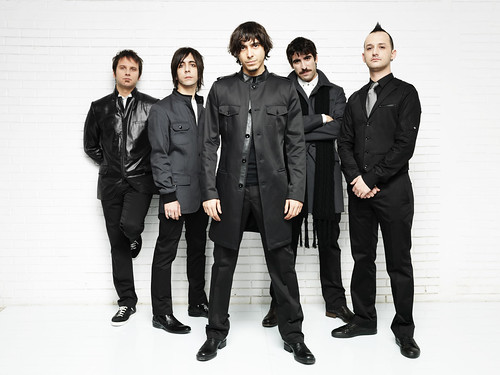 On April 1 wiwibloggs met with Europe’s top modeling agencies to determine which Eurovision contestants had the beauty and charm to succeed as international superstars.

After heated deliberations and a few broken stilettos, Wiwi invited 23 men from the Eurovision family to compete in the semi-finals of Eurovision’s Next Top Male Model 2010. Contestants from Britain to Belarus flashed their pearly whites, flexed their muscles and sang their hearts out to convince you they have what it takes to become Europe’s next big thang.  Following six weeks and more than 13,400 votes (7,440 in the semi-finals, 6,031 in the finals), Wiwi is proud to announce that Turkey’s Ferman Akgül is Eurovision’s Next Top Male Model.

The final results are as follows:

Ferman and his rap-rock band maNga were stars long before wiwibloggs began his search for Eurovision’s Next Top Model. In 2009, the group won “Best European Act” at the MTV Music Awards, and their single “Dünyanin Sonuna Dogmusum” (End of the World) topped the charts in Turkey and climbed to #335 in Russia (hey, it’s a big country with a lot of artists — give maNga some credit). Along the way the group learned how to rock black, and Ferman learned how to flirt with the camera. Here’s the video.

In a year of rather bland looks—Belgium’s Tom Dice seriously looked like a flight attendant—Ferman and maNga brought edgy looks to the table, as captured in their live Eurovision performance.

The Road to Becoming Eurovision’s Next Top Male Model:

During the first week of voting, Poland’s Marcin Mrozinski established himself as the early front-runner. Of the 1,136 votes cast, Marcin claimed an impressive 42% of them. Norway’s Didrik Solli-Tangen finished second with 17%. Norwegian voters, who didn’t like the photo that Wiwi selected of Didrik, accused Wiwi of trying to sabotage Norway’s campaign. Looking back, the photo does make Didrik look as if he’d like to cut someone with a razor blade. Wiwi is sorry. Anyway, Israel’s Harel Skaat, who Wiwi deemed the sexiest Eurovision contestant ever, finished the first week in third position with 15%. Turkey’s Ferman Akgul was in fifth position with 5% of the vote. (Coincidentally, Romania’s Paula Seling, the eventual winner of Eurovision’s Next Top Model 2010, was also in fifth place at the end of the first week of voting. Cosmic connections, people!)

With the Top Model House overrun with testosterone, Wiwi decided that two men had to go. A quick google image search of Belarus’ “Artyom Mihalenko” didn’t turn up any photos. Without a past, Arytom had no chance of a future and was sent home. Wiwi also booted Estonia’s Madis Kubu, mainly because his video for “Siren” was real creepy.

During the second week of competition, the death of Poland’s president and a number of the government’s elite forced Marcin Mrozinski to cancel Eurovision appearances and to delay the release of the final version of his Eurovision song “Legenda.” Wiwi’s voters respected his courage and kept him in first position with 35% of all votes. Harel Skaat, the jock from Jerusalem, finally made his move and slid into joint second with Norway’s Didrik Solli-Tangen, with both men claiming 17%. Spain’s Daniel Diges also surged, perhaps because Wiwi posted this photo of him modeling Calvin Klein underwear. Caliente!

The search for Eurovision’s Next Top Male Model took a sharp turn during the third week of competition. Fans in Spain and Turkey began to rally support on Facebook and Twitter, so Daniel Diges and Ferman Akgul pushed to the front of the pack with 30% and 24% of all votes respectively. Poland, Israel and Norway remained contenders with 19%, 9% and 9% respectively. Serbia’s Milan Stankovic saw a surge in votes after Wiwi published this shirtless photo of him. He finished the week in a solid sixth position:

Wiwi was feeling generous following the previous week’s bloodbath, so he made no eliminations.

After four weeks of voting and a total of 7,440 votes, Wiwi finally brought the semi-finals to a close. France’s Jessy Matador was the last contestant sent home. That left us with 14 men. Based on the semi-final results, there were clear favorites. Turkey had pushed to the front with 42% of all votes, but Spain remained a threat with 30%. Poland (10%), Israel (7%) and Norway (5%) would have to work harder to catch them in the finals. As we can see from the final results, Israel came closest—but none of them were able to stop Europe from indulging in a bit of Turkish Delight.

Ferman’s selection as Eurovision’s Next Top Male Model hasn’t been embraced by everyone. As you can see on this comments page, a number of Wiwi’s readers believe that Harel Skaat is the rightful winner and that he lost out as a result of the Turkish diaspora’s voting power. What do y’all think? Did Ferman deserve the title? Why are people upset? Did Britain’s Josh Dubovie deserve to finish last? And what exactly makes a good top male model anyway? Let Wiwi know below!

Backstage Reactions From The 2010 Eurovision Finale

“Love Me Back” Lyrics — Can Bonomo (Eurovision 2012, Turkey) | WiwiBloggs.Com

ferman  is the true winner

ferman akgul is the true winner

are you kidding?!?
of course ferman deserved to win! He’s amaaaaaazing <3
**and its not just turkish people who LOVE him – i'm british 😀

I m fan of maNga and Harel Skaat and I like them both Ferman and Harel!

You should see him close 4 real 🙂 Better than he seems on the photos! He deserved it! And yet nothing matters, there is plenty of people in Turkey finding him so attractive… No need for confirmation 🙂

Ferman was the right winner!!!!
He deserved to win! He’s so damn hot!!!
Greats to maNga and Turkey from all the portugues fans

Of coursee Ferman the bestt =)

Ferman deserve it! He is a very sweet guy with beautiful eyes and hair and he is simpatic too.Thats why he deserve it.

ferman has an exotic look, but it’s not mainstream enuff to be a model. to succeed in milan or rome you need to be white and thin, like didrik from norway!!

harel skaat? haha that’s so funny. even serbian guys is more attractive than him! hahaha