Wiwi and Vebooboo had high hopes for Britain this year. We loved the nudey photos, and didn’t think their song “I Can” was half bad either. But after watching Blue’s first rehearsal we’re shifting our allegiance to Hungary or Poland or Estonia or Azerbaijan or Bosnia—anywhere but here!

Wiwi: I’ve already sounded off on how these lyrics—about a break-up and then the reunion—are all about Blue’s own split. Given that they brought in five extra LED screens to display images of THEMSELVES I’m pretty sure I’m right. I’m also sure they are vain, vain, vain! Notice that the opening shots on said LED screens are of them shirtless (though only from the shoulders up; I imagine they didn’t want to offend the more conservative parts of Europe). This song totally rests on Lee’s shoulders. Thank God he’s been working out, or this whole thing could collapse. I’m not a huge fan of their blue outfits—they look like something a stripper would wear before he got naked at a bachelorette party. That’d probably be more entertaining. I’m kind of missing the non-stop arm-pumping from their official video.

Vebooboo: I’m confused as to why the boy band is still second among oddmakers to win this year’s ESC.  Blue is undoubtedly a known commodity throughout Europe, but their performance on stage in Dusseldorf this morning wasn’t worthy of a win.  There were as many pitch problems as there were gays in the audience…and that’s a lot.  And the song’s choreography was lame to the extreme.  It’s not a good sign when the most interesting thing about a live performance is what unfolds on LED screens in the background. 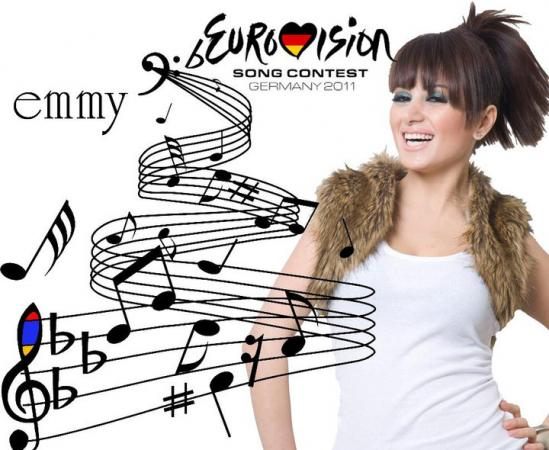 Poll: Armenia’s Emmy Will Win the First Semi-Final at Eurovision 2011