After watching and reviewing the first semi-final at Eurovision 2011, Wiwi and Vebooboo high-tailed it to the EuroClub afterparty held at the Quartier Boheme restaurant-bar in Düsseldorf. Plenty of contestants from the first semi-final stumbled over, and we cornered them to snap some pics and steal their alcohol.

Wiwi has been calling Croatia’s Daria Kinzer a brontosaurus for weeks. But her song “Celebrate” has turned into a guilty pleasure. The six-foot-four-inch singer proved to be as gracious as she is tall, and treated the crowd at EuroClub to the following performance. We give her 12 points for wearing a skirt that stopped a few feet north of her knees.

Daria was sipping on some sweet champagne after that performance, but she put down her glass to take some pics with us. Sister seriously had to curtsy to fit in our viewfinder. She looks much better in real life than she does on TV. Next time she’s on stage, Wiwi wants to see her au naturel!

San Marino’s Senit could have been the first contestant of Eritrean descent ever to win Eurovision. After her elimination in the first semi, though, she may have become the first contestant of Eritrean descent ever to finish last. (A first is still a first…) But the Italian-born singer brushed all that aside and proved she is still crazy fun as she gyrated and grinded — even to ballads! She also ditched her glittery paper sack from the semi and fashioned an oversized Adidas t-shirt into a knee-length dress. If only this were a fashion show…

Stella Mwangi was probably the contestant hurting the most following the first semi-final. The bookies had tipped her for months, and she shoved Lady Gaga’s “Born This Way” out of the way as she climbed to the top of the Norwegian charts. Outside the arena, Wiwi photographed Stella in tears. But at the after party Stella got her groove back, hit the dance floor and treated us to this impromptu performance of “Haba Haba.”

After a brief lull in Eurovision celebrity, Russia’s muscle-bound Alexey Vorobyov walked into the arena looking seriously Slavic and seriously fit. Wiwi touched his back and can confirm that his shoulders are strong enough to carry the weight of Eurovision glory! O. M. G. P.S. This is what he looks like wearing a football.

Earlier in the evening, Wiwi and Vebooboo were kind of annoyed when Blue’s Duncan James ran off to use the toilet and never came back. (What did he have for dinner?). We worried our chances of rubbing shoulders with the bisexual star were over. But a few hours later, as Wiwi discussed his Eurovision’s Next Top Male Model poll with Simon Webbe, Duncan appeared from nowhere and focused on another Wiwi. Wiwi and Vebooboo are exhausted, so are off to get some beauty sleep ahead of tonight’s party hosted by Russia. We’ll be back with some more pics asap. In the mean time, be sure to check out the hunks and babes of Eurovision 2011: 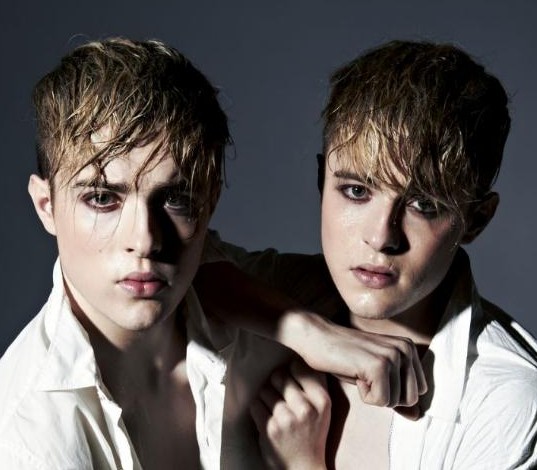