Forget Mother Russia. This year Eurovision voters in Moscow have elected to go with Grandmother Russia instead. That’s right. Buranovskiye Babushki—a group of six singing grandmas—have won the right to represent Russia at Eurovision 2012. Currently aged between 43 and 74, they defeated a number of big-name acts including R&B singer Timati and 2008 Eurovision winner Dima Bilan, who performed a duet with Yulia Volkova, formerly of girl group Tatu.

Although none of the Buranovskiye Babushki (Grandmas from Buranovo) have been alive longer than Britain’s 75-year old Engelbert Humperdinck, their combined age is more than 300 years. They’ll be singing their song “Party For Everybody” (read the lyrics here) in Udmurt, the language common in their home region of Udmurtia. The group rose to prominence when they stopped singing local folks songs and started deliveirng their own rendition of international hits in their native tongue.

Speaking to Russia Today, artistic director Olga Tuktaryova made it clear they are savoring every moment. “We still plant potatoes, grow cattle. We understand that interest in what we do may vanish at any minute,” she said. “Everything in life come and goes.”

If the group looks familiar that’s because they previously entered Russia’s national selection in 2010 with their song Kak zhit – “How To Live.” They placed third that year, losing out to Peter Nalitch (“Lost and Forgotten”). What do you think of their song? Gaitana Interview: Ukraine’s R&B Star Talks About “Be My Guest” and More 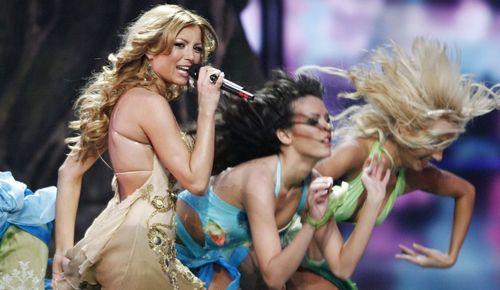 Poll: Who Should Win in Romania?

It would be nice if they did sth traditional like they did in 2010. But alla this “party everybody” and “come on and dance” is beyond degrading. Somebody in Russia decided to make fun of these wonderful ladies.

See, Switzerland? I told you to send Lys Motherfucking Assia. This year belongs to our great-grandfathers! The problem with banning trolls and funmakers, Christian, is how we define a troll. According to some people, Lordi, Verka Serduchka, the Latvian Pirates and even Dana International were making a mockery of the contest. According to some others, Trackshittaz and Anri Jokhadze are serious and respectable acts. Some Englishpeople say Engelbert Humperdinck is a joke act. But he’s got half a century of career behind him with one hundred million sales to boast, and once he even beat the Beatles in the charts.… Read more »

I think they are absolutely adorable! Everyone loves old ladies with lots of spunk! They’ve got my vote 🙂

This will make people turn against Eurovision. There should be some rules within the EBU that should save the Eurovision for any kind of jokers and fun makers. Countries sending in clowns just for the fun of it should simply have a possibility of a jury even before being announced to participate so that it should be craved for them to find a second choice.

WooHoo..This is better than Jedward! Love it! 12 points to Russia! Good Luck Grannies.

This is embarrassing for russia! I’m russian and I feel a little embarrassed now everyone is going to make fun of russia.

Wow. That may be even worse than Austria’s contribution. Congratulation Russia for not having to host the ESC2013.

Englebert will be spoilt for choice. !

This is going to be the Dustin the Turkey of 2012. It will either sink or swim – no middle. Top 5 or non qualifiers. Not sure what juries will make of it though