Yesterday in Baku heads of delegations representing the 42 participating countries stuck their hands in fishbowls, and learned where their ESC contestant will perform in the Eurovision lineup. Presumably 41 of those delegates had their fingers crossed they wouldn’t have to perform after front-runner Loreen from Sweden. Thirty-six countries drew for their starting position in the semi-finals, while the Big 5 + the host Azerbaijan drew for their position in the final.

Countries were previously allotted to the first half or second half of each semi-final during the semi-final allotment on January 25. Yesterday two countries in each semi-final received a wildcard and had the privilege of choosing their starting position. The remaining countries drew their positions afterwards.

Preliminary draw for the Final

The Big 5 countries (Italy, France, Germany, Spain, and the United Kingdom) plus the host, Azerbaijan, drew for their starting positions in the Grand Final. Spain drew the wildcard and chose to perform 19th. Azerbaijan drew the unlucky number of 13. The U.K.’s starting position may not conjure superstition, but it may be more unlucky: Engelbert Humperdinck has to perform first. 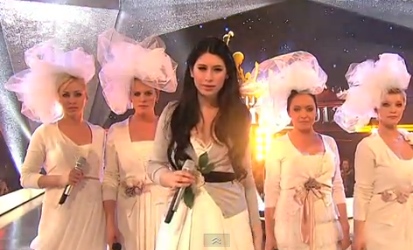 Engelbert Humperdinck Speaks with the BBC: “Waltz Me to the Top!”