Clothes make the man. But if you don’t have any clothes, it’s a good idea to have a seriously hot body. That’s something the men of Eurovision 2012 have learned since entering the semi-finals of Wiwi’s annual search for Eurovision’s Next Top Male Model. They’ve been working on their voices for the singing contest, but have been focused on their back, chest and thighs for this prestigious modeling contest. The time has come to see who has pulled it together—and who has fallen apart. The first elimination of Eurovision’s Next Top Male Model 2012 begins now.

Twenty-three mostly attractive men stand before me. But I only have 21 photos in man hands. These photos represent the 21 of you who are still in the running to become Eurovision’s Next Top Male Model. A total of 1,635 votes were cast during the first ten days of competition. At the moment we don’t have one leader, but two. That’s because the men who have aroused the most interest this week come as a pair. They’re known for their sky-high hair, and they already have experience posing nearly naked. They’re the world’s most famous set of identical singing twins and they may soon be its most famous male models. They are Ireland’s Jedward. Congratulations, John and Edward. You’re still in the running to become Eurovision’s Next Top Male Model.

In second place this week is a man who does both edgy and cute. A tattoo may span his chest from nipple to nipple, but his smile smacks of innocence and his expressions channel a boyish charm. He’s bringing some delicious wurst from Germany. He is Roman Lob. The contestant finishing third in our first elimination round is the only working model competing at Eurovision 2012. He’s already worked the runway, and has proven he knows how to smile with his eyes. Most of all he knows how to work it and be seen. He’s hot. He’s Iranian. And he’s ready to win. He is Norway’s Tooji. I still have 15 photos in my hands, but I’m sick of repeating myself and offering you congratulations. As such, I’m now going to name the men finishing in seventh through 19th position. These men are all still in the running to win ENTMM 2012. They are: Turkey’s Can Bonomo, Belarus’ Dmitry Karyakin, Serbia’s Zeljko Joksimovic, Moldova’s Pasha Parfeny, Lithuania’s Donny Montell, Iceland’s Jónsi, Estonia’s Ott Lepland, Switzerland’s Gabriel Broggini, Austria’s Lukas Plöchl, the U.K.’s Engelbert Humperdinck, Belarus’ Vladimir Karyakin, Switzerland’s Ivan Broggini, and Hungary’s Csaba Walko.

Would Manuel Hoffelner, Rambo Amadeus, Anri Jokhadze and the men of Izabo please step forward. Four men stand before me, but I only have two photos in my hands. These photos represent the two of you who are still in the running to become Eurovision’s Next Top Male Model. The two men whose name I do not call must immediately return to the House of Wiwi, pack up their low-rise skinny fit briefs and protein powder, and go home.

Manuel: You come from Austria’s Trackshittaz, and I’ve seen you photograph very well in your ghetto street gear. But you’ve only managed to capture 14 votes, and it’s clear voters prefer the other half of your group in Lukas Plöchl. Do we really need two people who shittaz on our track? Rambo: You proved your charm and intellect in our recent interview on the euro zone crisis. But you have a tendency to photograph best with donkeys. In high fashion, donkeys are not exactly in demand and we’re looking for an artist who can start booking jobs immediately. Anri: The Republic of Georgia has some of the continent’s most passionate Eurovision fans, but not even they are voting for you. You’ve only received five votes, and I presume they are from your family. Men of Izabo: You did even worse. You only earned four votes. And there are three of you in this group.

This is a tough decision, but the first man I am sending home is Manuel Hoffelner. Your counterpart Lukas has enough ghetto street edge for this competition. Please return to the loft and pack your things. Do not steal my towels or I will cut the transmission on your tractor.

The second person I’m eliminating isn’t a person, but a group. Men of Izabo. Get. To. Stepping. You haven’t taken this contest seriously, and none of you have gym memberships. Unacceptable.

Anri and Rambo, congratulations. You’re still in the running to become Eurovision’s Next Top Male Model. 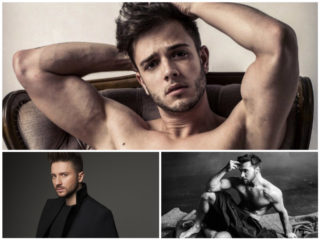 When do you make the second elimination for male models?

Olivia Preston… Looking @planetjedward yes? No, you’re not are you. The twins have said nothing about this poll lol. Look at the top pictures and tell me they aren’t attractive. It’s not like they don’t deserve the votes they got. If the twins had mentioned this poll they’d have recieved 50% of the vote, not a measley 13%

YES! Jamaraqueer I absolutly agree!!! And his voice makes him even more sexy!

jedward have asked all their fans on twitter to vote for them so it is an unfair ontest. These twins are cute but the other contestants are real men and would be far closer to winning if they had nearly 600,000 twitter fans backing them up. I am not bitter just sick of these two posers

It’s funny that Rambo Amadeus and Anri Jokhadze are still in the competition :))