The Wiwi Jury—our in-house panel of music unprofessionals—turns its eye toward Baku today to review Sabina Babayeva’s ESC 2012 entry. We’ve had the luck to interview her in London, and to hear her perform live in Amsterdam, so our opinions are seriously informed. When the music died did we cry? Or did we say “hallelujah”? Read on to find out…

Wiwi: We need to talk about Sabina. This beauty from Baku has the most amazing eyes I’ve ever seen, and she knows how to work her angles, as shown in this super glossy music video. Let’s hope she doesn’t have to hold a microphone at Eurovision: she uses her hands so much I’m afraid she might throw the mic at a jury member by accident! Eurovision is supposed to be about the song. But I can’t help thinking that her beauty and poise will score her a few more points than this song deserves.

Which leads me to my main point: Sabina is amazing, but her song “When the Music Dies” is not. Jazz doesn’t appeal to me, it doesn’t move me, and I just can’t get into it. She interprets the music beautifully—just look at the pain on her face! But I rather hear a good song sung poorly than a bad song sung well.

Vebooboo: She’s pretty and she has a good voice, but this song never goes anywhere and just let’s the music die. There may be a standing ovation in the Crystal Hall when Sabina takes to the stage, but I have a feeling all of those people will be from Azerbaijan! Baku, we love you. But we won’t be seeing you again in 2013. Meows Kitty: She has the voice of Christina Aguilera, and the song is well-produced and sounds very professional. But it’s also quite dull and literally put me to sleep. Some people say the song ‘grows’ on them, but I don’t really want to hear it for a second time to find out. Despite all that I think it may place quite well in the competition due to its commercial appeal and the usual voting tactics employed by the former Soviet Republics.

Deban: Great song, strong vocals and clarity of lyrics. Nevertheless, this is by no means a winning entry. It lacks the Cypriot punch, or the Irish gusto. Even in a sea of ballads, Albania’s Rona Nishliu is far more memorable, and showcases greater vocal range.

However, this is one of the most radio-friendly entries in this years’ selection, and certainly one that has great cross-over potential. What lets it down is that it isn’t strong enough to be a debut. This is the sort of pop number you put out as the third single from your fourth album. Your established fanbase would buy into it, but this won’t win any new fans. 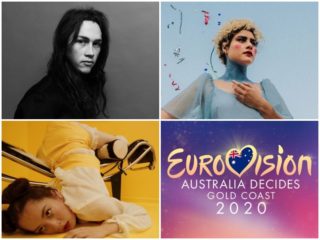 The Wiwi Jury reveals their favourites in Iceland’s Söngvakeppnin 2020

Love love love.It is stunning and beautiful and breath taking.Will we be back in Baku in one year?
If you ask me then the answer is:

oh my my i looooooooove her! THE POWER IN HER VOICE IS MESMERISING!

Quite a decent package from the host nation. The video is, to me, sophisticated; she looks good but that might not be enough to get them to the top five.

…All of which goes to show that ballads work at a very individualistic level of personal taste.

@Wiwi. Right. Our attention must be fixed on her alone. Her body language and even the ambient effects must seem to emanate from her emotional state. We need to see it from within.

i think that she is marvellous,her voice just crystal pure,i love azeri version of her song.anyway good luck amazing SABINA!!!LOVE U!

I really like this and think it is one of the strongest of the ballads this year. It’s slightly musicals but that’s not a bad thing.

We won’t be heading back to Baku in 2013 (thank goodness) but I expect this to feature in or around the top 10 mark.

Okay people, I understand that good/strong Eurovision ballads are hard to find but I think you are all going overboard with the comparisons here. Jamie Cullum? Amy Winehouse?? Christina ‘the voice’ Aguilera??? COME ON! She lacks what can be respectably called vocal range and the song is incomplete without the theatrical ommph every ballad with such a floaty music video requires. (Think ‘My heart will go on’ – Celine Dion, ‘Unbreak my heart’ – Toni Braxton, ‘Run to you’ – Whitney Houton) Nevertheless, I’m sure Ms Babayev will make it quite far thanks to her striking Kim Kardashian resemblance and… Read more »

@francisco: You still have a CD player? LOL. Can Sabina make it to your iTunes library? 🙂 Just kidding. I totally agree with you.
@alexandru: It is definitely a good overall package. Azerbaijan never disappoints me on stage!
@zolan: i hope she doesn’t bring on a male actor or dancer like safura. that annoyed me. as you say, staging is vital!

I think that this is one of the best songs in the competition. I mean, the lyrics are very well written and fit well with the music, the composition is very sophisticated and Sabina’s vocals are outstanding. Maybe a little minus lies in the fact that Azerbaijan is the host of the show and there is a lot of pressure put on Sabina as she wants her fellow co-nationals to feel proud about her and her result in the Eurovision Song Contest.

I agree with most of the reviewers. Her voice is amazing (think of a hybrid Jaime Callum / Amy Winehouse) but the lyrics, the rythm and the misse-en-scene are trite. Unless they try to upbeat the tempo and make a complete, wholesale reinterpretation, this song is going nowhere…certainly not to my cd player, that’s for sure

I have little patience for this style of music. I know it sells well in the USA, but in Europe? The song has some good points: The lyrics evoke a compelling emotional situation. The backing has a suitably mournful undertone, and the ending is perfect. There is some very fine vocal interpretation. But it comes across as a claustrophobic syrup of cynical cliche: The backing is predominantly a tediously soporific combo of washed out strings and pedantic drumming. She sings far too much in a projective vocal register that feels loud even when quiet. The occasionally affected pronunciation is too… Read more »

She needs to enter the Miss Azerbaijan pageant!

She has an AWESOME voice. But I think it’s fate will rest in the staging. If this builds visually it will make up for the song’s shortcomings

WHAT A BEAUTIFUL WOMAN! But you’re right: the song is just OK.