Every week the team at WiwiBloggs.Com combs through hundreds of reader comments so that the sassiest and most controversial comments don’t go unnoticed. Last time y’all dished on Anggun’s “Photoshopped” legs. But this week you guys are hating on everyone from Jedward to Eleftheria Eleftheriou.

On May 5 Wiwi launched the finals of his annual search for Eurovision’s Next Top Male Model 2012. In the first three days of competition you guys have already cast 890 votes. As of May 8 at 10pm GMT, Ireland’s Jedward had a narrow lead over the Men of Mandinga from Romania. “Adam from California, USA” was seriously confused that Jedward had made it to the top. He compares them to women who don’t eat. As he says:

Since when did girls think anorexia and androgyny were considered sexy traits in men? Really? That’s what girls want in a man? Someone please, give those two Jedward boys a stick of butter before they slip through a sewer grate. Ouch. “Jamaraqueer” did not take that well. He says that looks can be deceiving, and suggests that Jedward have plenty to offer. This is X-rated, y’all, so please stop reading if you are not 18 years of age.

@Adam: WTF? Jedward are seriously hot. I want to be in a Jedward sandwich. They’ll be the bread, but they’ll also supply the meat. They may look sweet and soft, but that only masks their animalesque masculinity. Tear. Me. Up. Jedward are Eurovision’s Next Top Male MODELS!!!

“MF” also had nice things to say. He says that Adam’s comments reflect the fact he is American, and apparently Americans are unhealthy so struggle to understand Jedward’s fit look.

Well apparently Adam lives in US and judging based on US people size he might feel entitled to his comments. But I live in North America too and I can say European people look better and healthier overall! I’m no fan of JEDWARD’s singing (and hair style), but they look good!

Team Wiwi tend to agree: Jedward are super cute and look perfect just the way they are. But Jedward aren’t getting that many comments on the post. It’s Turkey’s Can Bonomo who is dominating the chatter—and not because he looks exactly like Vin Diesel. Readers have suggested that Wiwi did not choose good photos of him. As “escsongs k5k5” writes:

Can Bonomooo is the cutest one and he is funny !! I didn’t like him before but his style, his hat and his interviews made my day and now im in love with him !! He is probably second Alexander Rybak for me

Can Bonomo is the best !! Kisses from UK

btw you should watch Can Bonomo’s interviews, especially the one with Kurt Calleja

And he has much better photos than these one

Leaving the models aside, Greece’s Eleftheria Eleftheriou has drawn some strong reactions since the Wiwi Jury reviewed her song “Aphrodisiac” on May 8. Among her supporters is Francisco. He writes:

Ooooooh! this is so cheesy and at the same time it is so much fun! totally silly and superficial, yes, but it is quite a joy to listen to and to look at…Better this than Nana Mouskouri

For those of you who don’t know, Greek-born Nana Mouskouri represented Luxembourg at Eurovision 1963 with À Force de Prier.

Anyway, Richard was less enthusiastic. He’s somewhat sick of the easy ride Greece gets at Eurovision.

For me, Greece is the one overachieving country every year. No matter what fodder they send they seem to comfortably qualify and finish well within top 10 (aided by constant high marks for the UK).

I think this will continue the trend. It’s totally formulaic Eurovision which in general I don’t mind but Greece seem to churn it out every year with very little imagination.

Guaranteed qualifier and I will dance to it but there’s a bit of me that wants to see it fail. Still I guess Greece are having a hard time of it and maybe deserve a bit of luck.

That’s sweet of him to say. Less sweet is the FIERCE competition taking place in our Eurovision Death Match between Cyprus’ Ivi Adamou and Greece’s Eleftheria Eleftheriou. We asked who you would want to see emerge from a cage fight, and you guys have cast more than 8,600 votes in the first five days. Eleftheria currently leads by 57% to 43%. But choosing between these two Cypriot-born beauties isn’t always easy.

That actually depends. On studio I’m all on team Ivi, and I like her song a lot better. But once they go live, Ivi just can’t give all her song needs, and Eleftheria rocks it. So… both.

Zolan struggled to make a decision. Amid all the cleavage and hip-shaking the ladies blur together:

Ever since I started trying to build a personal ranking of all songs, these two have been like conjoined twins; songs move up and down, but nothing gets between these two, and I’m constantly switching them around. It doesn’t help that they keep morphing into each other when I think of them (just like Wiwi, it seems).

What do you guys think? Do Jedward look like women? Is that a bad thing? Can Cyprus’ Ivi overcome Greece’s Eleftheria in our Eurovision Death Match? And does Greece really get an easy ride at Eurovision? 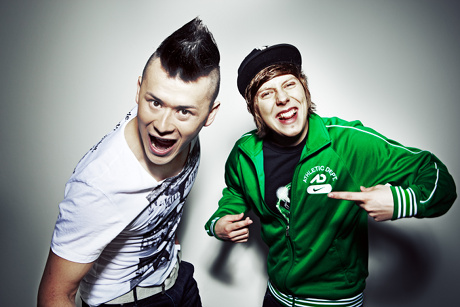 Greece’s Helena Paparizou wins #EurovisionAgain 2005 with “My Number One”

I don’t like mean and bad people.Jedward can look woman or men it’s none of our business!It’s a song contest for God’s name!
Some countries(especially UK) cannot overcome the fact that a little country like mine gets a good position the last ten years!How pathetic….Go Greece Go Eleftheria!

I’m from Greece and I agree that we always send almost the same stuff (pop song mixed with traditional music elements like bouzouki and lira),but I prefer Aphrodisiac anyway…I don’t like Ivi,she can’t sing,her voice is too ‘heavy’ for such a cheerful pop song…I remember her performances in the Greek X Factor,too bad…but Eleutheria really brings a delightful mood.And about Jedward…not everyone has to be like Max Jason Mai,there are the tough guys and the cuter ones,without all the muscles,but with more easy going looks…GO JEDS!