We launched our semi-final prediction polls on March 18. Since then Wiwi’s readers have cast a total of 15,514 votes to to determine who will win the first and second semi-finals at ESC 2012. In our fourth update, we see that Greece’s Eleftheria Eleftheriou, Cyprus’ Ivi Adamou, and Romania’s Mandinga remain in control of the first semi-final. Sweden’s Loreen and Serbia’s Zeljko Jokismovic remain the only contestants with a shot of winning the second semi-final. Can they hold on in the final days of our poll?

A total of 8,062 votes have been cast in the poll for the first semi-final. It closes at noon Baku time (8am London) on Monday, May 21.

Wiwi’s readers have cast a total of 7,452 in our poll to determine who will win the second semi-final. This poll closes on Wednesday, May 23 at noon Baku time (8am London). Poll: Who had the best first rehearsal on May 11? 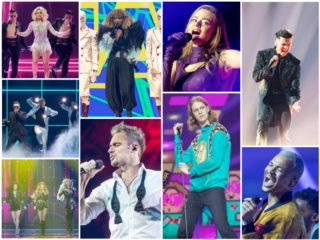 Poll: Who had the best first rehearsal on May 10? to that woman or man who said that kurt is gay ur so wrong maybe ur a woman or a man that u wish to go out with kurt or maybe ur a f—–g shemale . so dont judge people . go kurt u have a nice song and evrybody knows it no matter what happen .one think for shure u made the biggest eurovision dance this year people go and whatch it on tube and engoy it good luck europe from malta