Club de Mandinga, the latest album from Romania’s 2012 Eurovision contestants, was released in Romania, Hungary and Moldova in May. The album climbed the charts in those territories, and it’s now set for an international release in early 2013. Is it worth your euros?

There isn’t a straightforward answer. On the one hand, lead vocalist Elena Ionescu won the highly coveted title of Eurovision’s Next Top Model 2012. She promptly acknowledged her fans by posting video diaries to that effect. Bonus points for being Miss Amity. But can she sing? The answer is yes. Has she got good songs to sing? The answer is probably not. (Obviously I disagree with our Romania correspondent Bogdan who previously reviewed this album in May).

“Club de Mandinga” is a dull album that heavily disguises this fact with autotune, and plenty of melodic and lyrical platitudes. Mandinga as a band have an editing problem and this is reflected in their sound which fuses folklore, reggae, dance, europop, dubstep, trance and sometimes ambience. Tracks 4 and 7, “Party All Night Long” and “Europarty” demonstrate this musical ear sore. The faux-pas fusion occurs in most songs on the album.

Listen to ‘Party All Night Long’:

As a body of work, it takes you to a frantic beach holiday destination, but it doesn’t dock you at any shore. The trumpets echo Cuba in some tracks, but some of the beats that kick in could well be Angola. It’s fun to experience that in a compilation, but much harder to digest all those musical elements in one song. Fans of “Zaleilah” are treated to a remixed version on the album, but I dare say, the original sounds much better. Considering I’m not a fan of the original, that’s really saying something!

Deban Aderemi is a London-based correspondent for wiwibloggs Poll: Who Should Win Malta’s National Selection for Eurovision 2013? 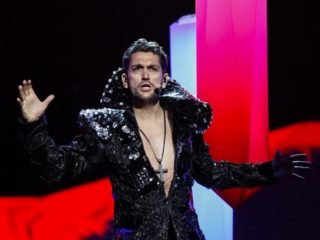 “As a body of work, it takes you to a frantic beach holiday destination, but it doesn’t dock you at any shore”

OMG, I heard Mandinga about 1000 times in Gran Canaria when I was just there in December. That’s the kind of album I want, to whisk me away to a frantic beach holiday destination, what’s wrong with that.

Well, let’s wait and see if this album will pass audience exam. Cat Music has a professional way to promote its albums, even the music is a mixture. The public will decide. Stay focus.

This type of repetitive, simplistic, and lazy dance music is what Eastern Europeans dig. I do agree with Deban that many of the songs are dull, but I am also sure that they had a high appeal to the originally intended target market. Not sure how the international release will go, though.