Walsh has made several attempts to break out of the girl group mold. In 2012 she made her West End debut by playing Princess Fiona in Shrek: The Musical. And she was a runner-up on the British version of Strictly Come Dancing that same year.

Yesterday, Supersonic PR—the group representing Girls Aloud—denied that the group was in talks with the BBC. But perhaps a portion of the group is?

Kimberley performs to “Crazy in Love” on “Strictly”:

Thanks to our ace reporter and Norwegian sister Geir for sending through the tip! 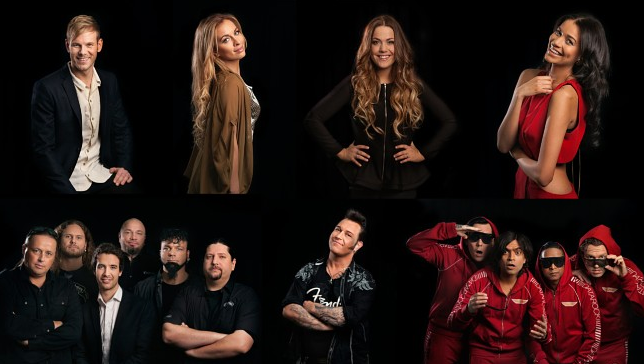 @David. Agreed. That’s why my speculations run to a more intimate, conversational style. Drawing the listener in, rather than reaching out to grab them, might suit her better.

Based on the “Rainy Days and Mondays” clip above – she’s not going to make the top 10 and will be lucky to make the top 20. She has a pleasant voice but there’s no depth to it. In a nightclub she would be really good. On a stage in front of 150 million people where you need to reach out and grab the audience – not going to happen.

…except of course that the song has already been recorded.

@Gavin. That would be a nice compromise. At least then Brits would feel invested in the song, and we could feel that it is more representative than something entirely from the BBC bubble.

Dam it … im looking at the price of a ticket to shreck.

I think it would be awesome if Kimberly was to represent the UK.

Ok dream situation… we have a choice of six songs, Kimberly sings them all… we get to vote! The focus would then be on the song and we would have a known singer.

My favourite UK selections were Sonia and Francis Rafel… where the artist was chosen but the song not… go on… make me year… and an hour show to choose the shows has to be more intresting than a special about… um…. Blue?

Another solo(ish, studio) performance:
“Another Suitcase in Another Hall”, http://www.youtube.com/watch?v=NHPlpKH7LPA

Seems to indicate a good direction for her; gentle, conversational, with an undertone of English folk. Additional oomph can come from the backing vocals and arrangement as needed. Nothing like Kempe’s previous ESC entries.

I did consider the possibility that the actual reveal would be that she’s paired with an even bigger name in a duet, but the ‘evidence’ suggests she recorded alone.

She can dance. Can she sing as a soloist?