Last weekend the Wiwi Jury, our in-house panel of music unprofessionals, caught the Eurostar to Brussels to review “Love Kills”—Belgium’s song for Eurovision 2013. Did Roberto Bellarosa charm us with his voice and glamour shots? Or did we leave lovesick in a bad way? Read on to find out.

HK Dick: I’m not quite sure how Belgium manages it but, yet again, they have found a truly abysmal song to enter Eurovision. Not only that, they have found someone completely out of tune to sing it. If there is any justice, Love Kills will have an early death.

Score: 1/10 (only because I have to give it something)

Alexander: Belgium seems to be one of the most-hated entries this year, and I don’t get what all the hate is about. I agree that “Love Kills” is a middle-of-the-road generic pop song, and that Roberto Bellarosa is a mediocre singer who needs to work on his English pronunciation. However, I think there are other entries this year that are far worse than this. The recently released studio version is an improvement of the song, but I’m not sure how well he will perform live in Malmö. At any rate, despite me not hating this as much as other people, I still think it’s not going to qualify because it’s generic and mediocre. Mr Häggkvist: The guy can sing, but the song isn’t that good. This is really mediocre for a song that billions will listen to. This is just the result of low interest in the contest and little investment of money in the production of a decent entry.

Vebooboo: He may sing about love, but a whole lotta hate is being thrown this singer’s way because of a) a horrible live singing voice and b) a song that just does nothing. On the first of the points, I’m more than ready to pick up a pebble from the road and join in the public stoning. But when it comes to the song, the first half is actually kind of catchy. The change of tune is painful, though, and really brings out the weakness in vocal talent. This will NOT make the final, but it will provide for a lot of laughs and heckles along the way. Poor boo, he gonna go home ashamed.

Deban: Last year, the Belgian voting public ditched ‘Safety Net,’ a much better song in favour of ‘Would You’. The end result: Iris tanked in our Wiwi Jury polls and failed to reach the final in Baku. This year will be no different. Roberto Bellarosa had a choice of three weak songs. The Belgian public chose the weakest of the lot (hear it live here). The chosen song is so off key it should have come with a strong warning. Bellarosa’s accent is so strong, he would have been much better off singing in another language. Overall, Love Kills encapsulates Bargain Bin Material; Demo Section. It sounds unfinished, boring, flat and totally forgettable. Even if half the competing nations pulled out of Malmö, Belgium would still not qualify this year. Bogdan: I know that “Love Kills” is considered to be one of this year’s flops. That being said, I like the singer’s voice and the lyrics have unexpected depth, in spite of the title. Moreover, the new and somewhat improved version seems to give Roberto an edge. He seems to put his soul on a plate and I am rooting for him. If he can sustain the song live as well as he did in the video, this might take him to the Final, but the rest of the competition – and not the viewers’ love – will kill Roberto there.

Wiwi: Love kills and this song makes me want to die. I see how the chorus could have potential, but overall this song is boring, boring, boring. The bridge is particularly weak. And Roberto seriously needs to practice his English pronunciation. It’s “love kills”, not “love cures.” Either way, another abysmal effort from Belgium. Why is it that their Junior Eurovision entries are always so much stronger than their adult entries? 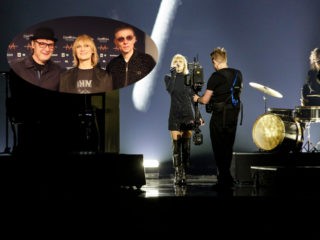 Honestly.. I dont get all the hating this song gets. Yes – the performer can by no means can be considered “attractive” or “handsome” Yes – his performance looks like a kindergarten talent show entry, with his deer in the headlights gaze DIRECTLY AT THE F***ING CAMERA But the song as a whole (and especially the chorus) is decent. A lot more decent than several of the other entries. His accent may not be flawless, but this is Eurovision and not Britvision or Amerivision, he is not the first or last performer to sing in english without being an honorary… Read more »

Having watched both versions, the re-engineered, pop-radio edit mix is a lot catchier and less flat. Digitally remumbled, it has improved but is unlikley to survive a live outing on the night. Belgium should stick to chocolate and detectives.

I don’t know whether the performance in the semi “will provide for a lot of laughs” or not, but the jury’s comments certainly are hilarious! :))). I can’t stop laughing :)))

Early indications in the song shows that he’s a novice singer. It is flat and does not stretch the singer, which is probably a good thing for Roberto, nor does it prolong the interest of the listener.

It’s been my running song of the week. I really like it and its one of my favourite entries this year… So long as I don’t have to watch the live performance. I agree his accent is really strong, maybe a wrong choice of singer? I bet Loreen could make it work.

Dull as dishwater.
And what’s the weird choreography about?

“Wiwi: Love kills and this song makes me want to die.”
Yes, it has the same effect on me.

I agree with Bogdan – if he can perform the new version ‘live’, so that it sounds like the recorded version – he’s in the final. Having heard the original version I have some doubts that he can – but – if he does – he’s in. The first semi final has about 9 female singers performing slow / power ballads – so there will be plenty of surprises in this semi final – its a hard one to pick.

Roberto can sing. But he’s being forced to sing a terrible song. #fail

Vebooboo and Deban, did you even listen to the new version? (There’s no key change in that version, and the last word I’d think to describe that version is “unfinished.”)

I’ve seen comments that he had the flu during the national final, but the broadcaster decided not to postpone the show. Given that we’ve only seen one live performance, I think it’s too early to conclude that he’s going to sound as bad as he did then.

I personally love the song, and I’m hoping for a strong performance. It’s probably in my top 3.

I find the song (the improved new version) quite catchy, I don’t see anything to hate here. To my ears, there are much worse songs around, some even in the same semifinal. Belgium is a borderline qualifier for me because the song doesn’t really stand out and there is a risk of Roberto not singing well on the night, but he certainly is my personal top 10 from that semifinale. What a shame for him I’m voting in the other semi …