William and Vebooboo spent Saturday evening inside Amsterdam’s Melkweg music hall for Eurovision in Concert. More than 20 acts performed, but a handful really stood out for exceeding our expectations. We’re not going to review contestants who were as amazing as we anticipated they would be (hello Ukraine!) but instead the ones that really surprised us. Note: We’ll be covering San Marino’s Valentina Monetta and Greece’s Koza Mostra in separate posts this week. Both of them were amazing.

1. Belgium. Roberto Bellarosa tanked with the Wiwi Jury, and his song “Love Kills” made us want to die. Things didn’t start out well for Roberto on stage at Eurovision in Concert either. His earpiece wasn’t working so 30 seconds into the song he actually stopped performing and insisted on starting over. But once he got going he was in-tune, full of energy and seriously got the club bouncing. “Love Kills” works really well as a dance track and we were pleasantly surprised to see a sea of Eurovision fans shaking their thing to this. Roberto went to a week-long boot camp in Finland—his songwriters are Finnish—and it’s clearly done him a lot of good. This might surprise all y’all and make the final. 2. Ireland. We’ve loved Ryan’s song “Only Love Survives” since the Irish national final. But the Wiwi Jury was concerned that his live vocals might disappoint. He wasn’t exactly Mariah Carey when he performed this live in Dublin. But sources tell us that his vocals suffered that night as a result of the small recording studio, and that the low ceilings made it impossible for him to hear himself. He gave that theory credence last night in the much larger Melkweg. His voice was totes amaze and his staging was fantastic. Before he came out his drummers performed a stomp-like tap dance number, suggesting that he’ll be integrating that into his act for Malmo. The aggressive drumming and tribal sound makes this a real stand-out. If he performs at Eurovision like he did last night expect great things! 3. France. Y’all have been surprisingly indifferent to France’s Amandine Bourgeois. When we posted a live interview with her from French TV, no one clicked on it. Here in Amsterdam, Amandine showed us that she is far more than a winner of a French reality TV singing contest. She pulled a heroine-chic look on us at the Melkweg. She looked angry and cracked out—a modern rocker chick with pure attitude. Her vocals were on point, she worked every inch of the stage, and commanded a presence that made a lot of the other acts look like amateurs. Really amazing. 4. Finland. Krista Siegfrids has more energy than anyone at Eurovision 2013. She and her back-up dancers ran around the press day screaming “ding dong” and throwing their wedding bouquets at people while singing their song “Marry Me”. We got kind of annoyed with them—they kept interrupting everyone else’s interviews with their noise. But on stage they were pure joy. One of the few acts to bring the entire possee, Krista had entertaining choreography, memorable costumes and some seriously exaggerated facial expressions. I have a feeling lots of people are going to vote for this. The staging turns an OK song into a really strong one. If the Wiwi Jury had rated her based on this performance, she would have scored a lot higher. 5. Malta. Gianluca Bezzina is very quiet in person and he isn’t one to draw attention to himself. But last night at Melkweg he proved that he can OWN the stage. His sweet number “Tomorrow” was one of the few that inspired a bit of audience participation with people singing along to the “whoa oh, whoa oh” bit. His voice is fantastic, in tune, and he has the likeability factor. With the right LED screen this could steal a whole lotta votes. Good job Gianluca!

Other acts that surprised us included FYR Macedonia, Switzerland and Georgia. Esma & Lozano now sing half the song in English and half the song in Macedonian. It makes it much more accessible. People loved when Esma strutted out with her headpiece and wobbly neck. She might get a lot of Buranovskiye Babushki-esque votes for being so damn cute. Switzerland’s Takasa also stole the early part of the evening. The audience hummed their anthemic chorus for, like, two minutes after they left the stage. Finally, we’ve never been into Georgia’s song. But boy can they sing. It’s rul rul emotional and their talent may be enough to elevate them into the Top 10 regardless of what they’re singing.

Photos courtesy of our friends at oikotimes.com.

You can listen to all 39 Eurovision entries on our contestants page. You can also read our latest reviews and see the current standings of our Eurovision rankings on the Wiwi Jury page. 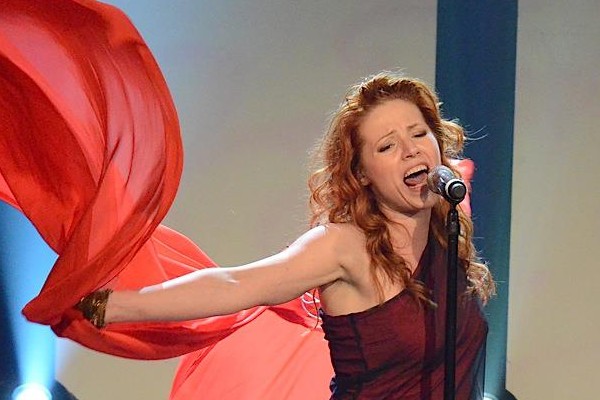 Belgium (after the revamp) and Ireland always were in my top 5. The both performances were not a surprise for me, definately.
Norway is still my favorite for win. BUT, if San Marino, Austria or even Switzerland or Ukraine win, I will be happy.

@Xander I’m guessing that guy was Krisko, who is known for numerous scandals, including that one time he and Elitsa were rumored to be more than just friends 🙂

We know Elitsa can sing, but her performance (along with the mystery guy’s dancing) brought the act down.

Wiwi, it’s funny how you can classify some songs…You give credit to Finland (for being silly?) and completely ignore some other acts, with much better songs

@Sokratis Great idea for an article! Were there any performances at EiC that were lower than your expectations, Wiwi?

After watching the Bulgarian performance on YouTube, I feel like the guy who performed with Elitsa was err…….he’d fit better with the Greek or Montenegrin delegation, lol.

France and Belgium also surprised me last night. Although when it comes to Malmö, I fear these two will have a tough time with the televoters next month.

SO happy to hear Roberto and Ryan were pleasant surprises. They have songs I’d really like to see make the final.

@Irish Lass: Ryan is in my top 5 of 39 this year…Not impressed with his performance last night though…I hope you’re just an enthusiastic teenager, so I’m going to ignore your insult 🙂

@NoName: Margaret wasn’t there, and neither was Denmark. This made me sad.

RYAN DOLAN WAS AMAZING LAST NIGHT. Anyone who says he wasn’t (MF) is on crack. That performance was SIZZLING.

Was Margaret from Norway there? She is my favourite this year. Followed by Valentina and Denmark. And Farid.

In my opinion the title of this post should be ‘FIVE CONTESTANTS THAT EXCEEDED MY/OUR EXPECTATIONS’… They certainly did not exceed mine…I was not there, but I listened/watched all performances posted on YT by ESCKAZ. I think, ignoring the noise and bad sound/acoustic, that all participants had pretty decent performances. From the 5 you mention, I would say France did not exceed my expectations as I already had a great opinion about Amandine and her song. It’s just that France is always underrated. I got the feeling the Europeans just don’t get the French songs! Ryan is one of my… Read more »

Malta was great, what voice, he can engage with his audience. I’m thinking this one could be the dark horse! My 12 points for sure.

Belgium SHOCKED me. He was finally performing like a pop star rather than some talent show winner