Earlier today the Wiwi Jury—our in-house panel of music unprofessionals—pulled out a map and tried to locate Skopje. We then hitchhiked our way to the Former Yugoslav Republic of Macedonia to review Esma & Lozano’s Eurovision song “Pred da se razdeni”. Did Esma’s cat-calling draw us in? Or did we want to tranquilize her? Read on to find out…

Vebooboo: If Hungary’s ByeAlex is my guilty pleasure this year, then this is the shit I hide deep inside my bedroom closet where nobody else can find it. But like all hidden secrets, this one is oh so good. Lozano opens up the song, and I get ruul ruul into the song on a normal level. Then add to that the unbelievably disjointed entrance of 8,000 year-old  granny Esma onto the stage, and I bust out into Eurovision euphoria. This song has no real value or merit, and everything it does by combining two clashing styles should make the song a huge flop. But I actually have a weird feeling this could at least make the Final, if only for comedic effect. If Russian babushkas can finish second, then perhaps Macedonian ones can make the top 25? Deban: After the unfortunate dissolution of “Imperija”, songwriters were drafted in to create another masterpiece. Although it is fair to say they’ve succeeded, there is one critical problem here. “Pred da se razdeni” is two songs squeezed into three minutes. Also, instead of being a duet, it ends up being a vehicle for Lozano. Esma, the real shining star, is left wailing in the background with two hidden back-up singers. This is no fun! If truth be told, it is highly disrespectful to a star who’s crafted a highly successful career in music and film. What’s the point of a duet that lacks cohesion, and then belittles the main star? This fact totally overshadows any merit this new composition possesses.

Mr Häggkvist: The worst song change I’ve seen in decades. This was a terrible decision and I think all of us know that although “Imperija” was not “Euphoria”, at least it was fun, catchy and I didn’t get as bored with it. I don’t understand why Esma is still in the project. I’m sorry but it looks like Lozano’s song.

Alexander: Unlike Bulgaria, I think Macedonia downgraded when they switched from “Imperija” to “Pred da se razdeni”. Even though it’s weaker than its predecessor, the good news is that it’s still a decent entry. Lozano’s parts in particular are well-composed and pleasant to listen to. However, as much as I love her, Esma ruins the whole thing. The lyrics she sings are really stupid. “Hi I’m Esma”– umm, okay? Her sections don’t blend well with Lozano’s either. It’s as if the producers took two separate songs and mashed them together. Even at the end when they sing side-by-side something feels off and incoherent. Obviously this was a rush job to meet the Eurovision submission deadline after “Imperija” was recalled. Nonetheless, it’s still a decent entry that could have been a lot worse. Bogdan: Yes, “Imperija” was so much better. This one here sounds like two different tunes squeezed into one for the sake of calling it a duet. Whereas “Imperija” represented an interesting blend of cultures (the point of this year’s ESC slogan “We Are One”), “Pred da se Razdeni” sounds like a clash of styles that work well individually but not together. It’s a mess! And Esma deserved more than basically being a featuring act on Lozano’s song…

HK Dick: Macedonia to Eurovision is like second cousins to weddings. You feel the need to invite them but they wouldn’t really be missed if they didn’t turn up. This is a car crash waiting to happen judging by the live performance. Poor Lozano must be wondering what he has done to deserve this. I expect this will be our unintentional comedy moment of the night. A total mess.

Wiwi: They say this is sung by “Esma and Lozano” but it feels more like “Lozano featuring Esma.” Does this actually count as a duet? It’s like they are singing two different songs. But guess what: I like both of them. Lozano opens with some fierce Macedonian R&B that seriously whets my appetite. Then Gypsy Diva Esma fills my pie hole with some delicious caterwauling that makes me want to shake my head like a chai wallah in India. It’s also good for a laugh: When she starts singings “lay-lay-lay” at the 2:30 mark I think Lozano should burp her! In any event this is my guilty pleasure—and I’m feeling real, real naughty for this one. 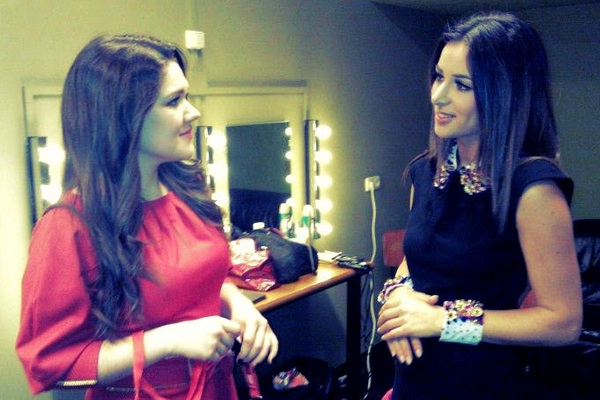 I was late to the game, so I didn’t hear Imperija before this. When I first heard Lozano sing, I was thinking,”Wow, who is this man with a sexy voice?” And then Esma came in and ruined it. Like some of the others said, it sounds like two separate songs that just don’t fit together. This song was a hot mess. I would have preferred the whole song to just continue the way it had started out. I then checked out Imperija, and that was better. At least there was that connectivity and flow. I would like for Vlatko Lozano… Read more »

I love this song.. Brill language hope It makes It

If a song can be schizophrenic, then this must be a good example!

I think Esma should go to some folk contest,this is not for Eurovision.

Rather disjointed and it would seem that Lozano is mildly irritated by all the (actually quite intriguing) wailing behind him. The lighting engineer seems to agree with him.

Greeks; some, not all, will ALWAYS look down on FYR Macedonia no matter what they send, they’ll always be wrong in their eyes, so it’s natural to ask “why not?” On the subject of the song, they both can use a bit of tweaking. Imperija easily could’ve removed the most controversial shots in the video, and maybe include some Romani and vocalization. That would’ve been easier to do rahter than to start all over again; it may even would’ve taken less work than revamping “Gravity” Razdeni needs more instrumentals, less pop beats and more harmony between the two. It sounds… Read more »

Actually, I disagree with all of you. This song is better than Imperija, and pure joy at that. Imperija had two major problems: one, that it offended a major voting partner in Greece (which is why the song was changed – Greek fans complained about the statue of Alexander the Great in the music video, claiming FYR Macedonia was stealing their history, and the fact that the song was entitled “empire” probably did not help), and two, that it didn’t properly let Esma do her thing. She was too controlled in Imperija, and it’s this sort of vocalization in the… Read more »

Will never forgive them. I thought it was damn impossible to even come close to Crno i Belo.
Imperija was an amazing song by it own merit and was a very good sucessor, then bam! Changed for this water-and-oil. Lozano’s great, but Esma is put to the side with a word-salad, stealing them all the duet-feel.

Seriously, European people’s opinions this year are NOT helping.

Singing in gypsy can’t fail you as there are gypsies everywhere an most of them have mobile phones!