Sometimes an artist isn’t fully appreciated on stage, and he or she has a better chance of making it at sea. Just look at the talented performers working on Carnival and Royal Caribbean Cruise Lines. They may not be household names, but they entertain thousands of people who have paid to sit on large boats for weeks at a time. This award isn’t an insult, per se. Rather it’s recognition that an artist sometimes needs a bit of help gathering an audience. There’s nothing wrong with performing next to an all-you-can-eat buffet.

The Wiwi Jury selected five artists who struggled to reach the top of the scoreboard (or even make the final) at Eurovision, but who have that je ne sais quoi that might land them a job on the seven seas. After counting 1,751 votes, we are pleased to announce that Slovenia’s Hannah Mancini has won the 2013 Pirates of the Sea Cruise Ship Award.

Hannah, who we dubbed an American Sweetheart after a fun interview with her at Eurovision in Concert, came last in the first semi-final of Eurovision 2013. Her song had an amazing opening, and she helped drive this year’s biggest Eurovision fashion trend: wearing black from H to T. Yet for whatever reason Eurovision voters just weren’t feeling it. All I know is this: If I was on a cruise ship and she dropped “Straight Into Love”, I would jump straight onto that dance floor, martini in hand.

In 2008 Latvia’s Pirates of the Sea dressed as sea-faring bandits. They didn’t have the strongest voices or the best stylists, but their up-tempo number “Wolves of the Sea” still placed 12th in the grand final. This award honours their can-do spirit and the fact that being successful doesn’t always mean winning. Sometimes it means grabbing your flotation devices and singing your heart out on a boat. 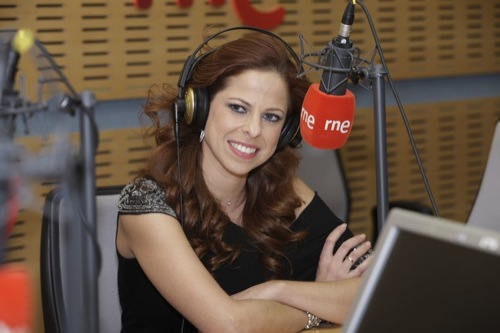 Slovenia: Ana Soklic will sing at Eurovision 2021 in Rotterdam

For next year, we should have a “Most Likely to Become a Street Performer” award– a little different than cruise ship, but it’s not entirely insulting either because a lot of street performers are proud of what they do. For this year, I would nominate Andrius Pojavis, PeR, and maybe ByeAlex.

Funny, my first thought was that being in a confined space with “Solayoh” performed would be pretty uncomfortable. Hannah’s the best pick — basically conventional with a dash of interest to avoid being dull.
I’d also keep Birgit on for the Karen Carpenter vibe.

Hannah is more gay cruise than Carnival cruise. I’d give the straight cruise award to Alyona Lanskaya. She is pure cabaret material!!!