I think I can speak for everyone when I say Krista Siegfrids’s wedding dress was the only suitable option for the presentation of “Marry Me” on the Eurovision stage. But apparently Krista’s dress was not the only Eurovision dress suitable for weddings.

Birgit Oigemeel’s bedazzled white shower curtain is in high demand across Europe, at least according to Karolin Kuusik, the dress designer.

Kuusik noted that the frock “has received a lot of compliments” and that “some women have thought they would want the same dress for their own wedding or anniversary.”

The designer was surprised by the overwhelming enthusiasm. But Rutt Ernits, a journalist for Estonian broadcaster ERR, believes such reactions are only natural given the magical flowing beauty and simplicity of the dress.

Sure, Birgit, five months pregnant, had a beautiful glow on the Eurovision stage. And knowing a tiny Estonian singing superstar was on its way is surely reason enough to allow Birgit’s sails to blow in the dramatic wind we know and love in Eurovision ballads.

But on the first Monday after Eurovision, during an interview with Estonian broadcaster ETV, Birgit’s top was looking rather tight! Pretty cray if you ask me…

So what do you think? Was the Estonian delegation playing up Birgit’s pregnancy? Would you order Birgit’s dress?

Bart P contributed this report from Latvia. Follow him on Twitter at @eestilatvija. Then follow the team from wiwibloggs.com at @wiwibloggs and keep up with the latest Eurovision news by liking our Facebook page. 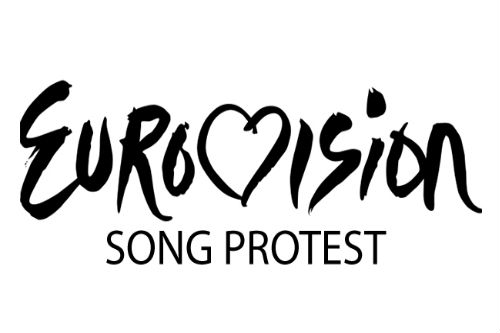 Eurovision 2014: A Protest Song for Bulgaria?

And Eythor Ingi’s for the groom?

It reminded me of Miss Universe 2002 Oxana Fedorova’s evening gown, who coincidentally presented the Russian votes in 2012.

Margaret Berger’s dress was the best! 🙂