We admire all of those brave enough to sing a Eurovision song in their national language. It’s better than attempting to sing in English and fluffing up your lyrics. But unfortunately the majority of us don’t understand what they are saying, so we tend to infer (wrongly) what they mean. We have gathered our top 10 non-English songs with the most commonly misheard lyrics, so you can all feel guilty about the fact that you make a mockery of a country’s language and culture! Shame on all y’all. Although some of the lyrics do sound quite funny…

When Marco Mengoni sang the chorus to his beautiful ballad “L’essenziale”, all the Italians would have been singing along to final lyric “che da sempre, sei per me, l’essenziale”. The line translates as “from the beginning, you are for me, the essential thing” and those Italian speakers would have grasped the meaning of this delightful love song. But unfortunately for us, the song was giving out a completely different meaning. For the non-Italians, Marco was demanding Charlie to “kill a zebra, save for me, listen charlie”. We assumed the last line meant what it sounded like! Turns out “L’essenziale” meant “The Essential Thing” rather than “Listen Charlie”. Well I suppose there was a slight clue in the title…

Not even the Albanians could understand Adrian Lulgjuraj and Bledar Sejko as they yelled over the explosive guitars in an attempt to sing at the semi finals in Malmö. The lyrics “gjuhë po kërkon, Eshtë vendi ku u linde, rrite” translates as “this language asks for, It was a place where you were born”. To all us English speakers, it sounded something like “two broken corn, spin me over Liver River”. FYI, the Liver River is not an actual body of water. I’ve googled it. The performance was funny enough without us attempting to interpret the meaning of their lyrics, but even if we were able to speak Albanian, we’d be too busy laughing to make any attempt to understand exactly what they were yelling about.

The 2013 Cypriot Eurovision entry was a ballad about “love and loss”. Well, it was for those who could understand the Greek lyrics. For the rest of us, it was a ballad about tea. Even the opening lyric sounded exactly like “your tea, yes it’s hot” despite it translating as “If you remember me”. To all us English speakers, the chorus was interpreted as “I made tea myself”. Quite a contrast to the Greek speakers who interpreted it as “If you remember me, tell me if I will see you again, I wait for you, I will always be there for you”, probably more towards what Despina intended. We shouldn’t expect any less than a tea related mishearing from a British stereotype, drinking tea and watching Eurovision!

When Eva Boto performed “Verjamem” at the semi finals, we thought some serious Eurovision politics were about to go down! With the majority of Eurovision viewers not able to speak Slovenian, we heard the lyric “z reko lui” as “Zeljko you cheat” rather than realising the actual translation was “yesterday will return for good”. We all thought for a moment that Eva was accusing 2012’s Serbian participant Zeljko Joksimovic of cheating before the voting had even began! Unless we plan on learning to speak Slovenian anytime soon, we shouldn’t assume Slovenian words that sound like English words, mean the same thing as English words. No one wants to stir up trouble between the Serbians and Slovenians!

As ByeAlex demonstrates, Hungarian has the tendency to sound a little like “mish mosh mash” to the rest of the world. His entire song “Kedvesem” was all a huge misheard lyric to most of us, with even the title of the song sounding like “cat rush out”. I suppose that’s slightly justified considering ByeAlex performed with a background of scary looking cats behind him. The line “Bárhol jár, az úgy jó nekem, az úgy jó nekem” actually translates as “there is no other, only my sweetheart, my sweetheart”. So it’s quite a shame that we picked it up as “Buy a yak, a zoo yawn again. A zoo yawn again”. As much as we love visiting yaks at the zoo, realising that this was actually quite a sweet little love song would have been better for all of us.

When we hear Rona Nishliu sing, we focus more on her amazing voice rather than the lyrics of her song. But to the non-Albanian speakers, her lyrics did seem a bit weird. It sounded to us like she opened the song by saying “mmm… nectar pot”. Turned out she actually said “Në këtë botë” which is Albanian for “In this world, love lives no more”. That definitely makes more sense then “nectar pot” considering the fact that by the chorus she is wailing. To the English speakers, Rona seemed to be yelling the world “shy” over and over during the chorus. But the Albanian speakers knew she was yelling “Qaj” which translates as “cry”. The English speakers almost had one right! Almost… well, it rhymed.

To all of us that don’t speak Estonian, “Rändajad” seemed to be a bit like a morbid to-do list. Any English speaker would think the second verse sounded a lot like “Kill Bono, hang him, buy soda”. Well, it looks like U2 won’t be playing in Estonia anytime soon. The actual Estonian lyrics are “Külmunud hingi vaid saadab” which translates as “It carries only frozen souls”. Oh. That’s not any more pleasant than how the English people thought it sounded. It looks like no matter what language you speak, or whether you understood the correct lyrics or not, everyone was a bit scared of Urban Symphony.

We all look back at Alf Poier’s Eurovision “song” and cry a little inside. The German speakers, who could actually understand the lyrics, probably more so. Austria’s 2003 Eurovision entry was about the animals of the world, incase it wasn’t obvious thanks to the cheap cardboard cutouts behind him. One of Alf’s lyrics, “Doch am allerliebsten mog i, Die-die Haserln und die Bärn” translates as “But more than anything, I like the hares and the bears”. All of us English speakers were forgiven for thinking he said “Incase he’s hassled on the barn”. There’s animals behind him… and the English word for barn sounds exactly like the German word for bear… there’s logic in our thinking!

Oh, Trackshittaz. You really don’t do yourselves any favours do you? For a start, was “Trackshittaz” really the best name for the band? Are you sure it wasn’t a joke when someone suggested Trackshittaz would be a good idea? As if the name wasn’t bad enough, Austria’s 2012 Eurovision entry was entitled “Woki mit deim popo” which translates from German to English as “Shake your ass”. The original German lyrics are actually just as bad as what us English speakers think the lyrics sound like, so we all had the same interpretation of that delightful little song no matter what our native language was. Here’s a tip Mr Trackshittaz, if you insist on having such cringey lyrics, speak slowly enough so people understand that you’re just a terrible songwriter, rather than someone who insists on swearing constantly in the chorus.

Okay, let’s be aware that we didn’t expect anyone to be listening out for the lyrics when Verka performed at Helsinki in 2007. We expected everyone to be either hiding behind the sofa or to be in a trance thanks to all of that trademark tin foil! But poor Verka almost caused World War Three when the title of his song was mistaken as a pretty huge political statement. The majority of English speakers thought “Lasha Tumbai” was actually “Russia Goodbye”, making the chorus of his song “I want to see, Russia goodbye!”. He’d confused all us all enough, especially the non Russian, German and Ukrainian speakers before the chorus, so by time he’d got to the chorus, we were all pretty freaked out. Well there’s one for the history books, “Ukrainian Transvestite Causes War With Russia”. Oh dear. Well, when it’s Eurovision we’re talking about, anything is possible! Jedward on BBC: “We’re Never Going to Split Up!” 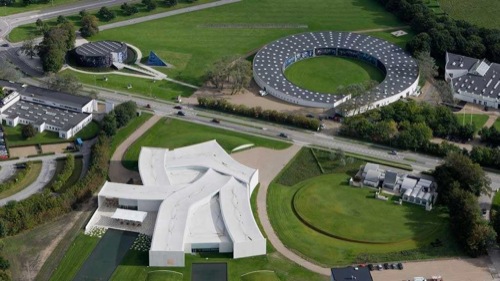 Editorial: Why Herning Should Not Host Eurovision 2014

Sure she was singing Shut the door

When listening to Alcohol is Free last year, I always thought it opened with “Freaky freaky Mia”.

lmao definitely changed the way I’ll hear some of the songs. & also there’s the “Ljubav Je Svuda” as “Lube up your scooter” 😀

Sorry about not including the link. Here it is! http://www.youtube.com/watch?v=rdkonNywFr0

Watch this misheard version of Verjamem (the song will never sound the same again). I don’t know whether I love or hate the creator.