In her official preview video, Kristina Pelakova fooled us into thinking that she could sing—and that she had the nerve to do so in front of millions. But when this Slovak beauty took the stage at Eurovision 2010 she seemed to lose her voice. Nerves led to pitch problems. Not even the troop of male back-up dancers and a lady shrieking “Hallelujah!” could save her. She finished 16th out of 17 acts in the first semi-final.

Months before Eurovision she took on the role of a sexy wood nymph. Her song “Horehronie” was an environmental anthem meant to inspire conservation efforts in the Slovak forests. Activists loved it and bookies did too: They consistently ranked it as one of the three favourites to win the first semi-final. Here’s the video that sparked all the hype.

Along the way Kristina faced a major scandal. Albanian music enthusiasts leveled accusations of plagiarism. When they heard “Horehronie” it sounded like Valle Kosovare’s “Shpat Kasapi”. Then the team from wiwibloggs.com had the audacity to suggest she was copying Ruslana’s choreography.

On the night of her semi-final Kristina performed fourth in the running order. Estonia’s Max Lincoln went third and Finland’s Kuunkuiskaajat and Latvia’s Aisha followed Kristina. None of them made it through. Was Europe in the bathroom during this segment or what?!

Here is Kristina’s live performance which does not feature any digital re-mastering. Even when you take the vocal component out of this, something just feels flat. Young Kristina wasn’t just competing against 16 other acts. She was competing against herself. Bless her.

So what do you think? Did Kristina deserve to finish next-to-last in her semi-final? Was performing fourth in the running order her downfall? Or was the song just bad? Let us know in the comments box below! 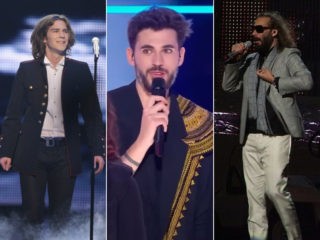 One of my all time favorite Eurovision song.

This song SOOOOO should’ve qualified! It’s so unique and original! It DEFINITELY should’ve won that semi-final. The only problem was that it was placed in the middle of a bad song gap along with Finland, and then EVERYONE assumed EVERY song was bad in that gap!

The words were also a harsh (ie the “r” in Horehronie), and we didn’t get to see the weird dance crew.

The live vocals aren’t that bad (Eleftheria and Ivi, god what a mess), I will have to agree with Nirgal on this one. Her last name is spelled Peláková, by the way.

Whatever is said about the song, I still like it – both the song and the performance. I still think it deserved a place in the final.

I think the main problem here was that the act was amazing… and we got to see none of it. The camerawork was all too close, too far or too skewed in 90% of the takes, so it was impossible to see what was happening in the stage. For me, that’s the biggest mistake there. Also, the atmosphere was colder and the vocals were not as good as they should.

Then I didn’t know why was all that hype around this song, but now I kind of like it. It was a good performance. She should’ve qualified.

The song is actually very good in my opinion, but I think the thing that killed it was the staging. Her live vocals are good but definitely not great. But hey, if you close your eyes while listening to the preview video it sounds pretty cool!

actually that albanian song is a rip off of an old romanian manele song costi ionita- necazuri si suparari ! so the albanians shut up on this

on slovakia, i liked it back then, lost interest after the semis! one of my friends never understood why i liked it…

I have to agree that her vocals weren’t there, but the performance seemed odd. It was way too dark and you could barely make out Kristina most of time. I think it should have at least reached 13th or above, if the actually staging was better. But I have to say, under similar circumstances, how did Moldova qualify?

Awful singing and costumes that appeared to be some foliage duct taped on. There was nothing good in that and it should have placed 23rd (out of 17) – it was that bad. And they want to repeat that disaster…

My issue with this song: I was not surprised with the poor result considering her awful vocal performance. Again all these eurovision singers know how to sing in a vocal booth in a studio recording but then forget how to do it the old fashioned way: LIVE. But worse than that is the whole “shakira-etno-upbeat-crappy-production” of the song that I just can’t stand: not my thing which is disappointing considering the beautiful melody. An awful voice with a terrible production … surrounding such a wonderful melody: it was criminal thing to do, Slovakia. Then the piano version came into my… Read more »

Loved the song (still do!), but the performance killed it… and not in a good way.

Ah, deforestation explains why she is wearing all those dead shrubs 🙂

Umm…I think 16th place was too HIGH for this. She should have been 17th! The song kind of dies after the first chorus

she was robbed. i’m sorry, how did peter nalitch from russia advance over this? i feel bad for small countries at eurovision!!