Switzerland’s Die Grosse Entscheidungsshow doesn’t take place until February 1, but the Swiss national selection has already been keeping us busy. We’ve already met or discussed the Brit, Cypriot and Pole attempting to represent Switzerland at Eurovision. Earlier today we had the chance to catch up with Derek Liontis, a Greek singer with the same ambition.

Derek, a 29-year-old from Athens, has worked as a dancer, model, and DJ. Locals know him as “the boy with the hundred faces” because he is prone to changing his style. But, more than anything else, Derek is a singer and songwriter. In the interview below he tells us about his dream of representing Switzerland at Eurovision and about the pain that inspired his entry “Live Without You”. 1. Could you tell us about your song “Live Without You”? How long did it take you to write it? What is it about?

“Live Without You” is not just a song to me, but a part of my life! I wrote that song when I lost my big love. “Live Without You” is everything I felt and I’m still feeling after all of these years. It talks about the feeling when you lose someone you really love, and you know that you will never be together again. You also know that you will never see this person again, and you will not have any communication again for no reason. It is like a little death of love. It is all that I wanted to say, but I couldn’t. That’s why I send this song to the Eurovision Song Contest—because I wanted to give my heart to Eurovision, not an ordinary song! It took me only one night to write it, but that night it was the night of my life!

2. How would you describe your style or genre of music? If people like “Live Without You” would they also like your other music?
My music is just mainstream, sometimes rock, sometimes pop, sometimes R&B  but most of all dance. Every single track I write has a musical personality. I want the music to express the lyrics…but for the people who loved “Live Without You”, I will not disappoint them with my other ballads. My ballads are always atmosphere and pop rock! I want to play with all the genres of music, because music helps me to express my feelings!

3. Why did you decide to enter the Swiss national selection? Do you think that you would be a good representative of Switzerland?
I did it because, first of all, Switzerland gave me the opportunity to do it and second because I like the music history of Switzerland in Eurovision—great songs and great voices. “Live Without You” can definitely help Switzerland to take a good place in Eurovision. Greece and Cyprus will vote for me, and I am half Italian too, so Italy is going to vote for good too, I believe! But the most important is the song. “Live Without You” is for everyone who left someone beloved behind. All of us have missed someone we really loved from deep inside our heart… so “Live Without You” speaks to everyone’s heart, that’s why I believe, it is the best song to represent Switzerland in Eurovision Song Contest 2014 in Copenhagen. 4. Have you listened to the other songs competing in Switzerland? What do you think?
Yes, I heard all of the songs… and I can say that I liked them a lot!

5. Do you have a message for our readers? What else should they know about you?
To be honest, from the first day people from all around Europe have sent me messages wishing me to be the one who represents Switzerland in Eurovision… people from other countries they vote for me and they get fans of my work! It was a big surprise to me, but the most important surprise was that famous librettists from Spain, France and other countries of Europe they want to send me their lyrics, to sing “Live Without You” in their languages.

Something more that I want to say? Hmmm….Ok , if I will be the lucky one  who represents Switzerland in Eurovision Song Contest in Copenhagen for 2014, I will re-orchestrate my song “Live Without You” to more rhythm using a dupstep beat, and the violins are going to be more…. Because I want to give a super festival performance and make Switzerland proud for my nomination!

You can listen to Derek’s song “Live Without You” on the Swiss Eurovision Platform. Then you can vote for him by clicking here and rating his song (the more stars the better). To learn more about Derek you can visit his web site. 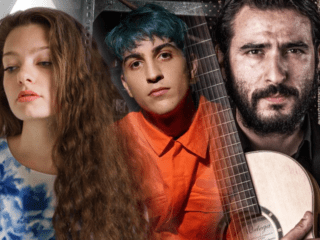 I am a fan of Eurovision for years and I belive that that Switzerland is so lucky… Swiss has the choise to win a great place at the Eurovision Song Contest this year… With the amazing Derek Liontis, he is so sexy, handsome and his voice is essential and unique! Derek Liontis and “live without you” is of course the best choice for Switzerland in 2014 !!!

OK… I have no words! the song is incredible and the boy is a prince! He can be the prince of Eurovision for 2014. Words are not enough to describe this amazing Singer! RESPECT to his talent, and as I read he is also the songwriter. OK… he should represent Switzerland to ESC 2014 , nobody else! Derek is amazing… and the song is incredible !

SONG: 100% SMASH HIT
ARTIST: 100% SEXY
12 POINTS FOR SWISS IF THEY CHOOSE DEREK LIONTIS AND LIVE WITHOUT YOU

I heard all of the songs, i couldnt find any better of “live without you” , this song it is a Eurovision song for sure! and Derek is so handsome and all the Eurofans are going to love him. LIKE

For some odd reason… I want to sit on his face.

OMG the song is amezing, and Derek is super for Eurovision, I want him to the final night on stage in Compehagen …. Derek as I red on his website, is half Greek and half Italian, that’s why he is so sexy… mmm! my vote for live without you , with no second thought

Derek Liontis, is soooooooooo HOT & SEXY! and the song “Live Without You” it is a 100% Eurovision Song! I wish Swiss to select that hot stud, he is so gorgeous, the best to represent Switzerland in Copenhagen for 2014! 12 points to Derek Liontis <3

Not a bad tune. I can see it making it to the NF if he’s lucky 😀 Maybe the juries will like him