If you look hard enough there’ll always be a link to Eurovision.Or at least that would seem to be the case. For who would have thought that critics’ favourite du jour, Lorde, was a fan of manband Blue? Speaking to “The Observer” she shared her thoughts on Blue’s “One Love”, the first song to ever catch her imagination.

That was a gem. I was always drawn to songs with that innate catchiness.

Aww, ain’t it sweet when one of the cool kids admits to liking a good dollop of manufactured pop. The lads in Blue sure were happy to read her comments and took to Twitter to share their apprecitaion.

.. @lordemusic – Glad we inspired you & we don’t doubt you are now busy inspiring the next generation. All the best to you. #OneLove

Hey @lordemusic loving ur music! Just got back from the states and have “royals” stuck in my head! Thanks for the love 🙂 xx 1?? xx

However, Lorde’s musical tastes have changed somewhat in the intervening years (she was 6 when “One Love” was released):

I look to Kanye [West] for inspiration in a lot of things, and his ability to kind of reinvent and keep throwing curveballs with each record. He’s able to keep things interesting

Unfortunately, there’s no word on what she thought of Blue’s Eurovision effort “I Can”. Until she says otherwise, I think we should assume that she was a huge fan of it, and by default Eurovision. Agreed? 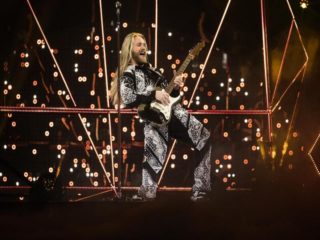 Meh to me, Blue is millions more times better 😀 I’m not really into rap, so I admit I do have a bias there, but a lot of things he raps about is ignorant anyway..

@Padraig Jude: You know nothing about this girl (after all it’s not Eurovision material .. until the day she takes a pill and decides to particiapate) and you know nothing about me. But one thing is clear: she is just being sarcastic about these “guilty pleasures” of a 6 or 7 year old who looks back in time asking herself “what was I thinking” like literally everyone in the world. She loves Blue as much as she loves everybody else she’s been amusingly bashing in the media. I can only wonder what she would say of a Serduska or Conchista… Read more »

@Charles seriously why would she be bothered. Unlike you the rest of the human race have guilty pleasures. We’re not all fun hating robots.

@Padraig Jude: Do you expect me to believe that at 17 now she is seriously looking back at he childhood music taste and praiseit , to consider it “a gem”? A girl like her that is making sure everyone knows how upfront, critical and opinionated she is against everything and everybody? Seriously? Come on …

@Charles You definitely are. She was only 6. What would you expect her to like at that age?

Awkward moment when Kanye was listed as an inspiration lawl. From Blue to Kanye, sad times.

Am I the only one who actually thinks this girl is being nothing else but sarcastic?

i only listened to Royals and Tennis Court and they are both great!!!

I love Lorde and this makes me love her even more!