Another year, another long wait for Valentina Monetta to reveal her Eurovision entry. Fortunately the wait appears to be over. Ahead of tomorrow’s live song presentation show “Verso Copenhagen”, Valentina has released a snippet of a song called “Maybe.” There has been no official press release or public confirmation, but all signs suggest this is her official entry. Amazon lists the release date of “Maybe” as March 14, which coincides with tomorrow’s song presentation. And it’s also billed as the “ESC Version”.  Hmmm.

There’s more. The song has an Italian version called “Forse” (ESC Version), which suggests that Valentina has not yet decided what language to sing in at ESC. Let’s have a listen to the English version.

Update: the full version is now out!

Despite competing three years in a row—a feat matched by Switzerland’s Lys Assia—Valentina has never made the final. Her best finish was 11th in 2013 with a much-hyped song that was predicted by many to win but failed.

Do you think this is Valentina’s song? And does this preview suggest it’s a winner? Let us know in the comments box below.

To listen to the snippets or to pre-order the album click here. The full version of the song together with the video clip will be released tomorrow at 21:10 CET in a special television show called “Verso Copenhagen”, with live broadcasts on sanmarinortv.sm and eurovision.tv. 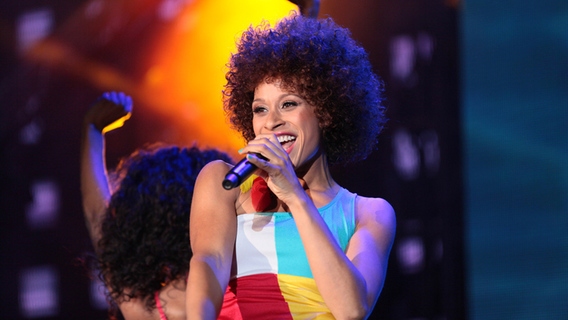 This is my favorite song in ESC 2014. I like it more in english and I hope it wins.

I agree with you Robyn, song have Bond theme song felling, it reminds me on Bond song All time High from Octopyssy performed by Rita Coolidge.If she is in second semi final , she will better chance to be in final. But she is in ex soviet semi final with 7 countries from former Soviet Union.
For me better is italian version, but if San Marino want little chance to be in final from semi final 1 they must sing in english.

Italian version is better. but no Wow

This song is good, but it’s certainly not very strong. I doubt this will qualify, but it might be possible. There are 16 countries in semi-1 meaning this song needs to do better than 6 songs. This doing better than Latvia and Iceland is almost guaranteed. I think it’s also not unlikely to do better than Albania and The Netherlands. Montenegro has had the same fate as San Marino recently, so saying one has got a better chance than the other would be daft. Also, Russia isn’t exactly a popular country atm, meaning they may be booted out for political… Read more »

This seems to be not better than last year hence most probably a non-qualifier.

Both songs are available in Spotify as well. I’ve listened to both versions and I can say without a doubt that the Italian version sounds better!

“Maybe” this time the jury will actually give her the heavy voting boost she needs. …assuming that this one is actually the song they’re using.

Both versions are nice, but I’m not sure what Ralph Siegel was thinking with this composition. Her strongest genre is jazz – L’amore verra would’ve been a great choice, for instance (if it were eligible – but perhaps it is). The instrumental is also rather drowsy – they could jazz it up a little bit here, literally. It has a lot of potential to sound better.

Amazon have the mp3 album for pre-order, two of the five tracks (one English, one Italian) are “ESC Version”, so I think we can safely assume that this their entry this year.

I´m curious to it. These 30 seconds sound promising, though.

She’s definitely a courageous lady for just participating! Not sure about the song – from the 30 sec I can figure out that it’s maybe a 60s song? Does it really matter? Who hopes anymore that she’ll ever qualify? I agree with bloc voting, but it’s not only that.

I can’t stand the English version, but the Italian version is a little better. Hopefully the full versions will be better. I don’t think Valentina will be able to qualify due to bloc voting and not having an absolutely amazing song (no matter which version they choose) but if more countries from her semi continue to send bad songs she may have a chance.