Axel Hirsoux swept the board at Belgium Eurosong. With more than 50 percent of the televote and top marks from four of the seven international juries, he was the undisputed winner. His song ‘Mother’ really touched you.

And now he may be the busiest man headed to Eurovision. Axel has no manager, no record label and no press assistant. Since winning Eurosong he has had to answer all messages and interview requests on his own. But for Axel the stress is worth the strain. As he tells wiwibloggs.com: “I am proud that Belgium supports me.”

He’s on an emotional roller coaster, but Axel still found the time to speak with me recently about mothers, reactions from Flanders and Wallonia, and why he decided to enter Belgium Eurosong. Here are the highlights.

First of all, our congratulations on your victory in Belgium! How did you feel when they announced you as the winner?

I could not believe it. The votes of the jury were important for me, and when I saw the 12 points…it was amazing. And for the public votes,  I was stunned. I did not realize immediately that I became the Belgian candidate for Eurovision.

What do you think of the other songs headed to Copenhagen?

I must admit that I did not really listen to other songs yet. So far, I’ve heard Sweden, Austria, France, Italy and Spain. Obviously, when you make a contest  you always hope for the best. My goal is to take my country to the finale this year.

During the show, you stated that ‘Mother’ is for all the mothers, grandmothers and women in the world. How do you relate to the song?

“Mother” is for all people in the world. I think each one of us has a person who can be counted on and will always be there for us. “Mother” has a universal message and I hope that the public will receive this message in the Eurovision Song Contest.

What made you decide to enter Eurosong 2014?

A friend told me about the casting and told me that Belgium was looking for singers to Eurovision. At first I was afraid because I do not speak Dutch. And then I told myself that I had nothing to lose. So I embarked on the adventure. The first step was to send a cover. I proposed Loreen’s “Euphoria”. And for the first audition I sang ‘Tu te reconnaitras’ from Anne Marie David (Luxembourg 1973). After that I found myself in the semi-finals and after that, I was offered the song ‘Mother’. Then came the final and now I will go to Denmark. I have a beautiful story, and I hope it will not stop immediately.

You are representing Belgium in a year that VRT, the country’s Dutch broadcaster, organized the national final. In the semi-final you stated that you are, above all, ‘Belgian’. What have the reactions been like from both the Flemish and Walloon fans?

I am Belgian. The VRT is a Belgian television. I have no worries. But I confess, it’s not usual for a Francophone to be enrolled there, but I had nothing to lose. As for the Flanders side, I will always be grateful for the public who helped me to go to Denmark to represent Belgium. In Wallonia the public reacts very well too. I am proud that my country supports me.

I watch Eurovision ever since I was little. My favourite song of recent years is ‘Euphoria’ but I also liked the song ‘Only teardrops’ and Ukraine last year.

You’ve been compared to Albania’s 2012 contestant Rona Nishliu, who came fifth but was incredibly divisive. Are you flattered or offended by that?

I am not offended by that comparison, it’s really no problem for me. And if I have the chance to reach the final and finished with the same final ranking. I will win it all. You have entered several talent-competitions before, including The Voice Belgique and Star Academy. You have previously stated that you got rejected because, you “don’t have the looks of a popstar”. Was this ever an issue during Eurosong?

I think people’s attitudes are beginning to change and change. I arrived as I am, I accepted that I was….I’m fat, yes, and? I have no problems with my physique. Yes it will not please everyone but I think there’s room for everyone. A singer is primarily a voice. Yes the look is important, but I think my picture is not so bad.

You currently don’t have a manager, booking agency or PR agent. Recently, you said that you had been awake for more than 29 hours, answering messages, doing interviews, making appearances and so on. How are you holding up right now? Are you collecting a team around you for Copenhagen?

My best friend became my manager. The first days after my selection, it was absolutely crazy. But that’s part of the game. Now it’s quiet and I have time to rest. I have a team created around me and they do everything to make me feel good and make sure I arrive in Copenhagen in top form.

Thank you so much for speaking with us. Is there anything you would like to say to our readers on wiwibloggs.com?

Dream your life and live your dreams…

You can visit Axel’s official Facebook page by clicking here. 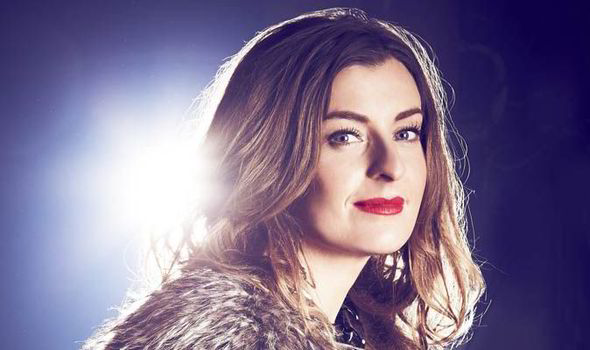 Compared to Rona Nishliu? Never heard that, and I am from Belgium… By the way, the comparison makes no sense, Axel is good, Rona performed the best Eurovision song in history. It’s almost insulting to see any song compared to “Suus” because it was so good no other Eurovision entry is likely to even come near in the forseeable future. But as for Axel. I thought he was the best finalist in the qualifiers. I would have sent One Day to the festival, they were special and very good, but sadly enough didn’t make it to the final of the… Read more »

Compared to Rona Nishliu? Never heard that, and I am from Belgium… By the way, the comparison makes no sense, Axel is good, Rona performed the best Eurovision song in history. It’s almost insulting to see any song compared to “Suus” because it was so good no other Eurovision entry is likely to even come near in the forseeable future. But as for Axel. I thought he was the best finalist in the qualifiers. I would have sent One Day to the festival, they were special and very good, but sadly enough didn’t make it to the final of the… Read more »

So he thinks and states that his physique will no please everybody … so he thinks that is the big issue around him … Good lord … have some mercy on me! The excuses people get to deny how awful a song is …

I’m so so so proud of my country this year… My Favourite at Eurosong was
‘Wild Side’ from Nelson, but oh dear Axel’s powerful ballad is wonderful !
I voted for him in our National Final and was so glad he made it.
I hope we’ll reach the final, pretty obvious with such a quality song like this…
Go Axel !

I support you too, and I am not even from Europe 🙂