Freaky Fortune and Riskykidd, the Greek representatives for the Eurovision Song Contest 2014, have published a new mix of their entry “Rise Up”. After getting us high with the Eurovision version of their song “Rise Up”, they’re mellowing us out with their “summer nostalgia” mix. It’s peaceful and soothing and I’m sure this acoustic version will help all y’all relax during the Easter holidays.

In other news, it has been announced that George Papadopoulos will oversee Greek choreography for the contest. For those who don’t know him, he is a young and talented dancer, who previously danced in two Greek Eurovision performances. He is also a close collaborator with Fokas Evaggelinos, the well-know director who “worked his magic” with Ukraine 2008, Azerbaijan 2013, and Greece 2005. He also directed Eurovision 2006 in Athens, Greece. He will also direct Russia’s Tolmachevy Sisters this year! 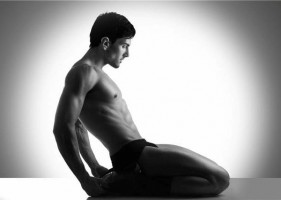 He danced with Sakis Rouvas back in 2009 in Moscow, during the “This Is Our Night“ performance. He is the guy on the right.

He had also danced in Baku’s Crystal Hall back in 2012, along with Eleftheria Eleftheriou and her “Aphrodisiac“. So… they’re going to… dance? … Eleftheria style? Because that would be interesting P:
Yeah I’m kidding.
I like the remix, it gives a completely different feeling to the song… but I prefer the Eurovision version.

Awesome remix!!!!! Europe will definitely Rise up on May 10th 😉 XX from Barcelona