Conchita Wurst’s acceptance speech at Eurovision was incredibly moving. “This is dedicated to all those people who believe in a peaceful future,” she said. “We are unstoppable.” It was enough to bring a drag queen to tears.

But even more priceless may be Conchita’s reactions in the green room—most of which viewers at home missed out on. While the cameras panned back to the presenters around Europe, Conchita and her team sat nervously in the green room hoping that their momentum wouldn’t stop.

The good folks at French web site parisgayzik.com were standing by the green room with their cameras pointed at Conchita, and they film her reactions from when Finland announced its points (Finland was the 28th country to reveal its results). At this point in the night, Austria was leading the Netherlands 190 points to 169, so it was still unclear whether Conchita would win. But by 9:45 in the video, Slovenia delivers its points and everything is confirmed.

Mark B, a wiwireader, kindly sent us this video along with some interesting commentary:

Whereas we see Sweden’s Sanna Nielsen cheering wildly for Austria, the two teams either side of Conchita (Armenia and Russia) are in no mood to congratulate the delegation right next to them. The exception is Rui Andrade, but then he is draped in the Portuguese flag, so we can hardly classify him as Russian. The Armenians in particular looked stony cold at Austria’s moment of victory. These pictures speak a thousand words.

The video footage above coincides with 31:55 in this video of the official broadcast. 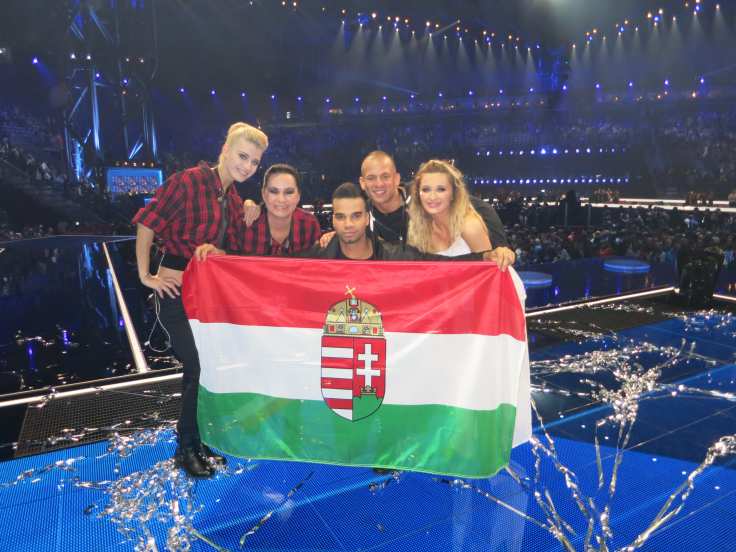 It’s very very strange that Conchita Wurst not have an album out! Soon it’s to late and he she’s forgotten and new stars born!
i’m always very suprised how artist can performed for 150 million people in Eurovision Song Contest and not release an album!

IT’s very very strange that Conchita Wurst not have an album out! Soon it’s to laye and je’s forgotten and new stars born!
i’m always very suprised how artist can performed for 150 million people in Eurovision Song Contest snd not release an album!

@ Robyn “At one point they were the favourite” The right way to put it was they spent an awful lot of money for two months heavily promoting themselves as the favourite. From the first day the song was presented they stormed to no.1 in the betting odds – how fishy is that? Not to mention being everywhere on ESC sites all the time. They were obviously spending large sums of money to place bets and buy publicity. In Greece where I live, Armenia’s was the only song that had large exposure before the contest. Popular television shows were busy… Read more »

You are perfectly right Robyn. If it hadn’t been for the graciousness of Sanna (who was also a big favourite), we probably wouldn’t have noticed the contrast with Armenia and Russia. It would be interesting to see the Netherlands reaction when Ukraine gave them no points, but they seemed pretty happy throughout.

@Nebi a better factor to determine if you’re a hater or not is: does it bother you? What I don’t hate doesn’t bother me, just saying.

Oh dear Nebi, you bleat about hate and then make some hateful comments yourself. What an interesting theory of yours that “straight” people were intimidated when they televoted in their hundreds of thousands. Did Conchita’s supporters go door-to-door in St Petersburg, threatening to apply mascara ?

Geez, how much celebration is now required to avoid being called a “hater”. The gay fascist patrol is truly getting out of hand. It was a third rate song that would not have won on a radio broadcast but we are all supposed be personally fulfilled by this victory. Here’s the truth, the gay fans here are delusional of how much genuine public support they have. The straight supporters are either intimidated, trying to look PC or just lying.

I think Sanna’s reaction is specially remarkable because she was close to winning, and instead of getting frustrated the second she realized she wasn’t going to, she stood up and cheered for Conchita who won over her. Now THAT is being a good sport. About Armenia and Russia; yes, not jumping and shouting and celebrating Conchita doesn’t necessarily means they hate her, it’s a natural reaction when you realize you didn’t win, but again,it’s interesting to see the contrast between them and other delegations and given the stance of these countries regarding LGBT and Conchita herself, it’s just obvious people… Read more »

Seeing Conchita cry for joy was just lovely and not annoying at all. We all cried with her. She deserved to hin. I’m happy Aram got what he deserved, by the way. We’re unstoppable!

Calm down Pixy, I fail to see why you’re in such high dudgeon. Losers should congratulate winners. It’s called being a good sport. Why not concentrate on Armenia and Russia ? They were the ones in the adjacent seats and should have been first with their greetings.

@Woz The Spanish announcer will probably be diagnosed with Alzhiemer’s next year. Who forgets that they forgot to announce the points. “Our eight points go to…………, Our ten points…”. LMFAOOO. And her accent, she sounded like someone you’d find in a meat market. Yes, she deserves to be fired.

Its a competition you idiots. Sanna was an exception. Every other delegation looked exactly like the russian or armenian ones. Why do these retarded queers concentrate their attention on Russia and Armenia all the time!? Enough already.

Leon, I think we do see Valentina and Ruth congratulating, as well as Sanna. if someone sat right next to you has won something big, it’s polite to give them congratulations. The other delegations weren’t sat next to Austria. You would have thought that Aram mp3 in particular would have at least said well done, especially in view of his earlier “jokes” and “misquotes” about the winner.

The guy on HER left, sorry

The guy on her right needs some make up too.

(Btw, I’m spanish, and our spokeperson needs to be fired. But she won’t. Why? Coz this is Spain. Expect her back next year to embarras us again)

I actually thought she was kinda faking her emotions in front of cameras. But now I can see how genuine they were. Congs again Conchita, you deserved it.
BTW, the guy from the Austrian tv really pissed me off during the press conference. He didn’t shut up for a second, then he went to hug every single person in the hall. I get his excitement, but he’s not the winner.

I don’t think any of the other delegations were largely congratulating Austria so I don’t see why Armenia and Russia were obligated to.