The Museum in Horn (located in Lower Austria) has gained notoriety since Conchita Wurst’s win in Copenhagen. Why? Because they are displaying a rare statue of Saint Wilgefortis, a Catholic saint who was also a bearded lady. Despite being relatively obscure, she is listed in the standard Catholic list of saints and has her own feast day. She is also known as Liberata or Kummernis. 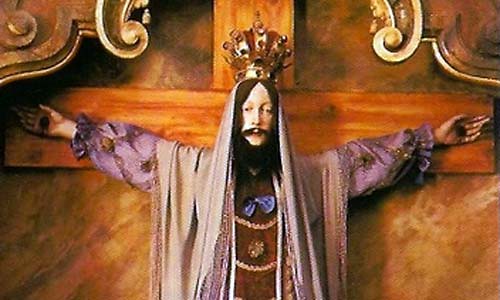 Saint Wilgefortis, a princess, took a virginity pledge after her conversion to Christianity. When her father tried to marry her off to the Sicilian king, she refused and grew a beard in protest. Since no king wants to marry a bearded woman, the marriage was cancelled. In anger, her father had her crucified.

Apparently, growing beards has been and still is a form of protest. Just as Saint Wilgefortis protested against marriage and the liberation of women, Conchita takes a swipe at gender roles, and shows the world that a woman can totally rock a beard!

In response to the Austrian victory, the exhibition has been given a makeover with information and pictures about Conchita. It has been reported that Austrian tourism has grown 165% since the Eurovision final.

Ruth Lorenzo: I want to return to Eurovision by 2017 @ sopon – Shame on me! I read nd even commented on the one about the day jobs, but I never noticed it was you that wrote it.
#undomybad 😉

Thank you! I am glad to say I am officially on Team Wiwi now! And no, don’t worry, you haven’t missed much. I’ve only written three other posts: the day jobs yesterday, András’ nagyanya today, and the Dutch JESC contestants. Another awesome one coming tomorrow!

@Timselvision Thank you! I’m very excited to see them back because Cyprus was in my top 5 in 2012 & 2013! Hopefully they can continue that trend 🙂

Hey, SOPON, congrats on being featured here!! (or maybe you’d already written and posted and I am just that dumb?)

I read that Cyprus is returning for the next contest! Does anyone know if this is 100% confirmed?

Not forgotten but not known further as artist!

The comments and interest for Conchita is now not so many as they were after she won.If she not come with more music she’s soon forgotten

What about the song, people? I thought the song won, not the person? 😉

@Dhani – the floods were sent to the Balkans not because of Conchita, but because there are many bigots like you there. It’s your hatred for people not identical to you that caused those deaths.

So @Dhani, you need to apologize for those deaths!

apologize for what you did to the balkan regions, concita!

I feel like Conchita has been too much capitalized. It’s probably not very pleasing for her to be used as a way of making money.