Her shock exit in the second semi-final couldn’t cool Mei Finegold’s heat. Instead, our favorite Israeli rocker girl has been on fire, releasing a stream of songs for both Tel Aviv Pride and with her band, Limouzina Express. They recently covered an Israeli hit from the 80’s called Seder Yom (Daily Routine). Originally sung by the late Yossi Elephant, this song completely fits Mei’s style. Take a look below.

With stunning vocals by Mei and Yuval Banay, the rock song is full of energy. The verses are a tribute to The White Stripes, while on the other hand, the choruses are in the style of Pink Floyd. It’s old-school, yes, but the instruments and the gravelly-sung notes reach out to people of all ages. Mei isn’t afraid to belt it out, nor show some moves onstage while having fun with her fellow musicians, and we like that. Music isn’t just a business, its a pastime and hobby to have fun with (especially with friends), and Mei shows us that. Ani ohev! 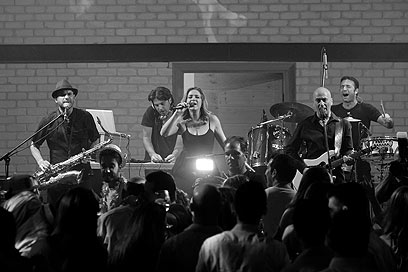 Sometimes when you say
What an amazing color
Typical, getting closer from the end
Sneaking, turning around
Sitting in the right direction Molly covers Dolly Parton ahead of the Glastonbury Festival

I like it a lot!
BTW the guy singing with her looks like Nikolaj Koppel, this year’s host.

It feels like for me, her placing in the second semi finals don’t matter anymore as she gets more publicity and fame as time goes by. And compared to some other performers who qualified, Mei got all her surprising success in some parts of Europe and of course in her home country.