Switzerland may have been eliminated from the FIFA World Cup, but they have scored a victory with Sebalter, as his Eurovision 2014 entry “Hunter of Stars” has won Canadian broadcaster CBC’s World Cup of Music.

Staged as a knock-out tournament, each nation competing in Brazil was assigned the best new song from an artist of that country. The whistling Swiss lawyer was up against some stiff competition, with Pharrell Williams representing the USA, Iggy Azalea turning out for her home country Australia and Shakira shimmying for Colombia. It was then up to website visitors to vote for their favourites as the tournament progressed. 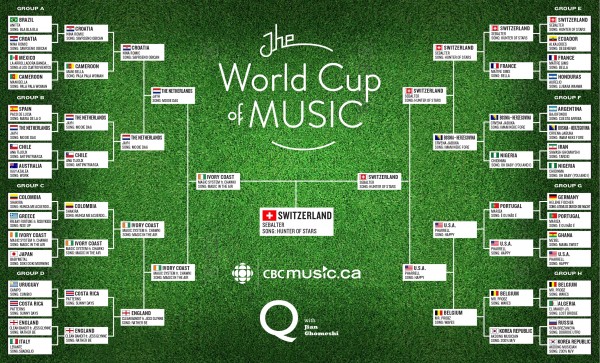 After beating Pharrell’s “Happy” in the semi-final, Sebalter was then up against Ivory Coast artists Magic System feat. Chawki with their song “Magic in the Air”. But it was Switzerland who triumphed with this well deserved victory.

Our only demand is that the city of Lugano throw a ticker tape parade in Sebalter’s honour! Malta: November National Final To Get The Drop On Competition Katrina on Eurovision: It’s Not Ever Really Only About The Music As a Canadian fan of Sebalter, I’m so happy to hear all these great comments because his song is just one of those that makes you feel so good. I hope one day he can tour my amazing country!

Awesome! Glad Sebalter’s getting some recognition in Canada. Plus, with the Eurovision tags in the video, cbcmusic may have just produced a few more Eurovision fans 🙂

That’s some amazing news! Thanks for sharing 🙂

Yesss! So proud of my big brother!

Greece and their Eurovision Song 2014 lost in the early round!