Today the European Commission and Eurosonic Noorderslag revealed that The Common Linnets, the 2014 Eurovision runner-ups, have been named one of the ten winners of the 2015 European Border Breakers Awards (EBBA). We’re glad the folks in Brussels appreciate good music! The European Commission founded the EBBA Awards in 2004 to celebrate the best pop, rock and dance acts in Europe. The annual awards ceremony will take place at festival Noorderslag (where the line up includes Softengine) in Groningen, The Netherlands on January 15, 2015. Partners of the EBBA awards are the European Talent Exchange Program (ETEP) and our beloved European Broadcasting Union (EBU) which solicited votes at their radio stations in different countries. The ten artists will now compete for the Public Choice Award which is based on the votes cast on the EBBA website. The voting takes place between October 21th and December 19th, and we will make sure there is a link on our website where you can vote for The Common Linnets (or someone else)!

The Common Linnets made their appearance at the 59th Eurovision SongContest last May in Copenhagen. They finished second which nobody would have believed just a few weeks before the contest. After the contest Ilse and Waylon split, but Ilse decided the Common Linnets weren’t finished yet and she started making new music with different country artists both from Europe and the United States. All Hail! Conchita Wurst wins Moment of the Year from Attitude 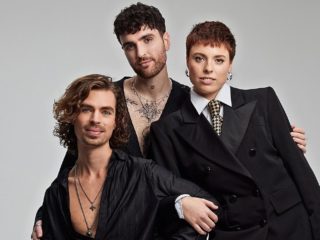 Oh my god this is huge. To be with names such Mo, Todd Terje, and John Newman clearly it’s a big deal, they are very talented. Wow, and those names that I have mentioned seem pretty cool to be in Eurovision as well..

They totally deserved this. I’m glad people outside of the Netherlands can really appreciate their music, because Dutch radio rarely plays their music anymore these days and it’s seriously pissing me off.