The choice of three female hosts – dubbed “Frauenpower” – is a first for the Eurovision Song Contest. Although Petra Mede hosted solo in 2014, there’s never been a multiple all female host lineup before. Get to know them a little better below:

Born in Innsbruck in 1979, Alice Tumler is truly international: she’s the daughter of a French mother and an Austrian father with Italian-Slovene roots. At 19 she moved to London where she studied journalism, media and sociology. After theatre roles in Paris she worked for French TV channels “Voyage” and “TraceTV“. In 2010 she took part in the popular French show “Thalassa” and became pretty famous in France. Austria doesn’t like to lose talented people, so ORF decided to give her Doris Golpashin’s job as the host of the show “Die Große Chance” together with Andi Knoll when Doris got pregnant. Alice speaks four languages fluently and, in our opinion, she is the perfect host for a show like Eurovision! Born in 1981 in Innsbruck, her first job was at the radio broadcaster “Antenne Tirol”. After serving as the “BRAVO girl” in 2000, Mirjam held a series of little jobs at “Tirol TV“, “MTV Germany” and “ZDF“. In 2005 she hosted the National Final for Austria and “Dancing stars” together with Alfons Haider. In 2006 she went to Germany to co-host the German version of “Dancing on Ice”. Later she hosted the “Life Ball“, the “Kiddy Contest” and the “Romy Awards“. Mirjam also gained popularity through the many movies she appeared in and her theatre role in “Manche mögens heiß“. From 2011 until 2013, she co-hosted the broadcast of the “Wiener Opernball” along with Alfons Haider and Arabella Kiesbauer, and the “Life Ball”. She’s hosted “Dancing Stars” for the past year. This lady has made a name for herself in a short period of time, and we think she will keep the momentum going by hosting Eurovision! Arabella Kiesbauer meanwhile came 5th in our poll of hosts you’d like to see at Eurovision – so it seems ORF have listened to the people! From 1994-2004 she hosted her own daily talkshow and has been a frequent fixture of German and Austrian broadcasting ever since. Her biggest claim to fame since 2006 is presenting reality competition Starmania.

The faces of the hosts are announced…

Just wait and prepare for an amazing show in May!

And what about Conchita?

ORF haven’t forgotten Conchita Wurst either. She’ll be hosting the Green room but let’s hope she avoids the pitfalls of Eric Saade…

Do you think ORF did the right thing choosing these faces to host your favourite tv-show? Leave your comment below!

Conchita brought the Contest to Austria with her winning song ‘Rise Like A Phoenix’: 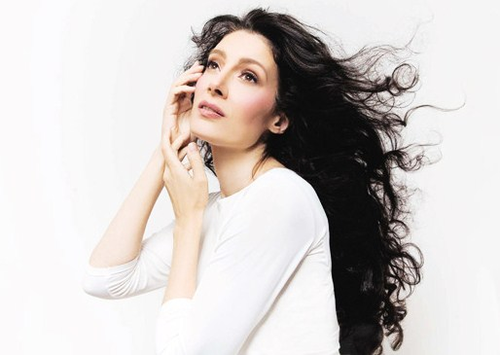 @Me…Lucy, well it is a “cheap freak show”, except it isn’t actually “cheap” anymore. These past contest proved that it can cost no less than 10 million euros minimum.

Just for everyone’s knowlegde. Conchita will be the music on Graham Norton Show (UK ESC commentator) when it comes back after xmas.

“I’m a woman, hear me ROAR…” seems to be the theme for 2015, women empowerment, the power of womanhood…maybe a remake of Charlie’s Angels (with Concharlita starring as Miss Bossy Boots)

I love and respect Conchita,don’t get me wrong,but I think her hosting the Green room isn’t a good idea. 2014 was her year but now we go on if you know what I mean. I repeat,I love Concita,I’m just afraid of eurovision’s reputation,that’s all. Some people are stupid and have a bad opinion about the contest because of people like her. And don’t forget the newspapers…I honestly get sick when they write about eurovision as if it’s some cheap freak show.

I think four womens host Eurovision isn’t good. I would prefer one men and one woman! But its not my choice! I like the host(s) from 2011 and 2013.

I like this combination, but I think thar there is too many hosts. I prefer less hosts. I liked Malmö. One host we all can remember the name of, Petre meade, and a cameo from a well know act to do the final green room. I’m sure it will be great like Düsseldorf was in terms of presenting. But I wont remember their names six months after the contest. After Copenhagen I can remember Lise’s first name and that’s it. I can’t remeber any of the names from Germany, even when the bloke is a big-ish name in ESC. @Robyn.… Read more »

I get the impression that if Sanna Nielsen for Sweden instead that Sarah Dawn Finer, Gina Dirawi and Helena Bergstrom would be the hosts for ESC 2015 in Stockholm or if Denmark won again, it would’ve been Lise (again), Louise and Sofie (Or 3 male hosts, Nikolaj, Pilou and Jacob Riising).

I’m excited for this, as it is super rare to have 3 female hosts.

I always though there are not enough hosts at ESC, because green room is almost a job for two, also the scoreboard, and of course the actual hosting.

So, I think these 4 working queens will keep it going.

No! I HATE Conchita!

I’m curious about their English pronounciation. Austrians just have such a charming accent! 😀 also yay for Arabella!

As Calvin wrote, in the essence of Too Many Cooks…Too Many Hosts! haha! I’m sure they’ll do fine.

FOUR hosts?!? I look forward to Conchita’s surprise performance of “Too Many Cooks.”

3 female hosts is a little annoying, but good selection BUT NO CONCHITA WURST!

3 female hosts? Boredom x 3. Alice looks very lovely though. If you ask me,I would bring back Danish lads. Pilou and Nikolaj were interesting to both listen and watch.

It is a stretch to think the wiwibloggs poll had any influence on these choices. If it did, Conchita would be hosting. I’m sure ORF know what they want. It is good to see the poll got one right, even if it was fifth place.
Conchita is perfect for the green room.

I think the hosts is good!

I like the hosts, but I still think Kati got snubbed. I guess she’ll be giving the Austrian votes again.

Yeah, great female combo! I was expecting Rosanna Pansino in the host line-up before this combo was even revealed. But never mind. I like this female combo, has never been in Eurovision history before! =D

I’m happy for those girls, especially for Arabella. She helped Tom a lot back in the days to feel comfortable with himself in her Starmania show.