With just a few days left until the grand final of Cyprus’ Eurovision Song Project, the six finalists are busy perfecting their stage shows and vocals. Fortunately Nearchos Evangelou and Charis Savva always have time for their fans. They recently got cozy with our Greek correspondent Billy to dish on their song “Deila Den Agapo”!

Cypriots will recognize you from your past work, but our other readers may not. Can you tell us a bit more about yourselves?

Nearchos: In 2008 I won the first prize in the Cypriot young songwriting competition “Lions”, and the year after third prize. Also, we won first place of the international competition “Grand Prix” which took place at St. Petersburg in 2009, with the choir “Epilogi” (Choice). In 2010 I participated at MEGA’s show “Get On Stage”, where I won the second place in singing. Next, I competed at four different musical theatres, where I was given the chance to collaborate with many artists and professionals. Right now, I find myself at the second year of my music studies in the United Kingdom.

Charis: In 2008 I represented Cyprus at the Junior Eurovision Song Contest with the song “Gioupi Gia!” as a duet. In addition, in 2009 I took part at MEGA’s first talent show for ages from 10 till 18 years old. I proceeded to the top-15 and managed to reach the semi.

Nearchos, please tell us about your new song “Dinami” (Power).

My new single was created for the new campaign of the Association for the Prevention and Handling of Violence in the Family about Bullying and Healthy Relationships. The song is composed by Andreas Anastasiou and Nalle Ahlstedt and written by Stavros Stavrou. “Dinami” is also available on iTunes. It talks about the real power, the one we all hide inside us, and is supposed to wake the young people up, emitting the message that in hard times, people must seek the help of their friends.

How did you decide to compete with an entry which also includes French?

Our song includes both Greek and French. Our mission is to touch people’s hearts. It’s a powerful ballad with outbursts which can be fairly presented on Vienna’s stage. French, just like Greek, is the language of love and can really bring out the feelings of pain passion that the song emits. I do not believe this can be counted as a disadvantage, but in all cases, I am very ambitious about “Deila Den Agapo”. We shall have more chances with a foreign language, as Eurovision is a European competition. And what should we know about your competing song “Deila Den Agapo”?

The music and lyrics are written by me, and Dimos Beke is the productor. I wrote the song at a very difficult moment of my life, trying to express my feelings and thoughts on the paper. The song describes the emotions one can feel after a disappointment. I created the structure in order that anyone can see himself in the song, relating himself to the emotions and messages of the song.

At the moment you’re considered a favourite to win. What do you make of that?

Nearchos: I do not know if we are thought to be the favourite and neither do we feel it. We only talk on the stage, with our own voices and our hearts’ voices. The honesty our song transmits depicts us and our thoughts. We are and will be real and not-at-all snobbish. We do believe in our entry, and hope we reach the final and touch your hearts. I do not know if we will be the winners but one thing is sure: If we win, we will fight with strength and soul.

Charis: We believe our song is very powerful. We really hope to win the Cypriot national final, and be sure that we give our best in order to manage to represent the country at the Eurovision.

Nearchos: Firstly, it was honorable to meet and collaborate with all the jurors. Their thoughts were right and helped us improve our performance. I admit we had a perfect relationship with each one of the judges.

Charis: All of them were positive towards us, and we received very good critics on us and our song.

Do you agree with the selection progress of the Eurovision Song Project?

Charis: The Eurovision Song Project gives the contestants the chance to show their talents, mainly through singing, and not, challenges. 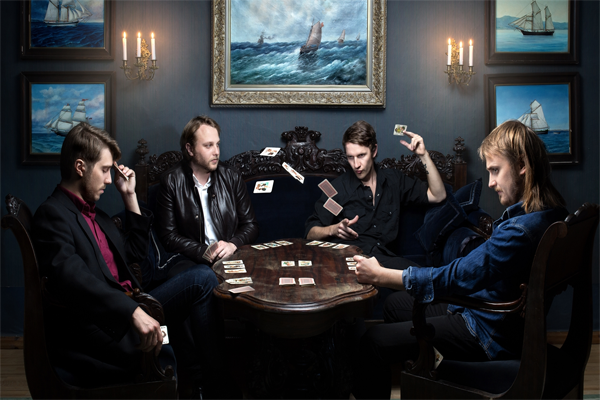 Elephants From Neptune Interview: If you believe in what you do, there’s no way you can go wrong