Earlier today, the Wiwi Jury — our in-house team of music unprofessionals — continued their trip through Latvia ahead of LTV’s national selection process “Supernova”, which kicks off on February 1. This time we visited the beautiful Palace Rundale, where we walked through the green gardens and tried not to break any national heirlooms. Then we reviewed the next four competing songs from Linda Kaukule, Katrina Bindere, Atis Ievins and Ornella Rudevich. Were the songs as gorgeous as the palace? Or a royal disappintment? Read on to find out…

Linda Kaukule – Save our Love

Anthony: This entry is very much cast in the same mould as Hungary’s 2013 Eurovision entry “Kedvesem”. Both are middle-of-the-road songs with uplifting melodies. First reaction? Unconvincing. But the more I listen to “Save Our Love”, the more it wins me over.

Deban: Easy-listening nostalgic pop that has a few sad, but contemporary undertones. Well sung, and relatively easy to perform vocally. “Save Our Love” successfully captures a mood that most people can relate to. Music lovers will find a sing along vibe embedded in this song. It’s not overstated, but it’s there.

Judit: In the first season of A Dal there was a similar song called “Learning To Let Go”. Somehow that comes to my mind. It’s not a complicated song, and that simplicity is why it’s so lovely and gets stuck in your head.

Patrick: Interesting how some songs remind you of something, even if you never heard them before. Linda is a beauty and her voice is lovely and pleasant. “Save our love” is the typical ballad-pop song we see every year in the NF’s and mostly they do miserably. But anyways, I like it!

Robyn: I’m intrigued by this song. Sometimes it sounds like a pop song from the late ’90s, other times it sounds a lot more modern. There are country flourishes and lots of energy and polish. It has a lot going for it, but there’s just something missing with the total package.

Sopon: Latvia’s Taylor Swift!! This is very country pop and saturated with the same clichés, but a pleasant listen. Similar to Taylor before she went completely pop.

Zach: Definitely a more ‘feel good” kind of song, harmless really, but fun to listen to. She does give off a pre-pop Taylor Swift vibe, and I really like the guitar. If she stages this right and her vocals are on point, she could have a shot I think!

Katrina Bindere – Run to you

Anthony: The first ten seconds of “Run To You” suggest Ace Wilder pop. But then it wasn’t. Katrina’s raspy vocals and the chorus of the song are reminiscent of Tiffany’s late 80s classic “I Think We’re Alone Now”. And yes, it does sound a tad dated.

Deban: A good demo effort, but far from a finished product. Sounds like an established  bubblegum-pop act that’s trying to venture into “serious” music. However, things fall flat when it peaks outside the Top 40. Core fans have been abandoned, and no new ones were successfully courted. The only “run” that listeners are doing is *running away*.

Judit: Sounds like a sketch. I don’t think Latvia would send something like this. I can’t imagine how it will work on the stage, but don’t worry: we won’t see it in Vienna. This song wants too much, and delivers too little.

Patrick: This song is so lovely and sweet – I really like it! I’m a big fan of Katrina, I mean she is a stunning artist and just look at her. “Run to you” is simply a lovely song with great lyrics (even if they are cliché)! I’m not sure if she can win or how she would place at Eurovision, though.

Robyn: Weirdly enough, this song reminds me of the Vengaboys’ single “Kiss (When The Sun Don’t Shine)”. It’s like the song wants to be both a sweet ballad and a club banger, but manages to be neither. Maybe the Vengaboys should enter Supernova.

Sopon: I feel like I might be listening to the English cover of Kati Wolf’s “Hivjuk elô”, it’s so similar in the upbeat acoustic feeling. Sounds like the perfect soundtrack to a chick-flick/road trip movie, but with no real climax. I’m cruising on a boring, straight, flat road for three minutes.

Zach: I like this song! Her vocals are really unique, and blend with the music rather seamlessly. The beat is really infectious, and I found my head bopping along in places. I do wish there was a little more “oomph” somewhere in the song, it’s pretty “by the numbers” as it stands. Maybe in the live version she’ll throw in a booming long note somewhere. Definitely one I’m watching!

Anthony: I’m not really into this kind of metal rock I’m afraid, so unsurprisingly this song doesn’t really connect with me. “Catfish” feels like a watered down version of the band Slayer with the ‘glamour’, and I use the term loosely, of another rock group The Darkness. The daft song name won’t help either.

Deban: I pray night and day that entries like “Catfish” are uprooted at the national selection stage. No one needs to hear this on the big night.

Judit: I like good rock music, but this song is not my cup of tea. My first thought was the MTV series, Catfish, and I expected something good (yeah I know, no relation between them). It’s just a big disappointment and I wonder how it can even be in the field.

Patrick: Damn this is horrible. Like really, really bad…The name says it all. No words…just no.

Robyn: I’m going to assume this song is about internet catfishing, but the lyrics could also be about an actual catfish. And the frequent mentions of “smelly catfish” make me wonder if it’s paying tribute to Phoebe’s “Smelly Cat” song from Friends. It’s a silly glam rock extravaganza and every national final needs one act like this to liven things up.

Sopon: This is totally my type of music, and I love the sound. Hope there will be a few mullets in the stage performance. The only downside is that “Catfish” might be the most ridiculous title in the contest, and that’s a difficult feat!

Zach: Umm, I’m not quite sure how to react to this one. Not my cup of tea that’s for sure. It just kind of sounds like noise. Lots and lots of yelling and banging — it’s like children got into a giant kitchen and started banging things until a song popped out. Knowing Latvia, I’m deathly afraid they’ll pick this.

Anthony: “Angel” is indie pop with a soft rock chorus, which kicks in with explosive effect. It all blends very well. It’s surprisingly pleasant and a real breath of fresh air from Ornella. Now there’s just the small matter of Latvia’s questionable decision on whether they’d send this to Vienna.

Deban: Good song, but let’s not kid ourselves, this is a B-Side. Musically, the vocals sit on interesting instrumentals, and it concludes beautifully. However, the boring bits in the middle also stand out.

Judit: Sounds like an ending scene in a musical and I have to admit, I love it. I can’t say it’s perfect, but it’s a big surprise. I’m not sure it can win but it will be on my playlist for sure.

Patrick: Ornella is a dark-horse in the race! She has a strong voice, the song is well-composed and the lyrics are great. It’s a bit dramatic and sounds like a song from a musical. Although it’s a bit boring at times, it’s special and sweet. It’s just missing that oomphf.

Robyn: It all starts off so quietly, sounding like a jazzy pop number. But it builds. The chorus unleashes some rock guitars, then there’s a choir, some orchestra accompaniment and a big fat guitar solo. This song is completely nuts, but it just gives it everything and I admire that.

Sopon: Supernova has been lacking something big and dramatic, and this has solved all of my woes. Loving the buildup! Loving the power! And that guitar solo is to die for! I’m enthused for this one. It’s a strong contender.

Zach: It’s a song that builds, and unlike other entries that could’ve had a great payout but turn bland, this one delivers. Love the booming vocals and the awesome backing track. The second half of the song is where it finds all of its power, and the beginning could be tweaked a bit to match that power. Ornella’s vocals are really highlighted here, and the lyrics are nice as well. I’m hoping this does really well, but with Latvia you can never be too sure. 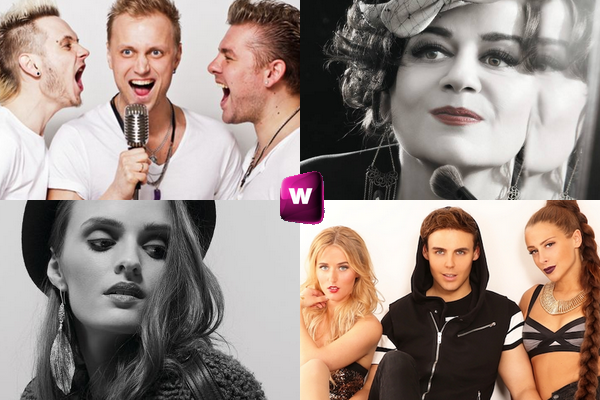 Wiwi Round Up: Lisa Angell, national selections in Norway, Iceland and Moldova Wiwi Jury Cyprus: Panagiotis Koufogiannis with “Without Your Love”

I rank the song like Nebi with Save Our Love as my fav.

I would have to agree with the jury here for the most part. My order would be Save our Love, Angel, Run to You then Catfish.