The Wiwi Jury — our in-house panel of musical unprofessionals — has been busy reviewing the first eight acts of the Moldovan selection O melodie pentru Europa (here and here). Time now to turn to the next four acts. Diana Brescan, Glam Girls, Serj Kuzenkoff and Valeria Pasa will face the unforgiving ears — and eyes, thanks to the live auditions broadcast by TRM — of our international panel.

9. Diana Brescan – Up and Down

David: There’s nothing special in “Up and Down”. She has a nice voice and the song is OK, but it needs to be more than OK for the final. And Diana’s vocal range is pretty limited, which doesn’t help.

Robyn: I love the ’80s power ballad instrumental styles, and Diana’s strong, clear voice suits the the song. I was going to declare this a guilty pleasure, but no – it’s just a pleasure, straight up. The most important thing when it comes to staging: this song requires big hair.

Anthony: The electric guitar parts in between seems to ring a bell for me, but I just can’t put my finger on where. Other than that, the rest of the song is simply gorgeous, very Carrie Underwood-esque. Diana’s no doubt beautifully talented and definitely has the vocals to match as well.

Kristin: I like this. Her voice is good, and I like the guitar riff in between. This is an extremely radio friendly song indeed, but in this case, I think it’s to her advantage. The song is growing on me like crazy, and I find myself humming it while doing the dishes.

Liam: This is mainstream radio, but mainstream radio is on the radio for a reason! Diana has a strong voice and can handle the song well, however I feel as though the guitar solos are unnecessary and by the end of the song are just boring.

Francheska: The opening is very Freddie Mercury meets mid-2000s pop. I actually like how Diana’s lyrics and voice are quite simple: the instrumentals stand out on their own and all she doesn’t need to have a screaming match! Overall, beautifully made, beautifully performed!

Patrick: She looks like she came out of the shower with too much shampoo on her hair. It’s such a noisy song and melody but her voice is sometimes nice, but just 20% of the song. Quite messy, with some good sides.

David: I really enjoyed this. Good song, good melody, well sung by the duo. And there’s personality in their voices that has you listening to it all the way through.

Robyn: Firstly and most importantly: this duo has a terrible name and they need to change it asap. But beyond that, the song is okay. It’s not the freshest sound and if the girls are going to perform as a duo, they need to work as a duo, not two solo singers. It’s not quite all there, but it seems promising.

Anthony: They may be known as the Glam Girls, but their live audition was far from glamourous. The whole performance lacked stage presence it was awkward to watch. And I’m not keen on their pop ballad “Magia” either. Safe, bland and one which clearly fails to make an instant impact.

Sami: It starts off nicely, but as soon as they start to sing I lose all interest. It’s quite dull, but at least the language sounds nice. It could’ve done well in ’90s, though.

Kristin: The chorus in this song is super annoying! But they’re good singers, although they don’t quite fit together. It’s a mediocre song and if they want to impress Europe, they’ll have to step it up a notch. Sorry Glam Girls, it’s a no from me.

Liam: I absolutely LOVE the piano! So the beginning of this song was really promising, and the Glam Girls did not fail to impress. I love that this is in a language other than English, and I love the backing vocals.

Francheska: This is dated, for lack of a better word. It’s mid-1990s, without anything modern or unique. If this were 1996, I would be more forgiving, but seriously, it’s 2015: get an upgrade. The cliche guitar riffs and boring drum beats will not get them far. That said, it’s interesting in a weird way. It’s kind of poetic, mysterious, and has a “je ne sais quoi” feeling behind it.

Patrick: Why are they dressed like ’90s Russian hookers? “Magia” is a nice song but it doesn’t appeal to me, as it is repetitive and again very noisy. The voices alone can’t save it.

David: An amazing voice. It’s a good song that gets better and better, but her voice is what makes it extraordinary. With some fine tuning and an understated staging, this could make top 10 in Vienna.

Robyn: This is like a rejected Whitney Houston ballad from the ’90s, sung by a less talented singer at a karaoke evening. Valeria’s voice can’t quite do what she wants it to do, instead sounding shouty and strained, more suited to rock than a soul ballad.

Anthony: Moldova’s most recent appearance at the Junior Eurovision Song Contest was in 2013, so I got a sense of déjà vu on this one. This sounds very reminiscent of “The Start”, and Valeria even sounds like Gaia Cauchi when she hits the higher notes during her live audition.

Sami: She sounds nice in the live performance, even though she is trying too much. I’ve heard this kind of song so many times before, and there’s nothing special in this one.

Kristin: There is a feeling in Valeria’s voice which appeals to me. A true power vocal, that sends shivers down my spine. The song is alright.  It sounds like something out of a Disney movie though. A very dark and depressing Disney movie at that, but it has potential. Could go places.

Liam: This song would be quite boring without Valeria’s powerhouse vocals. Fortunately they’re so good, they make up for everything else.

Francheska: Seriously, Moldova needs to upgrade its entries this year. Everything sounds like it belongs in the soundtrack for “Can’t Buy Me Love”. I love her voice, and she would be awesome with some dubstep or at least something that is from this century. However, her vocals cannot make up for this cheap song which belongs in the ‘Expired’ section of a grocery store.

Patrick: You can’t change your life, lady, since you already sent this to the competition. She has a stunning voice indeed but she is pressing it out all the time and it’s too much. The song is dull, we heard this already a itimes. It’s simply too big for her so this would not work in Vienna. You better try to change your life after the NF!

David: It’s uppbeat and it holds your interest throughout. With active staging that matches the song, this could be super catchy. You want to jump along with it.

Robyn: I like the cimbalom instrument, which takes the song away from generic Euro pop and gives it a Moldovan flourish. It’s jazzy number and Serj has a versatile voice, but the song is really repetitive and just gets boring. There’s not enough going on to hold my interest.

Anthony: Having heard Serj’s entry for the very first time, “Lautar 2.0” immediately springs to mind, mainly down to the eerily similar sounding trumpets on this lively entry. And just like Pasha Parfeny 2012 Eurovision entry, it’s one I can tolerate with the occasional listen once in a while.

Sami: Oh my god, this is a very weak song. Is he really a singer?! The song and his voice are both really annoying.

Kristin: Naughty Dan? Naughty Serj! It’s like Paolo Nutini and Justin Timberlake had a child together, and raised him in Moldova. I like! Upbeat, fun and catchy. And this mix between rock/pop and folk is near perfection.

Liam: Serj looks like the lead singer of MAGIC! (You know, that one-hit wonder band that sang “Rude”.) Hopefully he doesn’t follow the same path. As for the song, I don’t really fancy it. It could use massive improvements. If he does win, I hope major modifications are made.

Francheska: Well… It’s peppy. It’s clear that Serj has his passions for jazz and scatting, but unlike Basim’s act, it is not integrated with anything else. It’s simply passé, and I have serious concerns about the title. That said, it’s kind of catchy, and needs to grow on you. 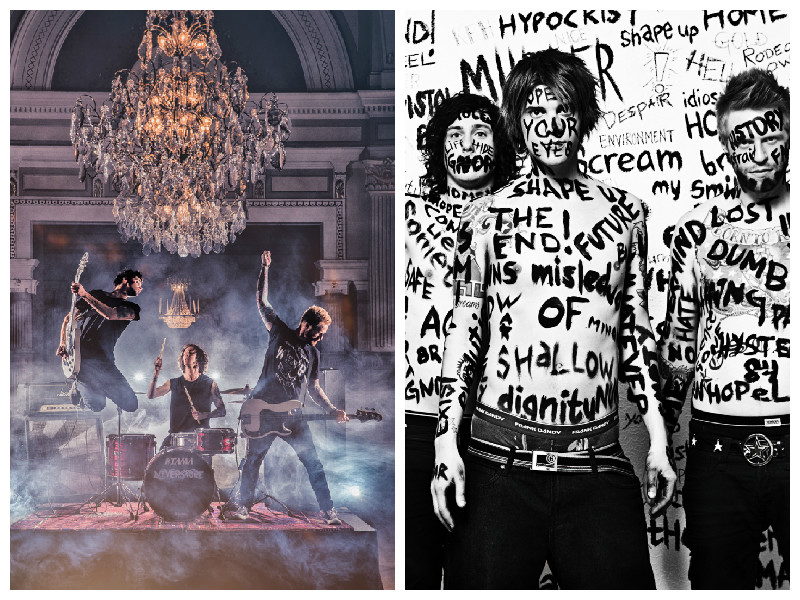 #melfest hopefuls Neverstore: “The song is very much made for an arena”