The Wiwi Jury – our in-house panel of music unprofessionals – has come to the final stop on its Irish Eurosong journey. Today, we take a listen to Erika Selin’s “Break Me Up”. She may be from chilly Sweden, but has she warmed us up? Read on to find out…

Denise: Aaaaaah I LOVE it! I have this song on repeat since the first time I heard it. It’s such a shame to hear that Ireland might not vote for her because she isn’t Irish. This girl is amazing, so I don’t care about her nationality. Let’s just hope that they won’t put dancers behind her because that was one of the reasons why Kasey and Ryan scored so low.

Angus: “Wake Me Up” by Avicii was annoying when it dominated the charts the first time and this cheap rip off borders on excruciating. Swedish production qualities make this more bearable than most of what’s on offer here but not much more. This makes me want to hit the stop button, not the dance floor.

Robyn: I wish there was some sort of Irish involvement with this song, because as it is, the non-Irish team behind this entry is giving viewers a good enough excuse to back a local instead. But this is a good pop song, Erika is a great singer and Ireland would not be doing a bad thing by sending this to Vienna.

William C: I love this so much! I like the mix of country pop a lot. Luckily the lyrics actually make sense and are upbeat. Out of the five in the selection, I think this would do the best at Eurovision. The only negative in terms of Eurosong is that she isn’t Irish. I don’t mind that, but many other people would. I hope they send this Swede to Austria! She will get my vote on the night.

Louis: Very catchy and makes me want more. Erika sure can sing but I imagine there needs to be a lot of choreography to go along with it to keep it in competition with the rest of Europe. Everyone loves a good key change and it’s a clear winner for me.

Mike: I am a sucker for songs which include whistling and I adore this so much. Erika has a lovely voice and the beat is amazing so I am gonna say it: Irelande douze points! With countries like Germany and Sweden voting in the second semi this would be a guarantee for the final. 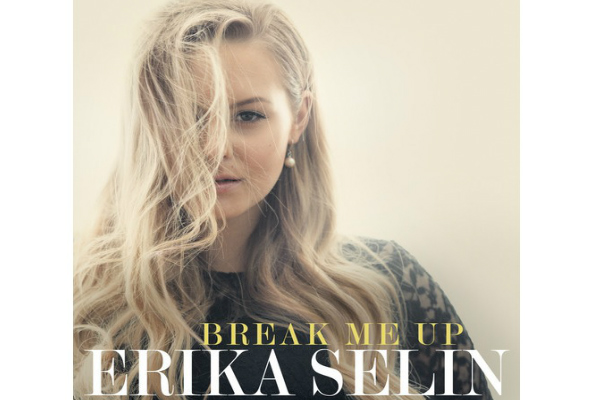 William: You can tell that Erika has a Swedish team behind her because this is absolutely amazing. Easily my favourite song in the selection, this is country music meets Avicii. The lyrics smack of empowerment and a woman in control, yet it will appeal to anyone who has ever felt on the margins. Erika, if you don’t win please participate in Melodifestivalen next year. Europe needs to know you.

Kristín: OK, the constant whistling started to annoy me after about 45 seconds, but all in all, this isn’t half bad. Its a solid pop song and Erika’s voice is nice to listen to. And isn’t she just cute as a button! I would definitely dance like nobody’s watching, if this comes on at Euroclub, despite the whistling.

Mikhail: This is a great song with an extremely catchy melody. I really enjoyed listening to it, but I feel that something else is needed to make it even better. It will be a great entry, but I fear that it may struggle with getting to the final.

Padraig: “Break Me Up” is practically pop perfection. The chorus, the whistles, Erika’s vocals… I LOVE IT! So what if she’s from Sweden? Irish artists of her calibre won’t touch Eurosong with a bargepole. Why should we settle for mediocrity when there’s someone this talented willing to be draped in the Irish tri-colour? People need to grow up, leave their prejudices aside and just enjoy the music. Spain: Edurne records the first part of her Eurovision postcard Poll: Who Should win Greece’s national selection for Eurovision?

Too many ballads being sent to Eurovision at the moment. Hope Ireland sends her because it can actually stand out and plus she’s gonna have brilliant backing vocalist!

What a bad, generic, forgettable, rip off pop song.
Sure Ireland pick a Melodifestivalen reject and see Sweden laughing.

Why are we even surprised?! 🙂

If she wins, I hope she makes a new video for the voters and juries to see.

@Jake to be honest the Irish media couldn’t giva a toss about Eurovision… RTÉ will bring the Irish collaboration to the song and all of Ireland will be behind Erika if she qualifies.

I think Irish people would be more inclined to vote for this because Erika WANTS to represent Ireland! There’s nothing like an outsider showing interest in your country. If this wins tomorrow, I’d be getting very excited for Ireland’s chances in Vienna.

I’m so pleased the jury agree with me, Ireland please please choose this for eurovision. It’s so well produced and catchy as hell and, like Denise, it’s been on repeat for me since it was released.

I for one think that this is a great song and would be quite happy as to see this in Vienna. But I really am not sure if Ireland, a loud and proud nation, will vote for this to get to Vienna. I think Nikki will make it to Vienna and I think rightfully so. At the moment.

I don’t want to sound nationalist, but I think an Irish singer (as in Irish national) should represent Ireland.

Does anyone know if this song has been controversial with Ireland press given how every aspect of it is Swedish? I don’t mind foreign composers entering other national finals, but this is just too much. Swedish composers, Swedish singer, Swedish producers, supposedly Swedish backing singers. I would understand if Erika had some roots in Ireland. Or if she had some sort of career there. Or if some Irish music executive was working with her. Or if the song had an Irish sound to it. It’s so egregious especially when RTE only chooses 5 songs to compete and Ireland has a… Read more »

I would be rooting for it if it was in the Melodifestivalen. But where is the Irland in the this irish entry?

Didn’t Sweden songs have not enought songs in esc?

Its my 2nd most liked song from the 5.. I might like *Memories* more but yep this is too shouty and all over the place indeed.. When i’m actually listening to Nikki’s song my body’s pressure gets high! 😛 Its like heavy metal hard rock 4 POP music! 😛 😛 I think that Nikki must was inspired by Natasha Bedingfield *Pocketful Of Sunshine* ! 😉 There’s Only **BUTTERFLY** !! <3 😀 I like the other 2 songs from the other lovely girls as well…Each one of these four has its own beauty and special uniqueness… 🙂 Whichever song wins of… Read more »

Unlike ‘Memories’ which is messy and shouty, ‘Break Me Up’ is catchy amd wonderfully produced, thanks to the Swedish team.