Eurovision’s Greatest Hits takes place in London on 31 March. The one-off concert will see a host of past Eurovision stars take to the stage to mark 60 years of the contest. While the show itself will be purely celebratory, we’ve decided to add a little competition to proceedings by ranking and reviewing all 19 Eurovision entries sung by the 15 confirmed acts. Today the Wiwi Jury — our in-house panel of musical unprofessionals — returns to Düsseldorf 2011, to witness one of the most disastrous Eurovision comebacks of all time, Dana International’s “Ding Dong”. The song began Israel’s recent non-qualifying streak, but has it improved with age? Read on to find out…

William: An ode to silent prayer and personal resolve, the song sets perseverance to a mid-tempo dance beat. Its clichéd message that hope springs eternal would normally leave me yawning. But channeled through Dana — an Israeli transgender diva who has journeyed from outcast to national treasure – that message takes on renewed depth and universality. “Ding Dong” becomes a solemn battle cry for those living on the margins of society.

Sopon: This is one song I would gladly block from my memory forever. Dana International must have had the mindset of “Oh, I won thirteen years ago, I don’t need to actually try“. She and her backing singers were wailing like dying cats, and the song was really poorly-written to begin with. Sorry Dana, this deserved what it got!

Angus: HATERS GO HOME. The fact ‘Ding Dong’ didn’t qualify still makes me sad to this day. The message is aspirational, unlike so many other Israeli songs Dana makes the Hebrew werk and homegirl owned the freakin’ runway.

Judit: Well, haters gonna hate, but for me, “Ding Dong” doesn’t deserve any more than what it got. “Diva” was THE BEST! If she really wanted to comeback with a bang, she needed a better song. I wasn’t surprised when she failed to qualify. The only thing  good in that performance was Dana.

Kristín: OK, I love Dana International as much as any other Euro-nerd, but “Ding Dong” is far from being her greatest work. I was immensely disappointed when I heard the song. I thought it was boring and predictable, and when on stage in Düsseldorf, I wanted to murder those backing singers and their God awful dance routine. And the basket dress didn’t help. I’m so sorry Dana, I love you girl, but ‘ll pass on the song.

Anthony: Trying to outdo her classic 1998 winning single “Diva” was always going to be a near impossible task for Dana International. At first, I wasn’t keen on the song but then it quickly grew on me, and eventually found its way into my 2011 favourite. Just as I feared back then, the Eurovision version of ‘second season syndrome’ which affects almost all returning artists, struck Dana with a vengance.

Mikhail: I like Dana. She’s a great performer, but “Ding Dong” doesn’t shine. Such a dull song doesn’t match such a glorious artist. I’m sure that, if she wanted, she would have made the final or even on the winner’s podium, but she ended up with “Ding Dong”.

James: A failed comeback, if you ask me, but we still love her. In 2011, Dana came back to the party and entertained us again with flair. You can’t blame her – it was superb. But the song was still meh and the entry was more about Dana and her personality than anything else. I don’t think it was at all about qualifying, but just having a ball and having another opportunity to strut on stage. And strut she did. 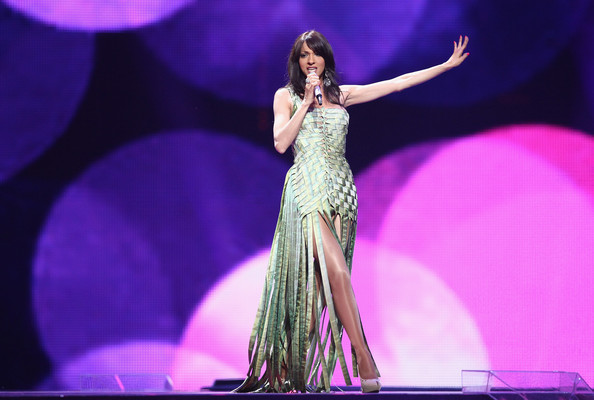 Padraig: As comebacks go this was pretty lacklustre. Whereas other 90s winners – Carola, Kavanagh, Perrelli – received mixed receptions, at least they tried to return with a bang. Dana arrived with a little pop and quickly sizzled out. She strutted like she owned the joint, dressed like she’d had a fight with a shredder, and sang like she was being strangled. Ding dong! The diva is dead!

All 18 members of our jury rate each song. However, we don’t have room to share written reviews from everyone. Here are the remaining nine scores. Slovenia: Maraaya unveils video for ‘Here For You’

Robin Stjernberg gives killer vocal on ‘Let Me Dance With You’

I not too sure what to say, all I can say is I understand some of the peoples feelings of a let down, I know it was at first for me also, but then I keep hearing it I absolutely feel in love, for over a year I was singing that song on and on, even when I met some israelis I said that was may favorite song and they said they liked it also. I will forever be a big fan of this song. my baby sister was only 4 and learned to sing the hebrew parts and its… Read more »

My friend and I were big fans of Ding Dong, but indeed Europe said no more. That’s fine, though – her songs in 1998 (performer, though not the best live vocals that year) and 2008 (songwriter) were both well-written ESC classics for me too. Remember also that 2011 was a very strong year for songs, and there were a lot of entries (19 in each semifinal!). That being said, I would’ve preferred Israel had made the final instead of Ukraine’s sand-art entry or Romania’s incredibly generic song. I also liked Ding Dong better than Denmark’s song, which sounded nice and… Read more »

Ramadan gave a rating of 1/10 to this “Zionist imbecile”. Ramadan, yes, you heard it. Ramadan, that is. Go figure.

I still remember when Dana had visited my country Greece 17 years ago when she had won in 1998 with *DIVA* and appeared on a night club in Athens..
People were pretty acceptive & friendly towards her altough the whole society & world were ages behind in racism towards transexuals like Dana or Conchita Wurst..

Her interval act in 1999 (performing Free) was a lot better than Ding Dong:
http://youtu.be/Iatm-XhZCEg

Guys, we’re reviewing all Eurovision songs performed by all the confirmed acts. Ding Dong is likely to be erased from history on the night, but that’s no reason not to look back at it now. 😉

I don’t think Dana’s performing ‘Ding Dong’ at the Greatest Hits–on the website, it just says that Johnny Logan and Dima Bilan will performing a medley of their two songs. They reviewed Anne-Marie David’s ‘Je Suis L’Efant Soleil’ as well, and she’s not performing it: she’s just doing ‘Tu Te Reconnaitras’.

I am with you, William & Angus. I love Ding Dong. It is still in my ESC song mix & gets played regularly. Dana is ESC royalty.

Yeah *DIVA* was & is just on a special great league of its own and can not be compared at all with the wayyyy much inferior *Ding Dong*..

This song is okay on it own, but that performance is just so underwhelming. It only picked up when she walked the runway. It just needed a flashier performance in my opinion.

Davved, i dont agree your opinion i think she was better in the ESC than national final. In national final she sounds rough and she did a lot of mistakes but in ESC she decreased her some mistakes i think. Apart fromt this i really like Ding Dong. I was shocked when she didnt pass the semi finals. However, Diva was amazing and its hard to compare Ding Dong and Diva

Indeed Oostenrijk…Agree with you buddy on this one though..
*Ding Dong* was the high true definition of a FLOP 4 a song & Dana’s own standards..

Ok she had performed *DIVA* on Congratulations Party in Copenhagen back in 2005 so i can see why she chose a different song to sing in London 4 31st March.. I don’t really *Ding Dong* to be honest…Really fail & unfortunate comeback 4 her indeed…I don’t find it unfair like how many euro fans do claim because they love Dana that she was eliminated in the semifinal in Dusseldorf’s Vision.. At least she could had picked a new song to sing in the Diamond party that would be appealing to our ears instead of this mediocre meh song.. The song… Read more »

This song deserves to get reviewed in the “greatest flops” category, or the section should be called “random review on ESC songs”

Correct me if I’m wrong, but didn’t she write the Israeli entry in 2008? That one was great! “Ding Dong” was pretty standard in my opinion, but there were worse songs that year.

In my opinion its nothing wrong with the track itself.. it is catchy and uptempo.. but the performance did not enhance the song. it was lackluster. she should have party-ed it up much more.

Im not saying she would have won ESC but she could have made it to the final had she done a great stage performance.

As an Israeli fan, I was anticipating Dana’s return badly for years. Ding Dong was a HUGE let down which as a Dana fan I’d rather forget. Like Diva, Ding Dong did not represent Dana’s music whatsoever. But while Diva is a good song that was right for the time, Ding Dong was bland, dated and totally ruined Dana’s attempted comeback. I would have loved her with a dark, spicy tune like that for example: https://www.youtube.com/watch?v=NYk7O83uMos. THIS is Dana’s real music.

This piece of crap will be performed on the Greatest Hits show? WTF indeed…

actually it’s a pretty clever paraphrase. “Ding dong the witch is dead!”. Everybody knows that, and if you don’t – well then you are one of the few.

“The diva is dead”? It’s really unprofessional, inappropriate + stupid to have written something like that.