Is it already midnight?! Spain’s Eurovision 2015 singer Edurne has just unveiled her song ‘Soñar’ (Dream), which appears on the soundtrack for for the Spanish version of the Disney movie “Cinderella”. Naturally she’s turned into a fairytale princess for the occassion.

Edurne announced that she would be the Spanish voice for the Cinderella soundtrack shortly after being chosen to represent Spain in Vienna. We saw her turn into a tigress in the ‘Amanecer’ music video, but in Soñar, the Spanish beauty is the belle of the ball working the staircase of a grand castle. All hail!

Soñar showcases a diferent side of the Spanish pop star. Unlike in the “Amanecer” video, we can’t see the fiery Edurne who burns with desire waiting for her lover. This is the softer, more tender Edurne — and she fits into the role perfectly, with the glass slipper included!

Cinderella will be released in Spain this Friday, March 27. That’s almost one month after her release of ‘Amanecer’ and its epic Peter Jackson-like video. Edurne seems to love cinema… can this be a hint/idea for her performance in May?

Eurovision’s own Cenicienta (Cinderella in Spanish) will have to survive past midnight on the grand ball in Vienna on May 23 if she wants to be crowned princess of the Eurovision. Will Edurne achieve her goal or will she return home as an ash-faced servant? Only time will tell… Meanwhile, which face of Edurne do you prefer? Hungary: Boggie reacts to Israeli objections to “Wars For Nothing” 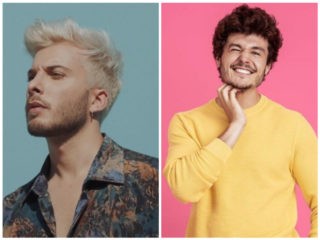 I preffer the voice from Amanecer but the face of Edurne from Sonar is more beautiful. She looks kind and loving.

i prefer Edurne with Amanecer than singing this type of songs, but it’s nice. and so random, but is it just me or she kinda looks like Valentina Monetta in that screenshot picture? 😀

Maja and Daniel: haters are gonna hate. I hope you are happy hating. But please, let us have fun with Amanecer and go hating somewhere else. Thank you. We don’t care about your hating. Dixi.

@Mario What? People can’t have opinions? It just feels….bland. It is not great listening to and the video made it even worse. I am more disappointed with Spain than the UK because we all knew the British one wouldn’t be great. And thanks Maja!

Guest
Mario My Vision of Gay Love ~ No One Can Take Your G re A t Y *DREAM* Away!

To hate or dislike *Amanecer* is just out of the question here… Even if you might not really like it or love it but you just can’t go & say that this song is truly bad and deserves to get disliked or even hated by anyone…This is pure exaggeration.. The song might not be really fantastic but still is good enough…It IS descent and no one can deny this fact.. With the right staging *Amanecer* can live its Cinderella transformation and transform to a winning song..! <3 Personally i prefer all the way Spain to get the victory than the… Read more »

Spain’s song is very good… 🙂 We might got disappointed and we did not hear a fantastic winning song but still… *Amanecer* is very descent song and 4 Espana’s standards is top.. <3 🙂 Currently i have Espana 10th on my top40! 🙂 I have the 2 hot favorites for the victory that are Italy 22th & Estonia below Spain 4 the record.. 🙂 Edurne with that song can go really high..! Top 10 or top5! She has chances even to win and i do not mark Espana off from the race 4 of win.. Spain is one of the… Read more »

I hope Spain wins this year! They deserve it. They have a very good singer and very good song. Spain 2016!!!

Daniel,Im with you,I hate her song

I am probably the only one who hates her song (Amanecer).

BEAUTIFULL AND TALENT, OH MY GOD IN MEXICO WE WATCH THAT MOVIE LAST WEEK, NOT STEEL IN SPAIN.