Eurovision’s Greatest Hits takes place in London on 31 March. The one-off concert will see a host of past Eurovision stars take to the stage to mark 60 years of the contest. While the show itself will be purely celebratory, we’ve decided to add a little competition to proceedings by ranking and reviewing all 19 Eurovision entries sung by the 15 confirmed acts. Today the Wiwi Jury — our in-house panel of musical unprofessionals — only have to turn their time machine dials back two years, to Malmö 2013. Denmark’s Emmelie De Forest charmed Europe with her woodland waif act and a hunky flautist. “Only Teardrops” proved to be a runaway winner, but does the magic endure today? Read on to find out…

Robyn: 2013 was one of those curious years with no obvious frontrunner. “Only Teardrops” is a good enough song, with an especially great melody, but it seems destined to be forgotten between “Euphoria” and “Rise Like a Phoenix”. It’s never a good sign when one of the most memorable bits of the performance is the dreamy pipe-playing guy.

Sopon: Emmelie’s song is like so many other Danish entries: sub-par and lazy. She’s one of the weakest winners from this century, and I still can’t understand how a song with such awful clichéd lyrics won the whole thing. Even though DR hosted a fabulous edition the next year, I’d have left Emmelie in the semis.

Josh: “Only Teardrops” was absolutely amazing at the time, and a clear favourite from the beginning. Listening back a couple of years later, it’s definitely lost its spark. Perhaps it’s because she’s sandwiched between Loreen and Conchita, but it’s all just a bit meh now.

Angus: Y’all haters need. to. go. “Only Teardrops” takes me back to mother nature and acts as a primal call of emotion. The message of a failing relationship is devastating, Emmelie hits us with H2T woodland sprite innocence and the flute player lures us in with his hypnotic siren call. This doesn’t leave me with tears, it leaves me with a warm feeling in my heart.

Ramadan: It was one of my favourites to win DMGP, and I was so happy that Emmelie represented Denmark at Eurovision. The melody is absouletly amazing and I just love the flute. I couldn’t stop listening to “Only Teardrops” before the contest, I think I heard it like over 1,000 times. Although I did think the live performance was average.

Denise: It’s an average song, but the flute, the bare feet and the rest of the staging make it a deserving winner – it still gets played on the radio in The Netherlands. Her voice wasn’t special, but it suited the song. I would’ve loved to see her return as a competitor with “Rainmaker”.

Liam: I thought Emmelie de Forest was a deserving winner in 2013, and looking back today, my opinion hasn’t changed. I admit that the live performance was shaky, but it didn’t take away from the masterpiece that this is.

Sami: 2013 was the first contest I saw live and I was so happy that Emmelie won. The song is very strong and Emmelie’s performance was amazing. She’s so lovely and sounded great on stage. Her work after Eurovision has been brilliant too, I love her debut album and new singles. Totally a deserved winner! 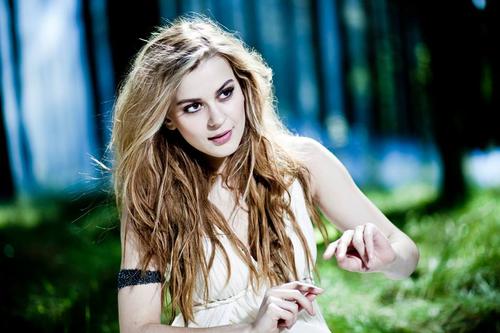 Mikhail: Emmelie was great. Her performance was incredible and the song itself has an amazing melody. It’s something special. Emmelie’s voice wasn’t the best, but it was good enough to capture everybody’s attention. As a whole it was all great! Oh, and the flute slays!

Padraig: It’d be so easy to poo-poo “Only Teardrops”, and write it off as a calculated effort designed solely to win. But then you’d have to ignore all its pluses, because let’s face it – the song is brilliant! I can never skip when it pops up on shuffle, and the urge to sing along is often near impossible to resist. The stage show was integral that night in Malmö, yet even without it, the song shines. I’ll always stand by Norway’s Margaret Berger, but this really was a wonderful winner. Poll: Which duo has the best song at Eurovision 2015? I voted for Italy in 2013. That being said, Denmark was a very deserved winner. Like “Euphoria” and “Satellite”, this was one of the songs that became big hits outside the ESC.

@mad-professor: No, it really isn’t. Weird things happen in the charts sometimes, like Molly Peterson Hammar hitting #1 on Swedish iTunes (above the second chance entrants, evidently) immediately after being 6th place in Melodifestivalen semifinal 1. Even if it were 1 week after the contest (which is accurate for Common Linnets vs. Conchita but I’m not sure it’s accurate about Loreen vs. Emmelie), would it really be embarrassing or rather a testament to how lasting of an impact Euphoria had in Europe? Either way, I don’t think it makes sense to focus on one thing like that and ignore Emmelie’s… Read more »

Oh i LOVE this song..! <3 When it won the Dansk Melodi Grand Prix i really thought myself that this was a winning song and could be absolute hot favorite to win the Vision of Malmo..! <3 It was really love at first sight 4 me with *Only Teardrops*! <3 Emmelie with Denmark truly deserved to get the victory! <3 To reply to another member's non true claims.. *Only Teardrops* did just great on european charts & radio..! It WAS indeed big hit after EuroVision! It is one of the few only rather successful winner songs of Euro Vision actually..!… Read more »

Incredibly overrated, but by no means bad. I do however think Rainmaker was an infinitely better song and should have competed in 2014.

My favourite winning song ever, I love her music <3

@Alex
It’s not embarrassing for the previous winner to re-enter the charts and chart higher than your song just 1 day after you won the contest?

I mean, at least Conchita was beaten in the charts by a song from the same year.

I hate it when people hate a song just because it´s popular. I mean, if it´s popular and winner-ish then you don´t have to dislike it XD

This song still gives me goosebumps, my close #2 after Norway that year 🙂 Love it!

@mad-professor: Embarrassing how? Euphoria is one of the most popular Eurovision songs of all time. It’s ludicrous to expect that every year’s winner would be as successful as Euphoria.

I preferred Norway and Italy myself, but Denmark was a good winner in its own right. More deserving than Conchita, at least.

“Only Teardrops” is a great song and a very worthy winner, you can only consider it a “failure” in comparison to previous winners “Euphoria” and “Fairytale”, but those are the two most succesful songs in Eurovision history, so it’s not really fair. If we look back at “Rise like Phoenix” in a couple of years, the situation will be much the same.
My favourite of 2013 was Anouk, her song was incredible and she delivered flawlessly. I liked Margaret aswell, but she was very underwhelming live. Emmelie was the rightful winner.

Sorry you guys but Denmark was the rightful winner of 2013.

That song and the staging just stood well and above higher than everyone else. That was the year that pretty much got everything right – the top 4 – Denmark, Azerbaijan, Ukraine, Norway – the clear 4 standouts of 2013.

And in the end the best one won, and that’s Emmilie 🙂

No song deserved it more in 2013. Maybe it will not be a legendary song when all is said and done, but she deserved her win. Norway deserved 2nd I think…..robbed by that Azerbaijaini glass cube…

I can see based on the score that she’s in the same league with Lordi 🙂
My winner was Margaret Berger and she was FAR away from Emmelie!

Emmelie is A M A Z I N G!!! She is a true and deserved winner! I love her so much! One of the best!!
From Greece

It is one of the few winners of ESC that I have heard on the radio both in my country and when I am abroad… that and Euphoria…..

Only Teardrops is wayyyyyy better than most of the winners in the new millenium. but Euphoria IS the best winner and happened just one year before. Rise like a phoenix has also had alot of media attention.

but calling it one of the worst winners is beyond bad taste..considering winners like russia,latvia and estonia for example.

I love it. I knew it would win. I would have rather seen Norway, Moldova, Germany, Russia, Israel etc… as the winner. However I wasn’t sad to see her win.

Norway and Netherlands were the best that year.

@Alex
It wasn’t really a hit – Euphoria charted higher than it in 2013, which was pretty embarrassing.

The worst thing was SVT allowing the use of confetti during the performance which should be reserved for the winning performance. It’s like they wanted to present it as the winner from the first semi-final.

I didn’t like this song in 2013, and I still don’t like it now… I think it was very overrated in 2013 and I’d much rather have a country like Ukraine or Norway win in 2013 instead

There were better options 2013:

Not sure if Denmark is good enough for my Top 10 of that year.

@Robyn: Really? Most people saw Denmark as the front-runner for quite some time. Certainly the bookies did, anyway.

@Alex: It actually was a hit after the contest. It charted pretty well.

I didn’t think this was a deserved winner until I saw the final performance, which was perfectly sung. I was rooting for Ukraine instead, but Emmelie definitely was a worthy victor (with a better song than Ukraine’s) in Malmo.

Margaret Berger with ‘I feed you my love’ (Norway) should have won – it was amazing.
However, Emmelie was great too and deserved the win – she was my third on the night.
Top 5 for 2013
1: Norway – Margaret Berger – I feed you my love
2: Germany – Cascada – Glorious
3: Denmark – Emmelie de Forrest – Only Teardrops
4: Moldova : Aliona Moon – O Mie
5: Ireland : Ryan Dolan – Only Love Survives

Emmelie is my favorite artist by miles. I absolutely love Only Teardrops and her other songs. (She is the only reason I am interested in esc, actually). I look forward to seeing her at the event. 😀

Lovely song but a winner?? It wasn’t a hit after the contest and Emmelie isn’t a big name even in her own country.

The live performance was strong but IMO it should have been in top 5 or top 3 and not in the first place.