Ann Sophie’s vocal was on point and tweaks to the performance gave ‘Black Smoke’ a real sassy soul on stage. The song has really grown and her confidence was impressive. People might have doubted at USFO but after this performance the doubters can go.

Ann Sophie was appearing at the Echo Awards, which recognise outstanding achievments in the music industry in Germany.

Ann Sophie also confirmed the forthcoming release of her debut album Silver Into Gold in a post to her official Facebook page:

Ann-Sophie was joined at the Echo Awards by a host of other German Eurovision stars, including 2010 Eurovision winner Lena Meyer-Landrut and 2014 contestants Elaiza, who presented the Best International Newcomer award to The Common Linnets. 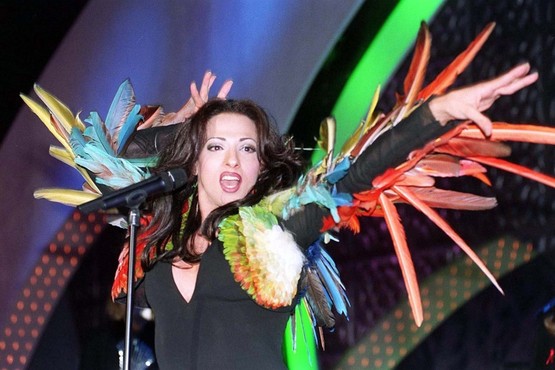 Greece: ERT will re-open in May, Eurovision participation unchanged

I think that she is being mistreated by the proud germans during and after this perfomance. They still cant fully support her because it was not their first choice. Her singing was flawless and lets face it, the camerawork at ESC and the fabulous stage in Vienna make the ECHO awards look like a amature show. This song will stand out on the final night as it is well written and different. If she nails her vocals and is supported by a great visual show she will do a top ten and that will be a lot better than the… Read more »

I love Ann Sophie & her song “Black Smoke”. It is in my Top 10.
I think this performance is an example of what not to do. Ann hardly moved. Were her feet nailed to the floor? The camera work was slow and did not provide any excitement.
The audience were asleep which did not help either. That won’t be the case in Vienna.

Thank you @Konstantin yes i would understand that the song isn’t your taste, but please dont insult the artist. She is a good singer…and saying this is one of the dark moments for Germany at ESC but i think No Angels Dissappear were pretty horrible. This is a great song In my opinion.

Oh, bitch, please! Ann Sophie is a unique artist with a very interesting voice. The song is amazing and definitely Germany’s best effort since Lena’s Satellite. I really hope she does well, so she can prove that she deserved to go to ESC. Her song and she definitely deserve it.

Who applauded her? People were not moving, only watching, without emotions, after performance they gave her very little applaus. And she feels it. Every other performance got bigger applaus. She can be happy, they didn’t boooooow her. She is karaoke singer, nothing more. Very bad for big music country Germany.

No applause? Are you guys expecting the audience to shriek their heads off? They still appluded her, and the song is not that terrible. Just because the winner didn’t want represent that she is a total witch. Just give her a break.

No applaus. Germans are still angry. She is hobby singer, not big artist. Germany will never accept her. She has a big courrage, that she wants to participate without any support. Crazy woman, crazy ARD. Btw her performance and song are really schwach.

is she ever going to release a music video for ‘Black Smoke’????

At Echo she got little applause.
USFÖ was not a competition, but only Universal against Universal against Universal. The Germans had no choice, everything was arranged. Imagine, the winning song would have been of Ralph Siegel. He would have changed the singer. But since everything comes from 1 label, the winner can be easily replaced – after the public 3 times has paid money for voting. The show was so embarrassing that no-one dares to complain.
The song is boring, the songtitle tasteless and refers to extermination gas.

Did anyone else catch on to some possible symbolism in the title? She was originally the runner-up in USFO but then became the winner. Silver into gold?