On Tuesday last, over 4,000 Euro-fans descended on the Eventim Apollo Arena in Hammersmith, London to celebrate Eurovision’s Greatest Hits – a special concert organised to mark the contest’s 60th anniversary. Several members of the wiwibloggs team were in attendance, and we can attest that it was a brilliant show. And y’all have the chance to see for yourselves, as the event will be broadcast across Europe over the coming days. Here’s everything you need to know. 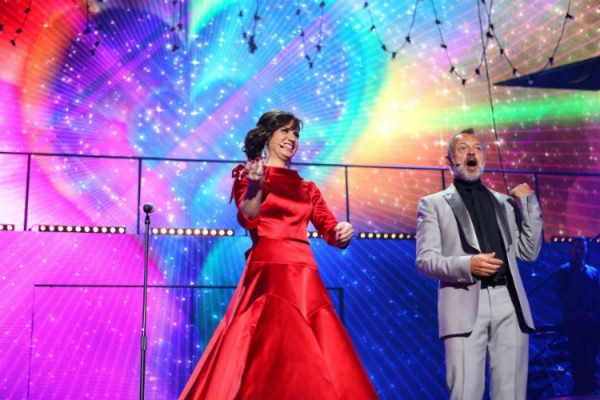 From the moment the concert plans were first announced, sceptics declared that the show would be a flop. With the BBC producing and Graham Norton and Petra Mede as hosts the whole thing would be a joke, they said. Thankfully, they were wrong. The presenting duo were amazing, while the staging was top notch and included a rather impressive LED screen, lots of pyro, flames, and, of course, wind machines. The Apollo stage was small, but the organisers managed to use every aspect to great effect. We’d like to pick a stand-out performance, but we can’t. All 15 acts, along with Riverdance, were fantastic. Even France’s Natasha St-Pier and Spain’s Rosa López, the only non-winners in the line-up, had the crowd on their feet – “Europe’s Living A Celebration” is actually rather brilliant live, who’d have known? Fans of male cleavage should make sure to catch the performances from Emmelie de Forest, Dana International, and Natasha St-Pier. If it’s simplicity y’all crave don’t miss Anne-Marie David, Nicole or Johnny Logan. For some kitsch fun the Herreys and Bobbysocks are a must-see – they can still move y’all, and those golden shoes and purple jackets are shining brighter than ever. The Olsen Brothers still have it, while Dima Bilan proved himself to be a true professional, following a rather unfortunate welcome from certain members of the crowd. When it came to spectacle Lordi and Loreen won hands down. And then of course Conchita slayed. The only real criticism we had, and it’s a rather small one, is that some artists chose to sing parts of their songs in English. They all delivered stellar performances, but “Ein Bisschen Frieden”, “Tu Te Reconnaitras” and “Diggi-Loo Diggi-Ley” are classics – the didn’t need a language change. At the end everyone returned for a medley, of “Hallelujah”, “Volare”, “Making Your Mind Up” and “Waterloo”. Sounds like a cheesy car-crash, yet it wasn’t. Instead we got a outstanding homage of Eurovision’s camp history. Will we ever see Bobbysocks rip the trousers off their backing dancers again? Or Dana International and Conchita emerge on stage hand-in-hand? This was historic y’all! When the camera pans into the crowd, make sure to keep your eyes peeled, because the stars weren’t just on stage. We spotted San Marino’s Valentina Monetta, the UK’s Electro Velvet and Scott Mills, Sweden’s Sarah Dawn Finer and Andreas Lundstedt (from Alcazar), Eurovision’s Executive Supervisor Jon Ola Sand and the contest’s first ever winner, Lys Assia.

What you won’t see

The total run-time came close to three hours. However, the tv broadcast is only going to last for 90 minutes, meaning that producers have spent the last two days chopping away the excess. So what will you guys at home miss? Electro Velvet acted as a warm up for the main event, and gave their first live performance of “Still In Love With You”. This may or may not be shown by the BBC at some point in the future, they were rather non-committal on the night.

Petra and Graham had to introduce Dima Bilan twice after their first attempt was marred by some very unsavoury booing from certain elements of the crowd. Even so, there was still some audible grumblings the second time, and the crew later asked the crowd for some spontaneous cheering, presumably to replace the footage lost to the jeering.

On a more positive note, the audience at home are probably unlikely to see the rousing reception practically every act received. Nicole had to be dragged off stage, after she savoured the crowd’s reaction for a little too long. Even the usually stoney-faced Loreen was visibly moved by the standing ovation she received. Of course there were fluffed lines galore from Petra and Graham, all of which will be dropped from tonight’s show. And then there was the moment Graham tried to crown Lys Assia Queen of Eurovision, but the tiara wouldn’t fit. She ended up having two coronations, whether either will make the final cut remains to be seen. Eurovision’s Greatest Hits will receive its worldwide television premier at 21:00 BST, tonight. British viewers can watch on BBC One, while RTÉ Two will air the show in Ireland. Fans in other countries will have to wait a little longer, although when have geo-blocked web streams ever prevented y’all from watching your favourite Eurovision shows? Check with your local broadcaster for full details of when the concert will be shown in your country.

You an see more images of the show on the wiwibloggs Instagram account. You can also watch our pre-show reviews of all the acts by clicking here. The entire broadcast can be found here, viewable in the USA:
https://www.youtube.com/watch?v=NR8q1l6Cpko

But I recommend you hurry ……

I know what you mean, MF. I like Graham but he is starting to sneer more at certain acts. He needs to understand that this is going to alienate viewers.

@Unknown: I love ‘Graham Norton Show’ and watch it regularly…In terms of Eurovision I feel Graham is trying a softer version of Terry Wogan. I just don’t feel he’s good at it and that his heart is in it. Anyway, I am probably wrong….but for me it’s a clear difference between his show and his Eurovision commentaries.

@MF Graham definitely enjoys the show, in fact he calls it the “Olympics of songs”.

While I have a great affection for all those acts, overall I was disappointed. It was lazy production to have so many Nordic performers while the Balkans and Baltics were ignored completely. I don’t even recall seeing many clips from their winning songs, though we did get the same shots (Nicole & Hugo) we’ve seen a million times before. I’m also fed up with the BBC urging me to throw a party or contribute to social media whenever they put on a Eurovision show. And shame on them for belittling Finn Kalvik. He is part of the essence of Eurovision… Read more »

Watched it and definitely the atmosphere was great. My impressions of all the acts is unchanged: – Graham as much as I love his show, is parallel with Eurovision and I don’t even think he enjoys it. Petra and him were like Santa Clause with the lost child: I pretty much hated their clothes in the first part – Emellie – loved her new haircut, did not like the act – at best she’s an average singer – Anne-Marie David – super great – Swedish brothers – did their best (sort of whatever for me) – Loreen – definitely can… Read more »

@Mar
If you go to watchseries-online.ch (sounds dodgy but it’s actually a pretty good resource) and click on ‘Last 350 eps.’, the BBC broadcast is available there (it’s near the top of the list).

How incredibly brilliant was Loreen’s performance? Apart from her hair 😛 lol but Euphoria will never ever get old for me! Tonight brought me back to 2012 nostalgically 🙂

@Eugene Thanks for the link hun, but it’s available for people in the UK only :/

No matter, I’m sure I’ll find it on YouTube eventually lol.

Damn. I live in the UK and forgot this was on, I watched Gogglebox instead and now I’m too tired to watch. Sigh.

Does anybody know if it will eventually be available to watch on the official Eurovision.tv page?

woohoo i got it! so useful having a brother who is good with computers

this is great! got nothing to do anyways

@Lanti The official Eurovision ‘should’ be broadcasting it. I think you can get onto the BBC Live page, but I’m not 100% sure if you need a UK postcode to access it from abroad! (i live in the uk ;D)

Any possibly to watch from the US (via other broadcasters’ webstreams)?

Will be so amazing to have this right before Eurovision Week starts up here in Aus!