Nearly every year, the countries that once made up Yugoslavia give us dreamy Balkan ballads or high-energy Turbo-folk. The sun is surely shining, as we have a bit of both this year.

Slovenia has only made the Top 10 three times — the last time being in 2001 — but suddenly they find themselves as a favourite with their song “Here For You” from husband-wife duo Maraaya. We have our typical Balkan ballad this year courtesy of Montenegro‘s popular singer Knez with “Adio”. Serbia‘s Bojana Stamenov, Belgrade’s answer to Aretha Franklin, brings a song about self-confidence in “Beauty Never Lies”. And last, but certainly not least, Daniel Kajmakoski will sing the powerful “Autumn Leaves”. These last two songs were originally in the singer’s native language, but they ultimately decided to sing in English.

In case you haven’t heard the entries, you can watch the videos below. Then vote in our poll. You can vote for as many countries as you would like, but you can only vote one time. Be sure to click the box next to every act before pressing submit.

Will we be putting on our sunscreen in the Balkans in 2016? Make sure to let us know in the comments below!

SLOVENIA: MARAAYA – “HERE FOR YOU”

Vote in the poll Wiwi Jury: Cyprus’ John Karayiannis with “One Thing I Should Have Done” 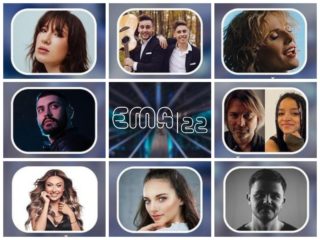 After I’ve seen the performance of Bojana Stamenov in Amsterdam, I can tell you that she is gonna be a dark horse of this year! That response of audience one cannot see just from watching the youtube video. Sorry Estonia and Slovenia, you were my favourites before, but now Bojana all the way. I can see her as a winner or at least in the top 5. Mark my words! Cheers

I love Slovenia… but really? Serbia at the end? I like a lot that song too

They are all good.
Oh wait….there is Serbia too.
This is probably the worst Serbian entry that I can remember.

Yes, I realise that. What I meant was Slovenia were the only ones to release it solely in English—there wasn’t the risk of comparing the English lyrics to an “original” Slovenian version.

I’m wondering whether or not that affects its reception—the reactions to Macedonia and Serbia’s language change have been mixed (and very lukewarm). Would we still feel the same about Slovenia’s song should they have had a Slovenian version at first?

Slovenia is by far the best this year.

1. Montenegro
2. Slovenia
3. Fyrom
4.Serbia
The two first ones are especially good.
Translation of Tom: no one of these are good.

Slovenia is by far the best, a definite top ten in the final. The others will struggle to even qualify

PS. We miss you Bosnia and Croatia!

1.Montenegro.
2.Slovenia.
3.FYR. Macedonia.
4.Serbia (if they would keep it in Serbian , things would be different ).

They’ve all sent decent or good songs this year. Slovenia would just edge out Macedonia for the best, and Serbia is not far behind. Montenegro isn’t as great, but it’s not bad.

Serbia song had first lyricks on english language, who wrote Charlie Mason who wrote as composer and lyrisc songs for Italy 2012 and Austria 2014, and wrote lyricks for Serbia 2015 and Slovenia 2015 , and then for national final was made new lyricks in serbian language wrote by Leontina.

1.Slovenia 2.Serbia 3.Montenegro 4.F.Y.R. Macedonia Maybe Slovenia wili finish on Eurovision 2015 like Slovenia at Junior Eurovision 2014, one of favorites to won the contest with Bulgaria, but only finish 12 of 16 in competition, and Serbia finish on 10 position, and they didnt top favorite for won (same author wrote both songs, and also Slovenia had good commets from Eurovision fan , but in televote at junioer Eurovision they did n get so many votes from televote, same happened with Maja Keuc at Eurovision 2011 , only 22 of 25 in televote, and so many eurovison fan in 2011… Read more »

My order of preference is: Slovenia (top 10), FYR Macedonia (top 25), Montenegro (top 25, but it’s growing on me), and Serbia (below 30; liked it more in Serbian). Looking forward to seeing the return of Bosnia & Croatia next year!

This was always going to be one sided. La Slovénie Douze Point!

Love Maraaya the most(they’re on my top!! Also love their air-violinist partner and cool headphones!!), but Daniel is just beside them ^^ I love Daniel singing in Macedonian, but English is still fine and also he’s good at it, that makes the song become fluently and nice to hear, especially after the soft melody version is decided to be used in May. Unlike Bojana’s song, I don’t really enjoy its Serbian version, but in English in sounds better and grows in my mind. I love Željko’s creation, but this year since there are so many amazing ballads, Adio may be… Read more »

Slovenia and Macedonia have definitely stepped it up this year. Am hoping both are in the final as they are in my top 10 overall. Serbia should not quality and Montenegro is borderline for me.

I have to say, the Ex-Yugoslav nations have really upped their game this year 😛 Its also good to have Serbia back, their acts are always entertaining, weither I like the song or not. They were one of my favorite competing nations with excellent songs in 2007, 2008, 2010, 2011 and 2012, this years entry is good but it lacks something.
My favorite Ex Yugoslav countries this year are FYR Macedonia (catchy song, cute guy) and Slovenia (catchy, standout song, but please ditch the headphones love, you look mental)

Slovenia is by far the best.

I was very disappointed with Macedonia’s change of composition. The language change didnt really affect it negatively or positively for me, but the more modern sound ruined it for me, and it was in my top 5.

Montenegro is my personal favourite, but Slovenia is probably the best of the four. Macedonia also have a nice song that thankfully wasn’t damaged by the language switch, unlike Serbia, whose’s song was completely ruined to the point of no return. The video is also cheap as hell and painful to watch.

Slovenia the best of course. it’s my top 1 and my winner. I like Serbia, my top 5. also like macedonia, my top 11. and I dont like montenegro.

1: Slovenia – Absolutely LOVE this song and hope it does amazing in Vienna. My favourite Slovene entry (Maja Keuc of 2011 is a VERY close second)
2: FYR Macedonia – Should’ve kept it in Macedonian but still is better than the other two. It’s their best entry since Kalliopi.
3: Serbia – Its production is too cheap and the song is dated but I still love the second part of the song. Would’ve been much better in Serbian.
4: Montenegro – Easily Zeiljko’s worst entry ever. I just can’t like it.

@JK Hawaii That’s because the song was written in English…

Macedonia, Serbia and Montenegro can’t even hold a candle to the greatness that is Slovenia. Definitely the best and definitely the only song in the Ex-Yugoslav bloc that can crack the Top 10.

Macedonia in second (a nice song too), Serbia in third and Montenegro in last.

Slovenia definitely has the best song, but the interesting thing is they’re the only one who didn’t release their song in non-English prior to translating it.

I really liked both FYR Macedonia and Serbia’s entries in their native languages, and only FYRM kinda matched its original charm with their English version…

From these 4 ex kingdoms of proud almighty Yugoslavia.. {its yugoslavian national team was really gay on basketball and the only nation that could beat the so called dream team of USA…Were really great glorious times 4 Yugoslavia in sports & in our EuroVision as well as they had managed to win the contest! <3 🙂 } Slovenia especially that i consider sure qualifier {if it goes as planned 4 *Maraaya*..} & Montenegro will most likely qualify to the grand final… About Serbia & my dear sweety butterfly Bojana i have my doubts unfortunately…Too many others eurofans do not like… Read more »

Im really looking 4ward to this year’s 2015 edition OGAE fun club voting that is finally about to begin and kick off at last very shortly! 😀 <3
We already have 12th of April and we are only almost just 40 days far from the big grand final of our beloved Vision! <3 😀

The time has passed so quickly and when i was thinking that we still were having many months to go 4 the 60th Euro Song Contest now we have reached so close instead! <3 🙂

Too bad there is no Bosnia. I am sure it would have been the best Ex Yugoslav entry. 😀 These few years haven’t been successful for Ex Yugoslavia (nobody qualified in 2013, Bosnia was out in 2013 and 2014 and last year Croatia also withdrawn). I think Montenegro will be much better placed than people expect. I am not sure for others – I don’t like Slovenian entry. I mean, it’s an ok song, but definitely that’s not the top 5 or even top 10 entry. Of course, that’s my own opinion. Serbia is so bad this year and I… Read more »

Montenegro! Macedonia second. Slovenia is third, and finally Serbia last.
Montenegro is probably the only Balkan ballad I like 😀

Slovenia! With Montenegro in 2nd.