Ieieeeeeooooo! ‘Amanecer’ is the dawn that keeps on rising and tomorrow it is set to rise even higher when RTVE unveil the symphonic version. Edurne laid it down orchestral style last month in Madrid with the RTVE Symphony Orchestra and we have been waiting ever since!

Tomorrow at 17:00 CET the wait will come to an end and we’ll finally hear what all the hype is about. The Spanish broadcaster, RTVE, will be presenting this new version of the song in a special show which will also feature Giuseppe di Bella, Edurne’s backing dancer in Vienna, and Myriam Benedited, a famous Spanish choreographer who will be in charge of Spain’s performance in Vienna. Benedited was also behind Soraya’s videoclip back in 2009.

RTVE’s Symphony Orchestra is celebrating its 50th anniversary this year and they, together with the RTVE Choir, helped Edurne put the symphonic version together.  An incomplete recording from the performance was leaked on Youtube, and it’s hella promising!

The orchestra gives another dimension to “Amanecer”, creating a much more epic atmosphere and making it truly spectacular.  Edurne and RTVE have kept tight-lipped about what version of “Amanecer” we’ll hear in Vienna. wiwibloggs doesn’t like to speculate but it would be crazy beautiful if the symphonic version ends up blasting out on stage in the Wiener Stadthalle.

Edurne might have met haters after her last  two performances but wiwibloggs never doubted and we know homegirl is going to KILL IT with an orchestra behind her. This tigress has claws y’all!

The Spanish dawn rises tomorrow – you can watch here.

Are you excited about the new version of “Amanecer”? Tell us below! 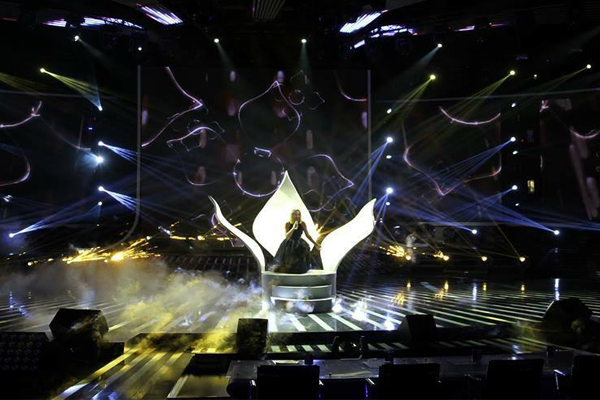 Sounds like the soundtrack to “How to Train Your Dragon” … I love it, but adding this much orchestration to a pop song makes it really HEAVY (man)!

It gives me the goosebumps! Can’t wait to hear it in all its splendor.

Third time’s the charm, I suppose? Hopefully they’ll be nice and give her at least three chances to get it right at the Final.

(And let her use a recording studio microphone like she’s doing in the photo.)

Spain can go up higher on my own list with this version i guess.. <3 🙂

finally!!!… the surprise is that RTVE has created a 4 weeks tv program called Edurnevisión, every wednesday at 17pm starting tomorrow with the presentation of the symphonic version. love u wiwi!

She already said in the first live performance of Amenecer that the final version of the song, and the one we’ll hear in Vienna, was going to be the one she sang that night, which was the original/pop version with some touches of the orchestra version. That shouldn’t be a secret anymore. They will unveil the symphonic version, and it’s only that, a version of the original song.

Why couldn’t you wait till tomorrow to make a post about it?
I don’t get why you are trying so hard to shove Spain down our throats this year.
We all know Edurne is going to flop anyway.