The Netherlands’ Trijntje Oosterhuis turned heads earlier today, when she appeared on stage in that dress. We caught up with her afterwards, and of course we had to find out more. But she had little to add, saying that the dress spoke for itself. We also had to ask about her long list of Eurovision friends, and what advice they’d given to her. The Dutch diva also explained the meaning behind her veil and staging. Watch the full interview below. 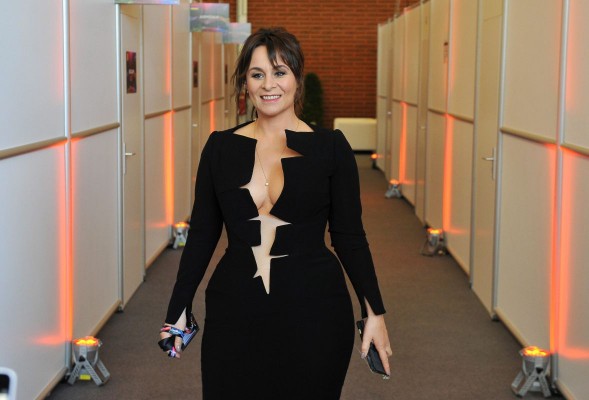 First Rehearsals: The winners and losers on Day 1 (Review)

Yeah Mario and I am going to be calling you Luigi, because I don’t like the name Mario. The country is called THE NETHERLANDS and not HOLLAND. Ignorant boy.

She has a right to wear whatever she wants. i thought this was a song festival not a fashion parade show. Good luck Netherlands i love your song.

You are only allowed to wear a bikini when you look like a model or like Kim Kardashian. When you have a few more pounds it’s not okay?! You are only allowed to wear couture when you are young? And not when you’re 40+. Since when is this? Over the years i’ve seen lots of countries bring the most outrages or weird contesters, which nobody said a thing about. Hell, some of those contestors even won! Everything is this world is monitored by rules, can we not just be happy for the fact that we are still allowed and FREE… Read more »

To the highly respected WIWIBLOGGS TEAM Please make up your mind! I think that your style of making questions to Trintje during the interview was by far NOT appropriate, so please make a change for the next time and try to give to the next following rehearsals even some nice words & some compliments to the artists. You know why I am complaning with all that because we all want to celebrate a big party and we are looking for to see artists smiling with a lot of positive courage during their perfomances at the ESC in Vienna. All of… Read more »

In all the other interviews Trijntje is so happy and positive. She is such a sweet and real woman. The best there is. It’s a shame this journalist shows so much dissapointment about the dress. You can see it makes her uneasy.

That dress is… unique. I’ll say nothing more…

She should ask for pay for wearing that dress has nothing in common with the song. When I heard the song first thought about outfit and moving was to Verka.

The dress is awful, but more power to her.

Love the Dove statement of her dress.

Indeed get rid off the star on her butt and the tacky junior eurovision l.o.v.e. ring. Please dont show those horrific backing singers in newspaper table cloth.

I hated PKN’s dress and can’t wait to see Boyana tomorrow and the comments on her fashion…..

Basically all the questions he asked indicated of how disappointing he felt by watching her rehearsal ….. And I feel that made her feel quite uncomfortable, this is why you guys should actually send Denise to interview the artists … She has a very inviting way about her from all the reviews I have seen !!!!

I love Trijntje but the dress is NOT appropriate for a catchy fun pop song like Walk Along. It’s a cute sexy dress but not for that song. It’s not about being conservative, i love sexy dress….the problem is that it doesn’t look good with that song.

She needs to move more.

I agree with Thomas. I was hoping to see de man met sexy ontbloot bovenlijf

And it is still mysterious whyyy ayy ayy ayy exactly Anouk did not accompany Trisha in Vienna when she was about to really….Hmmm…………

Trisha’s song is pretty cool… <3 It stands out from the others… Im used to call Trijahahsjnje 😛 just only TRISHA <3 😉 And i refuse to call Holland with that lame name Netherlands…! I do not like it at all.. Since the rebirth resurrection of this country since Malmo's Butterfly Vision of 2013 & Anouk with her *Birds* there is only *HOLLAND* 4 me..{Netherlands who..?? 😛 } I have Trisha's song currently as my 2nd favorite from the 40 only behind Georgia's *Warrior*.. Its wonderful tune reminds me of summer <3 The ''whyyyy aaayyy'' part of her song really… Read more »

her accent is so sweet