William: During her first rehearsal this morning, The Netherlands’ Trijntje established herself as a favourite….for worst dress of the year. It’s form-fitting — which is fine — but there is simply too much breast on show. Her spilling cleavage led to cackles in the press centre, as did a star-shaped cut-out on her right buttocks. My sense is that the rips in the dress convey the pain of a break-up, which makes sense thematically but isn’t instantly obvious. There are some nice lighting effects where the stage goes from black to completely green and completely red, and we see shadows of lovers embracing on the LED screen. Vocally she was on point and I actually liked it on the second take. The why-ai-ai-ai really does get stuck in your head. PS: Trijntje, why are you giving us a death stare at the end of the song?!

Padraig: The performance opens with a close up of Trijntje’s face. She seems to be in mourning, and her eyes are covered by a netted veil. Then the camera zooms out and we see what she’s wearing… oh dear. Think Moran Mazor but with less material. Everything comes across as rather morbid, completely inconsistent with the frivolity we witnessed in the music video. Trijntje is static throughout, and there’s minimal movement from the backing dancers. However, the LED screens are fab, and the vocals are on point.

Trijntje is an early favourite for the Barbara Dexter Award. The dress shoes way too much cleavage! It distracts from the song

Netherlands Meet and Greet at Eurovision 2015 @gert Thanks you are so right on this one!!!
Think people, please think first, have some respect.
Trijntje does not look bad, she had a great body esspacialy for her age.
let her be Proud and confidence in her dress, because she does!
ITS not ok to make Someone feel bad About her own body like that.

At times…..Eurovision is really about the “queers” no? Not gays, because I am gay myself, but “queers”. Here in The Netherlands we have a saying: “If you disagree with something, say it straight into his/her face”. Here in Holland we would respect it if someone said during that meet-and-great in plain honesty that Trijntje looks like a slutty widow. Yes, it’ll result in a very hefty discussion, but strong women know how to deal with that. But no, we don’t do that, because that would be insulting. Then ask yourself what the difference is if you say these things behind… Read more »

ouch
they wrecked the staging on this one

Well Trisha’s song is currently my almost winner number #1 <3
The song of Holland is just very good.. <3
Hopefully she will manage to qualify to the big final…Although i have my serious doubts…We will see how it goes 4 our black mourning widow.. 😛 hehe

Dutch paper Telegraaf has a 3-minute vifdeo at the bottom of this article:
http://www.telegraaf.nl/prive/songfestival2015/24028804/__Buitenland_lacht_om_Trijntje__.html

I dont understand all the negative comments to be honest. It was never a happy a song to start with, listen to the lyrics. I LOVE the dress, looks good on her imho 🙂 Vocals? The best today. Im still sure she will qualify. I think it will look great on tv.

Hang on lads, this was only the first rehearsal. This type of dismissive negatively might lead to further reporting restrictions in Turin (or wherever) in 2016.

Hi Eugene therefore She said at the press conference …..
she is unhappy …..
she will make a lot of changes ….
that was only the first rehearsal and there will be a lot more beauties to come …
…more to come promised …..

They have got it totally wrong this year…………………..It’s a happy song. The dress does not work at all.

The background LED screen looks awesome. The outfit….. well….. it’s only the first rehearsal. Anything could happen.

Not sure if it will work. At least Trijntje said during the pressconference that she was not satisfied. So there will be some changes.

Guess I need to see the full footage first.

The look the Dutch team is going for (the Widow’s veil especially) doesn’t match the song. Too forced! Actually, this makes you wonder whether the lyrics match the upbeat sounding song at all. I don’t particularly like or dislike the dress, but please make the ankle straps disappear. Plus, Trisha’s outfit does not at all match the background vocalists. Styling seems a mess. I feel kinda sad for the Dutch team now because her voice sounds really good and actually changed my mind about this song. With this staging, however, I fear that on the night of the first semi… Read more »

I think they will create a sort of videoclip! It will look great on screen I ‘ m sure

She looks good but I’m straight

@roy: Nobody’s saying that Trijntje is not allowed. We’re just saying that she looks kinda awful in this dress, I don’t think it makes her look at her best (whereas Conchita looked stunning).

The song is pleasant
The Vocals are great
The Background works very well
The Dress is too much, It doesn’t hug her curves in the right places …. The top part looks like an interpretation of the beginning of ICE AGE (the cartoon, when the ice breaks) but if she feels comfortable I believe it is not gonna be an issue at all !!!!

Overall, pleased with it…. Tho, not my favorite song and a borderline qualifier for me.

Guys guys what about the backing vocalists’ outfits OMG.

Okaytokay…
very nice good afternoon from sunny Vienna – ESC Stadthalle 2015.
Trijntje tried her best with this song and I am feeling sad for her staging today.
With this GIG at stage Trjnte looks really lost, so for today I feel sorry.
Maybe she makes a complete change now the next days, I hope for her.
BUT Trijntje can perform on stage and that wonderful with a lot of quality.
LOOK HERE THIS VIDEO SHE HAD A DUET WITH LIONEL RICHI SOME TIME AGO. ……..”Face in te Crowd ” https://www.youtube.com/watch?v=fbGIX31ammc
…..more to come

Last year the woman with the beard was allowed. And now trijntje should not wear that dress. Strange

When Anouk sang “Birds” – which was quite a dark, gothic song – she was dressed all in black but there was a lightness to her. Now Trisha is singing a much more upbeat song but is dressed like someone at a Geordie Shore funeral.

Such a tacky porn-star dress. Does she have no dress sense? Or is she that insecure?

Plus from this camera angle, the background looks even more ominous and spooky than the armenian one. And the backing vocals are drowning her voice, at least in this video…

I think the dutch lucky streak is over…

Whoever greenlighted that dress should be in prison.

Not only should she win the Barbara Dex Award, but they should rename it in her honor.

The cleavage. Just no.

I love the visuals and her vocals are amazing. I also like the dress. I don’t love it, but I don’t hate it either. The song is great!

It is not really what I expected. I think the outfit will be trending on the Dutch new tonight.

This is such a light, sing-a-long tune, and they give it a… morbid theme? The stage looks really nice in the video though.

Can’t see the “death stare” in the video but it sounds hilarious. The best positive is the images on the screen behind her – they look great!

Yikes (referring to her the death stare)

@ Bogdan. Thanks ;-). Lol that is hideous and that creepy look she has on her face makes it worse.

If you have something to say, don't say it at all

Will, I feel your sentiments! Then again, I’m not a fan of the song to begin with!

Now I have the image of Patrick Star from Spongebob Squarepants stuck on her booty cheek in my head!

All the staging is disappointing so far, but they are only short clips.

It seems very dark ON stage. I would prefer to see the artists. No WOWS so far. 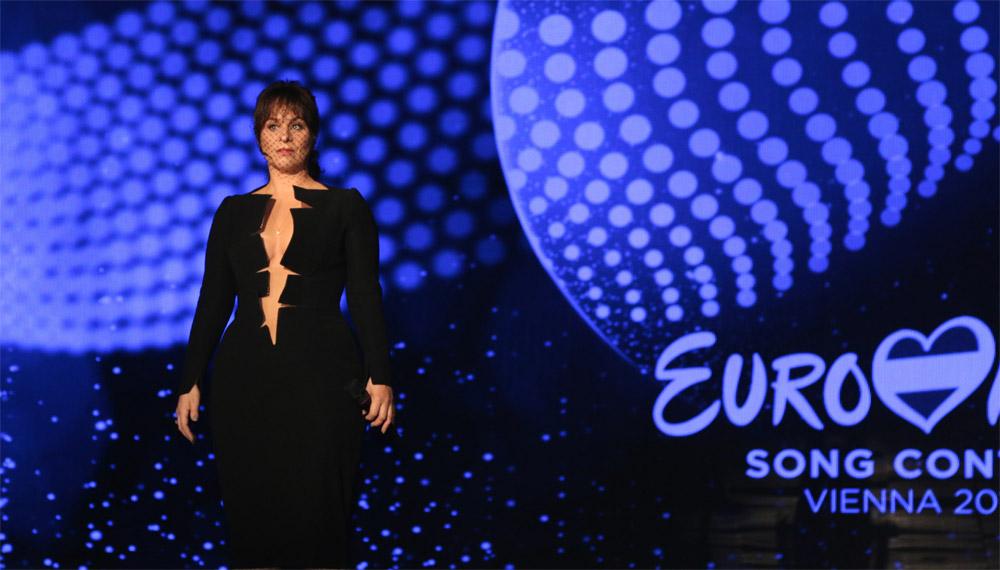 Good lord, it’s hideous. I couldn’t see the dress but if it’s as bad as you say + this horrible performance it’s surely not a qualifier.

I am completely embarrassed.

LOL. The death stare must be for the cackles in the press room.