William: Montenegro’s Knez isn’t playing. He’s a seasoned performer and that really showed during his first rehearsal this morning. This oozes class. From the LED lighting — which features stars and mountain vistas — to the choreography — which includes some lovely violin bow action — everything is paced and builds so nicely. When the beat picks up halfway through I’m in heaven and by the time Knez and his dancers are spinning I’ve reached nirvana. Not everyone will catch Balkan Ballad Fever. But I’m glad I have a temperature!

Chris: In a completely unsuprising move, Montenegro have staged a Zeljko song exactly like every single other Zeljko song to be at Eurovision. The backdrop is yet another one featuring stars and a nature backdrop, but the red and blue is at least something a little different. I’m not feeling hugely inspired by this one, but it was a safe enough performance by Knez. His voice is as strong as we expect from such a hugely experienced artist as well. There’s just nothing that makes me think that this is going to challenge for any big spots this year.

Padraig: I’ve never been a Balkan ballad fan, and that hasn’t changed after today. There was nothing to grab me. The vocals and staging were all competent. Kudos to them for carrying the theme from their music video. We see mountains on the LED and the dancers are kitted out in traditional garb – it’s basically a live action Montenegrin tourism pitch. But the song remains a non-event. I’m not moved, I’m not excited, just indifferent. 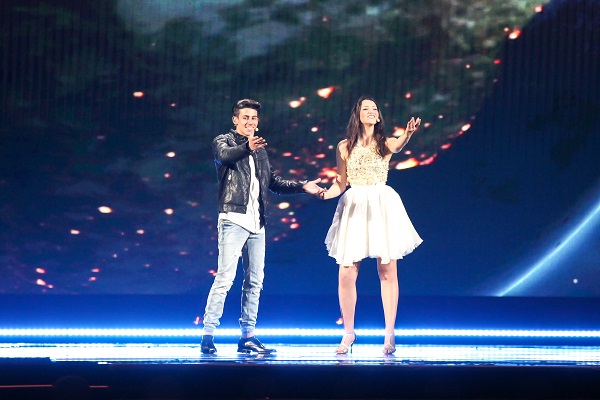 Interview: Elhaida Dani – “I missed my voice, but now it’s back!”

I adore this song inside and out and lucky I didn’t get my hopes up for amazing staging. Shame.

I love this song and I think the graphics look stunning! Can’t wait <3

I don’t think it is going to the final, but I do like it. The staging is also what I had planned and wanted.

Last year they qualified with the only one “the same block” country that could have voted for Montenegro: Albania.

This year it’s only Slovenia. But I’m absolutely sure they will go through.

They didn’t capture the performance until the end. IThis one is getting good tbh.

This is becoming one of my favourites. I love that Knez is joined on stage with his army of ladies.

This definitely goes to the final and will probably be the first qualifier in the ranking order of this semi. His voice and presence totally blows apart everything that came before it. Montenegro does not have allies in this semi but with his talent, it won’t matter.

Well i personally think that the song of Montenegro has bigger than just only a small chance to qualify to the final..{as dear Eugene claims..}
I might do not regard Montenegro sure qualifier but i do not see it as just total outsider though…Its a small dark horse that will find its way 4 the big final..
I like the song…Its my 6th most liked on the 2nd SF & my 16th most liked overall..

The staging reminds me a little of Serbia 2007, it’s pretty good. It must have a small chance of squeezing through to the final now.