William: Maraaya’s Marjetka and Raay may sit and stand in place throughout their entire performance, but their act still has major drive and energy. Bathed in orange light Marjetka rests in place and lets her electro violinist take care of the physical movement, while Raay snaps and plays the piano. In terms of styling it’s very pared down with Marjetka in a demure white mesh dress. But don’t worry: The violinist is bedazzled, as are Raay’s headphones. They still need to sort out some of their camera angles, but on the whole they worked really well, as did the white strobe light that flashes to the beat at key moments. It all helps give this pace so that the three minutes just fly by. Slovenia is definitely headed to the final. Are we headed to Ljubljana in 2016?

Padraig: I’ll always love “Here For You”, and it still ranks as one of my favourite entries this year. But I feel majorly let down by the staging. I’m happy that they’ve kept the headphones and invisible violin. My bugbear is with their use of the LED screen, or lack of. It feels almost criminal to have such a marvelous tool at their disposal and just use it to flash a few lights. This shouldn’t diminish its qualifying potential. But the chances of them winning the whole thing have been diminished. Girl Power: Will these Eurovision stars collaborate on a song? 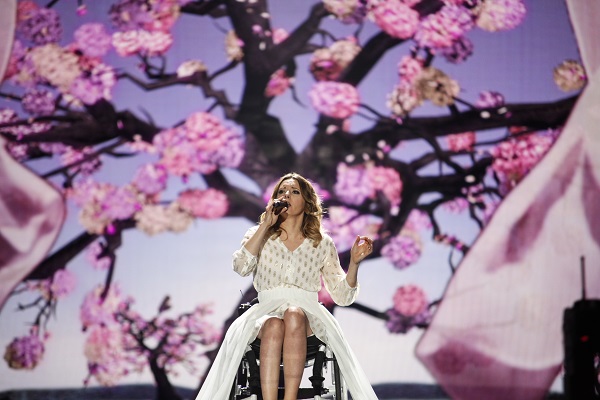 Poland: Monika Kuszynska in the cherry blossoms at first rehearsal

I’m not too keen on her dress, it looks like an old fashioned wedding gown. Are people really that bothered by the headphones? With such a good song I don’t thinks that’s gonna be a major distraction for people watching the performance for the first time.

I think that there’s no need for LED background. Why is that Padraig so in love with that screen. Marjetka and Raay want to keep the point of the show the message, the intimacy of the song so therefore I think that a background would’ve ruin all thing. The 30 second snap made me cry because of the happiness what’s really rare and I’m really proud on our song this year 🙂 I Hope you’ll find the point of non-use of LED 🙂

MOST OF THE COUNTRIES HAVE NOT STILL RECOGNISED THE FACT,
THAT FOR ALL OF THEM THE LIGHTS AT THE FRONT STAGE ARE TO DARK THEREFORE MOST OF THEM ARE STRUGGLING WITH THAT PROBLEM AS ALL OF CAN REWATCH IT ON OUR PC or TV SCREENS.
So that means for me:
Either they are going to change the colour of their clothes for the SEMI -FINALS in
more whites and no darks, or they have to speak with the broadcaster ORF to resolve these problems immidiately.
I am speking for a mojority part as a press member.

Slovenia will go high. To the top. Got my vote on thursday and saturday.

I like the song but don’t like her accent. It doesn’t sound natural to me..a little fake..

The lunar sign for the Grand Final is Leo, this means the public (represented by the Moon) will vote for those, who appear glorious and confident on stage. This could mean the public could fall for Italy.

On Jury Final Day the lunar sign is Cancer, which might indicate that their is politics involved in the voting, jurors with an agenda. Strong neighbour voting.

If Cancer would rule on Saturday as well, we would see heavy diaspora voting, which just might not be the case this year.

So 2015 Eurovision will bring us something more fun, quirky and uplifting. I would bet on Slovenia

Astrologically speaking Slovenia is really a hot favourite to win this year, as the Song Contest Final and Semifinal 2take place while the Sun is in Gemini. Gemini favours uplifting, light-hearted, up-tempo pop and dance songs, whereas Taurus favours dramatic ballads. I just can’t see a dramatic song win this year, which is sad because I love Il Volo so much.

Obviously we all know why she wears the headphones and I like the sentiment but the majority of people watching on the night will be seeing them for the first time and i think will be a bit distracted by them. Howevrer, I do think that the song and her voice are good enough to overshadow the headphones though 🙂 Go Slovenia!!

Well Slovenia might not possibly gonna win the Diamond Vision but at least can still finish on rather high place in the top10 or top5..
I do not see Maraaya bombing in few days..
I truly think that they will gonna qualify to the final alone of course..
They are hot favorites to succeed the best ever place/result 4 Slovenia in Vienna 🙂

I kind of expected a little more from the performance. But in saying that, I love Slovenia this year, really classy, unique entry, I just wished she ditches them headphones, they are really not needed. Slovenia is going to the final though, I am very sure of it. I dont know if it will win though, I’ve a strong feeling we are either heading to Scandinavia again (Norway) or Italy. Best of luck to Maraaya though.

Guess people won’t hate on this song since it’s Slovenia even though it has almost the same staging as the NF.

They are such a CUTE COUPLE <3 I would be so thrilled for them if they won and I consider it a dark horse! Good luck Slovenia <3