If you thought the betting odds were in flux after the Semi-Final 1 contestants had rehearsed, you ain’t seen nothing yet. The Eurovision Song Contest 2015 betting odds are constantly changing (and by constantly we mean Belgium and Latvia passing one each other like 50 times while this article was being written). But here’s where the odds are after the completion of the semi final 2 rehearsals. Grab your coins and place your bets!

Latvia’s Aminata Savadogo has “love injected” the bookies after her outstanding rehearsal Thursday, and she now sits as 14th favourite to win in the betting odds, while she was at 18th on Tuesday. The Latvian diva’s vocal perfection has lifted her way up in the betting odds and some bookmakers now have her as low as 40-1, whereas on Tuesday she was at 66-1. As we said before, Aminata is battling Belgium’s Loic Nottet, who has surprisingly lost one place in the ranking to Spain’s Edurne, who hasn’t even rehearsed yet!

Even though many fans weren’t impressed by John Karayiannis‘ intimate performance yesterday, the agencies seem to have been touched by the Cypriot representative’s sensitivity on stage. John is now the 15th favourite to take the trophy, while he was the 19th on Tuesday. Surprisingly, both Cyprus and Latvia have overtaken Albania, Armenia and Belarus, who are a bit lower than after their first rehearsal.

Today, the bookmakers are putting end to a situation that was almost paranormal. Georgia’s Nina Sublatti has finally taken flight on the betting odds and now she’s the 16th favourite for the victory. Until Tuesday, the Georgian warrior was only in 30th position. Nina may have rehearsed on Tuesday, but her fierceness has been stucked in the bookies minds and Georgia now has all their bets on blue!

It’s not all good for everyone in the bookies. Surprisingly, one of the acts our readers and wiwibloggers put amongst the best rehearsals is in free fall on the betting odds. That’s Hungary’s Boggie, who was at 19th on Tuesday, but today she’s sitting at 26th with all her odds drifting. It’s certainly surprising to see how many of the participants in the first semifinal are changing their places when it was the turn of the second semifinal contestants to rehearse. 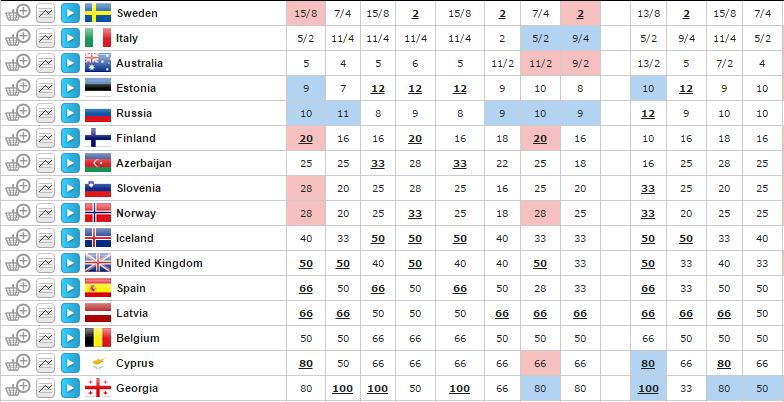 If we look at the second semifinals odds itself, the situation is quite interesting. According to the bookies, Malta is the 10th most likely winner of the semifinal, but Amber is the 33rd favourite for the victory. Countries like Poland or Ireland, are ranked higher than Malta for winning but currently aren’t forecast to do that well in the semi. Any volunteer wanna teach maths to our beloved bookies? The agencies believe Malta should make it to the final along with Sweden, Azerbaijan, Slovenia, Norway, Iceland (who will of course be announced last as always), Latvia, Cyprus, Israel and Lithuania. This leaves Ireland, Montenegro,  Switzerland, Poland, Czech Republic, Portugal and San Marino. Do you agree with the bookies’ opinions? Tell us below! 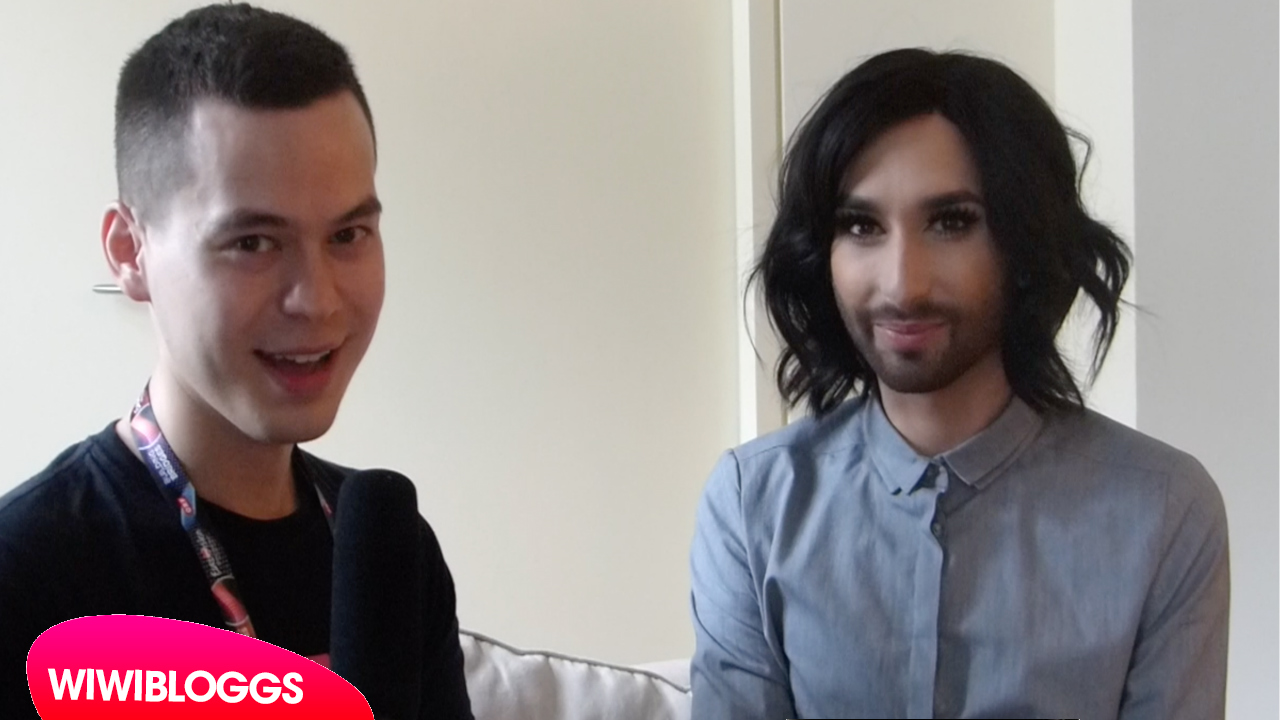 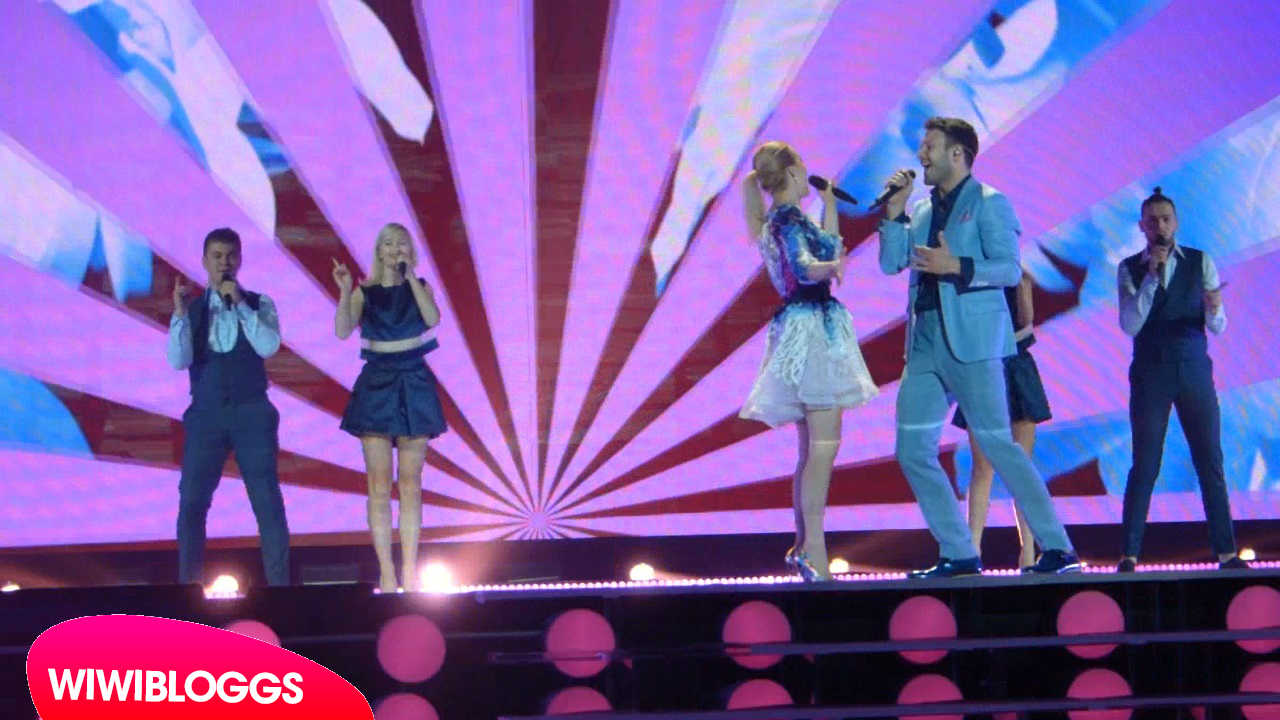 From all the rehearsals so far I can finally say that most of my favorite songs have done an amazing job. Latvia nailed it, Ireland is so pure and lovely, Georgia is strong and powerful, Belgium is modern and interesting, Portugal is just a guilty pleasure and her voice is just full of soul, Albania is alive. All in all I am pretty contempt with the songs I like and how they managed to translate them on the big stage

@ Fatima
Where have you read that Poland may win? I love this song, but I have never heard that it has a chance to win.

My opinion: I’d like Lithuania instead the boring ballad from Poland

Georgia, Latvia and Belgium are still bad. Latvia is the one I’m expecting won’t qualify because Semi-Final 2 is stronger than Semi-Final 1.

So happy to see Aminata climbing 🙂

Sweden or Holland for #1

No Lettland is a real copy.

Sorry, I don’t feel Malta, not this year. My top three:
1. Georgia with Nina Sublatti
2. Belgium with Loic Nottet
3. Latvia with Aminata Savadogo

I find it quite funny and sad how the success or failure of a song these days is dependent on it’s staging!! In it’s 60th year, the majority of the ESC’s 60 years were all about a song contest, it now seems more and more about a staging contest. It is clear that staging can elevate a song’s popularity; it’s quite ridiculous really the emphasis placed on the staging. What is clear this year though is very few countries are relying on props/gimmicks on stage and relying on the strength of their song………….at least that is a step in the… Read more »

I will die inside if both Latvia and Ireland don’t make it. I hope both will qualify. Latvia seems to have more support so ill vote Ireland.

Latvia isn’t copying anyone. That’s like saying Belarus is copying Alexander Rybak because they both have violins. She is original, she is vocally on point, she is Aminata.

@Eugene ESC UK
Thank you for your comment, I’ll correct this now 🙂

Lettland is a real copy of Loreen, thats it. And Russia go home

I’m not taking much notice because it’s pretty obvious after the semi finals that the odds will change drastically again. I see steep falls for Estonia, Finland and Iceland, and see huge gains from Georgia, Malta, Albania, Czech Republic and Malta. Things will begin to unravel in a few days time.

i said it before georgia is a dark horse and i think nina’s odds will rise again after she qualifies from the semi final. i really hope my country ireland can qualify, it’s definetly not a winner but i think it’s good enough to get us 8th-10th in the semis

Georgia took it away in rehearsals. I still can’t get the fact why is it so down in the list ????

well Malta that low, please vote for Malta, the most underrated country this year

This time last year after two rehearsals Conchita was around place 12/13 with the bookies too! After ther semi’s she shot up to second place…so at this point in time I wouln’t put any money on the first 5 countries….! (My personal suspions are that we’re gonna have a surprise winner….keeping my eye firmly on Belgium!)

I’m 70% sure Czech Reoublic will qualify. I want:
Ireland
Czech
Anyone really I just really want them

Latvia will not qualify to final even

Well Aminata does not really copy Loreen..
She was inspired by the famous artist Bjork of Iceland & that is very obvious..

Lettland its a copie off Swedens Euphoria. They should not be here. Cypres have the best song this year (after Sweden)

I cannot help but notice that Iceland has been consistently so high in these rankings?

Armenia is so low

Really lame that Georgia was at the bottom 4 bookies until now…At one point Georgia’s song was 39th from the 40!
I didn’t justify at all 4 Nina’s *Warrior* to do that badly in bookmakers..
Georgia deserved to be at least in the top20..

The same about Malta’s*Warrior*..
I hope & cross my fingers 4 Amber to manage of qualifying because she simply only deserves it with that strong powerful song of hers..

I hope Ireland doesn’t NQ. If it did it would be absolutely tragic! I’m hoping for a few things to change especially in SF2 – most notably I hope Cyprus fails because I can’t get through that song at all…

I dont see why Ireland and Poland wont qualify really, they both have a lot going for them, popularity, neighbors etc etc. If anything, Cyprus is out, so to is San Marino. Semi 1 is much harder to predict as it has many Ex-USSR and Ex-Yugoslav nations, it also has countries such as Romania and Moldova who qualify every year regardless, so basically anyone can qualify from that semi. Semi 2 is the harder and more open semi final.Sweden, Norway, Azerbaijan and Iceland are pretty much locked but Im sure the remaining six places will go to Slovenia, Poland, Czech… Read more »

I thought that Semi 2 would be the easier to predict, but I have 9 countries as either “definitely” or “probably” in Semi 1 but only 6 in Semi 2. I’m happy that Czech Republic have finally burst onto the scene with some of the fans, even if the oddsmakers haven’t quite realized it yet; I both think and hope that makes it, and I’m growing more and more confident in that prediction as the days go by.

We gotta wait for semi-final 2 to finish airing to see which country is really…going ..to.. win. Bet those vote counters working in Vienna will start betting by then >:-)

I don’t put faith in bookies. What really matters to me is what actually happens on the night – underdogs can rise and fan/oddsmakers’ favorites can still fall

Fatima :- Forget about that site…………..both Latvia and Belgium should qualify and Poland won’t win…….just trust me on this one.

Luis :- You are showing the chart for the Semi-final 2 “win” market and not the Semi-final 2 “qualify” market. In the “qualify” market Poland is in 9th, Malta is 11th and Ireland is 14th. The order can be different and it is. So that ties in with the ESC win market and sorts that out and makes more sense. They are all different markets, so it depends what punters bet on that determines the odds. Also In the semi-final 21 countries vote and in the Final all 40 countries vote, so the semi-final market may be different to the… Read more »

I’m not surprised by all this to-ing and fro-ing because there are so many shades of opinion coming from fan sites in 2015. This one rates Belgium and Latvia highly, but the site which gets my next most attention has them both not qualifying and has even suggested that Poland could win. This is fun.

And secondly, how can CYPRUS be that high?!

YES!! YAY for Aminata and Latvia! Last year they were my least favourite and now my number 1.

@William Adams Lee Adams
thanks so much 😀

Personally I think its criminal that Malta are so low! Its easily one of the best songs in the semi yet its been constantly underrated throughout the Eurovision world, even by the accredited press!! Except for you guys at WiwiBloggs… you really seem to enjoy it dont you? 😀

its rubbish that the netherlands are so low

Situation will change again after the semi finals.

The more the merrier. Welcome Australia! Thank you for building buzz about this year’s contest!

Estonia still number 4!!! <3 I doubt Australia will win and I think they could come second or anything after but they won't win, I am Australian and I think people should stop sending hate about the fact that we're in ESC this year, you should focus on the song, not who sent it. Quality over quantity (in this case quantity is the country lol)
xxoo