At last night’s Jury Final for Eurovision 2015, Australia might have gone a little heavy on their smoke machine. Belgium’s Loïc Nottet performed immediately after the Aussies, and we could barely see him on the screen. At first we thought it was the camerawork and the white screen, but now rumours are swirling that it was actually Australia’s smoke and pyro. 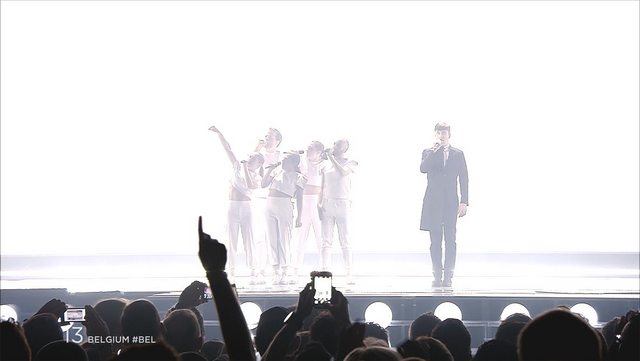 The delegation is rumoured to have lodged a complaint about this, saying that it would affect part of their final score. Although they requested to perform again, this request was apparently denied. Juries were told to disregard the smoke instead.

Loïc is currently the fourth favorite in the odds to win tonight’s Grand Final, which could bring the contest to Brussels next year. Do you think this incident will affect Belgium’s score? Was is unfair to not let them perform again? Nina Sublatti on the Red Carpet: “I am doing the feminist woman” Charlie Mason: Meet the lyricist behind Bojana, Conchita and Maraaya

Loic’s staging is awful anyway. That’s the only let down of the presentation of his song.

I’m Australian so don’t attack. I’m so annoyed by Guy Sebastian. Trust us to ruin another countries chances…

I think it would look better with smoke, it kinds of adds to the tune.

I don’t think it will affect that much, but it really is unfair to Loïc, it’s not his fault Australia used so much dang pyro and he shouldn’t be forced to perform in such conditions.
I think they should turn down the pyro a little bit for Australia tonight to avoid this happening again, it’s what’s fair to both perfromances.

Completely agree with your thoughts this will not impact the jury’s voting. However, I think you should be looking at Austria/ORF/EBU to ensure it does not occur tonight.

Less than 2 hours until showtime!

I don’t think it would affect the jury’s vote too much, but if it’s really bad for the performance tonight, it OBVIOUSLY will affect the televoting– how could it not? either because it will be distracting, and people will think “why is there so much smoke” instead of “this song is great!”, or because they really won’t be able to see it and so it will come off as not as good a performance. they better have taken care of this (I’m looking at you, Australia!)

This is really unfair to the Belgian delegation. The juries were asked to disregard the smoke? “You didn’t see anything, but disregard that. Pretend that you did.” Wtf?!

I am so rooting for Belgium now! I hope you guys win!

@mad-professor The performance is part of the whole package, thus it would affect scores. Would Sweden be a favourite if not for the awesome staging? Doubtful.

lol who cares, the songs is so annnoying, it should not win byeeeee GO RUSSIA GO ITALY GO SVERIGE you are the best <3

More interestingly, why is there a separate jury final anyway? Should ALL the scores not be based on the same show? Should the jury and the audience not be judging the same performance?

They didn’t let Sanna perform again in the jury final last year after her lights malfunctioned, so stop whining.

I think it is very unfair. Anyway, I hope that Belgium will win tonight because (maybe I’m a little bit naive) Luxembourg could possibly return in that case. 🙂

I hope it’s fixed before tonight. If Loïc was forced to perform in smoke then that is really a scandal. The organisators should own up to their fault and make things right by letting him perform again. The jury voting is so important. Hopefully it doesn’t matter in the final results. There is no shame in stopping the show for a minute to solve the problem. There is shame when they don’t give fair shots to every country. Come on, Loïc, give it your all tonight!!! <3 <3 <3

Hopefully (and probably) it didn’t influence the jury results but ORF better do something to fix this until tonight!
I wouldn’t be surprised if Belgium took the victory.

It will make a difference when watching at home for the first time. You can hardly see the dancers who are wearing white.

Lots (especially the UK) do not watch the Semi’s so will be basing their opinions on this performance tonight.

They need to tell Australia not to have so much smoke but then I suppose they can’t annoy their precious Australians can they?

ORF have done a pathetic job in the running order… Sweden and Norway one after the other…. Azerbaijan, Russia and Georgia all in one block and then Albania (the Voice of Italy winner) before Italy.

It’s so ridiculously unfair and if it affected even one juror’s vote, it’s completely ridiculous.

Probably it won´t affect the final result, but that´s not fair. If it affects the staging you´ve been designing and creating for the Finale, the ORF shoud do something.

Anne-Sophie already knew that ”We’re only left with smoke”…
Seriously though, I doubt this will affect the final result. The manner in which it stormed into the itunes charts in so many countries means that Loic is unstoppable. I am not sure it’s a winner because of its ultra-modernist style, but there’s no way it can be ignored.

Anne-Sophie already knew that ”We’re only left with smoke”…
Seriously though, I doubt this will affect the final result. The manner in which it stormed into the itunes charts in so many countries mean that Loic is unstoppable. I am not sure it’s a winner because of its ultra-modernist style, but there’s no way it can be ignored.

@ Sopon
We the readers didn’t see the Jury Final, so we cannot judge how much the smoke was visible;) I hope the EBU know what they are doing. Either way, Belgium is my favourite!

Well, I’m not sure if smoke is the problem 😉

It wont affect the final results, he will still score high with the televoters and I actually think Belgium might take the victory tonight….the song just keeps growing on me! I will be happy if either Norway, Sweden, Belgium or Estonia win tonight. Italy will feel like a bit of an anticlimax (much like Azerbaijan in 2011) great show, but not worthy winners. Also, I dont think Brussels could host ESC, they have no suitable venue, the nearest one is in Hasselt. I think if Belgium win, Antwerp will be the host. It would also be nice to see a… Read more »

Such unfair to no let theme compete again! But the most important question: will this issue be fixed ’till tonight ??

Reminds me of Sanna’s light from last year. Don’t think it’ll make much of a difference.

It does ruin the whole black and white contrast 🙁 And I want Loic to win!!