On the day of the Eurovision 2015 grand final, Ukraine confirmed that they will return for the Eurovision Song Contest 2016. Eurofans around the world rejoiced, as the land of Ani Lorak and Verka Serduchka always brings something memorable. Who else can we count on for a smart staging gimmick and a quality pop song all at once? Here are give artists we think could bring Ukraine back to the contest with a bang.

Their name in Ukraine is Via Gra, a reference to the drug that gets men going. But it’s also a way of saying “vocal-instrumental-ensemble game” in Ukrainian. Obviously. Outside of Ukraine, they go by Nu Virgos.

In the grand tradition of Destiny’s Child and the Sugababes, this three piece girl group has gone through various members since its founding in 2000. The former members include Vera Brezhneva (a massive star in Ukraine who is also featured on this list) and Svetlana Loboda (the “stripper in a hamster wheel” from 2009). They know how to drop powerful harmonies and ooze a cool pop-rock vibe.

In some countries, Eurovision is known as a career killer. Yet “Shady Lady” Ani Lorak used it to boost her already-impressive career. She’s a huge and influential name in Ukraine, and her recent work (such as “Oranjevie Sni” and “Korabli”) is levels above “Shady Lady”. She can definitely earn another top two result, piece of cake.

Although Australia is still in limbo about next year’s participation, Ukrainian-born Australian singer Elen Levon could fly both flags if she represents her country of birth. She started off in a girl group in Australia called Panjo 5 and launched her solo career in 2011. The only problem? It’s unsure if Ukraine would be cool with an artist who left the country before she turned one.

Yolka (or Elka, in some media) is one of the most successful artists in Ukraine and Russia. She has won the Golden Gramophone three times, been recognized as Singer of the Year in Glamour, and judged the Ukrainian edition of X-Factor. Hopefully she can take time out of her schedule and visit Sweden in May.

Vera was a long-time member of Via Gra (as mentioned above), but left the group to present a Russian TV show known as “Power of 10”. She has since returned to music and her duet with Dan Balan, “Lepestkami slez“, is the most-watched music video on Russian music producer ELLO’s YouTube channel.

Who do you want to see perform for Ukraine? 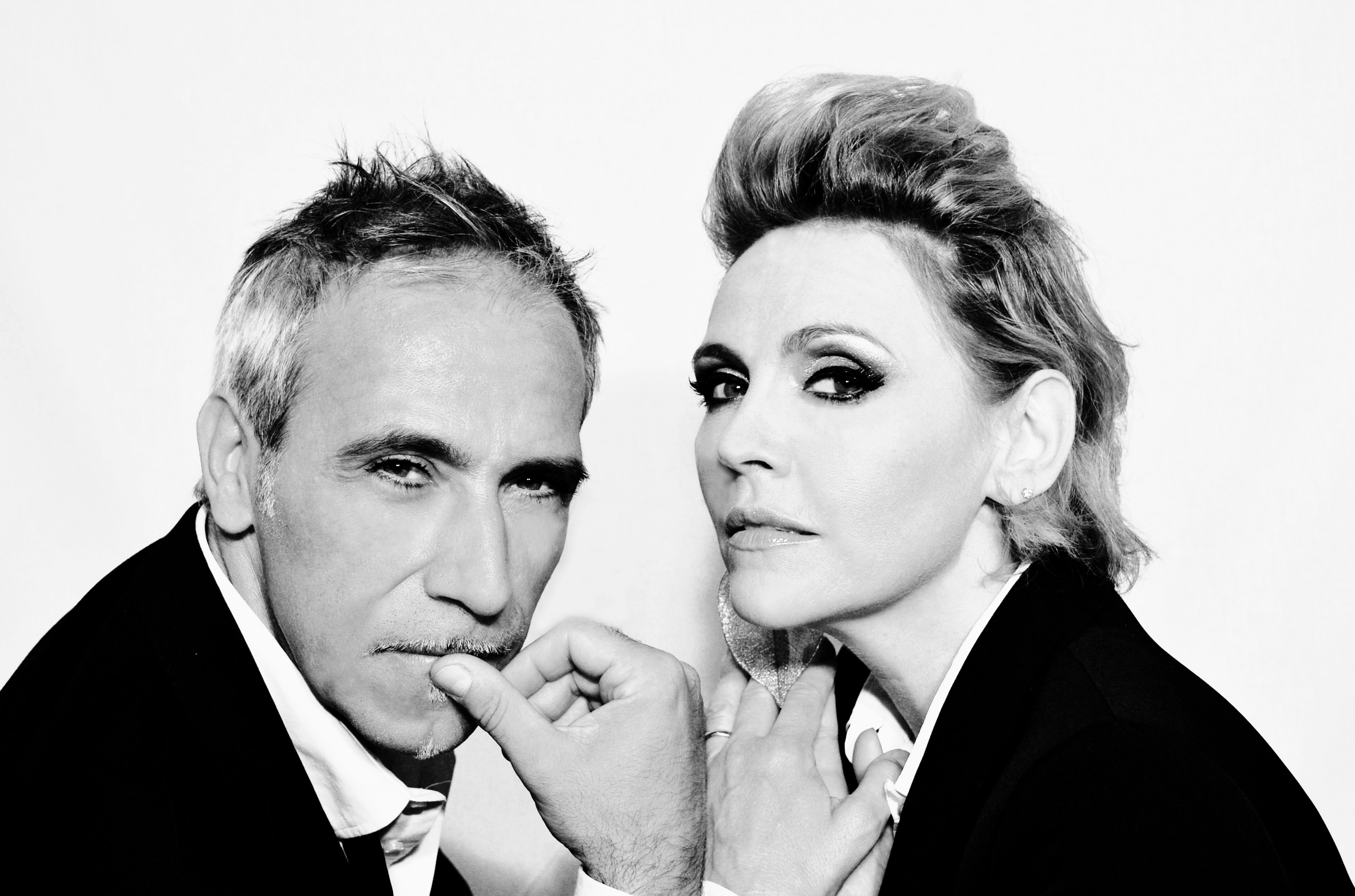 I would like to see ukrainian superstars like Okean Elzy, Sky, ????? ???? or ???????, but I doubt that they would be interested.
There are some interesting newcomers such as:
The Hardkiss
AIDA (Aida Nikolaychuk) – yes, another beautiful woman, but her voice is amazing
Viktor Romanchenko – strong voice, he sang live concert with “Queen”
Mysterya – promising sympho-metal band.

ukraine is the absolute best and most consistent country in eurovision BECAUSE they always send someone with a great and catchy pop song and brilliant staging – and they always do well because of it too.

hopefully they’ll stay this way and people with bad eurovision taste can stay pressed or just wait for france’s next artsy fartsy ballad or something.

Fikri, it is dance group called Kazaki. The can not sing,only dance and they aren’t popular in Ukraine.

what is the name of the dance group that performed with loreen in melodifestivalen? i think they should represent ukraine.

I discovered Hardkiss a few weeks ago and I only listened to ‘Stones’ and ‘Make-up’ as of the moment. They are a great rock band in the Ukrainian music scene. They might also do good in Eurovision too. And I also agree for Max Barskih to participate again in the national finals. He reminds me of Enrique Iglesias of Ukraine.

I am from Ukraine. I think all ukrainians want to see Tina Karol or our band The Hardkiss at the Eurovision 2016 in Sweden. Please listen these songs:
The Hardkiss “Stones” and “Organ”
Tina Karol Zhuzn prodolzayetsya and Pomnyu
Tell me what do you think about this. Thank you very much.

I wouldn’t mind having Ani Lorak back, to finally win the contest as she should’ve done in 2008.

But talking about second chances, I would very much prefer having someone like Max Barskih back, I wanted him to represent Ukraine in 2012, and if he ever comes back, specially with a song like Nebo, which is my favourite from him, I think Ukraine would do very well.

You guys forgot Anastasia Prikhodko. She is a Ukrainian by blood (and even by birth if I am not mistaken). Plus, she vowed never to sing for and in Russia again and her career is mostly spent in Ukraine now.

Europe wants originality, you saw, that female singers are out, 80% of them failed to qualify. Ukraine must choose something different. Not only gay ESC fans are voting, but whole Europe, so your wishlist is very funny.

Og3ne is on 6th place of course.

Bring back Maria Yaremchuk. She was awesome. I’d love to see her again after 2 years of growth as an artist.

TODAY Our One & Only Unstoppable CONCHITA releases her brand new single *FireStorm*! <3 😀

Ivan Dorn is actually great! Doubt he’d do Eurovision though

Ukraine offered us (in 2012) the absolute GreAtY anthem of EURO Football Championship <3
Back in 2004 that it was Ukraine that won the Vision it was the GreAtY year of my country Greece <3
We were Champions of Europe in football…<3
But all good things come to an end un4tunately..
After 3 consecutive Euro Championships my country Greece 4 the first time will not manage to qualify & give the present to the Euro 2016 next year in France..

Ani Lorak is married with a turkish man:) <3 lover her so much

Or why not Ivan Dorn for a change?

Or even better…. Quest Pistols! They make great music and dancing. Their performance are edgy and sorta having an “in your face” impact to the audience.

Ukraine must depart from their status quo sometimes, as long as their people are comfortable about it.

VIA GRA is my guilty pleasure.

But I also prefer Anna Sedokova (also an ex-Via Gra member) to participate in Eurovision in the near future.

What about Masha Sobko and Jamala..?? Both are really beautiful and they sings with much elegance.

I’d love Svetlana Loboda to make a return. What a star <3

(Wouldn't say no to Ani Lorak either!)

You people left Max Barskih out of the list. He’s so artistic and creative. Check out “Po Freydu”, “Heroine”, “Otpusti Menya” and his English language songs. They’re all great.

Mario you are asking Ukraine to send a man? Do you know this goes against years of Ukrainian Eurovision tradition?

Vera Brezhneva would be awesome. Via Gra used to be pretty good, and at times was awesome. But the latest incarnation is not – they would be embarrassingly bad.

I would want Viktoria Petryk, Illaria, neAngely, or Via Gra.

I personally would love to see Tetyana Shyrko; “Feeling Like a Sir” is a nice little gem that fell through the cracks.

Mario ~ Max Barskih To Represent Ukraine In Our Vision!

I think that all 5 are great choices but doesn’t Ukraine select their partcipatants through national selections ? I highly doubt any of those would participate in the national final. Ukraine is my favorite Eurovision country but even I’m sick and tired of them sending a female pop song. They need something different. Their last male performer was 2005 (excluding Verka)

And yes, why is it always a (sexy) woman singing a similar sounding pop-song with an over the top gimmick every year? Do men in Ukraine not sing? and are there no other genres of music in Ukraine?
People complain alot about Balkan ballads sounding the same, but never mention anything about Ukraine’s participation? I’d like to see Ukraine come back, and try something a little less safe for once.

I can give or take Ukraine at Eurovision really. There are certain years where I really thought they didnt deserve to qualify, but end up in the Top 10, every year. They really shouldn’t have qualified in 2010, 2011 or 2012.and they rely too heavily on gimmicks, the song could be terrible but they would have some odd- out of place contraption. In saying that, I loved them in 2004, 2007, 2008 and yeah, even 2009. But Welcome back in 2016, as a European nation, I would much rather see them participate over Australia and China. But I already know… Read more »

Suppose it would be too much to ask Ukraine to bring something other than a woman with a pop song for once?

I still want Ruslana to come back.

They’re all so beautiful!!! :O

Eurovision is not their level. None of them will not do it. Will a new name. I’m from Ukraine 🙂