It’s been a couple of days now since the EBU and Swedish broadcaster SVT announced the all-important host city for Eurovision 2016, and as we save every dollar ever before heading to Stockholm next May, there is growing speculation that Melodifestivalen alumni, Alcazar, may be bringing some severe schlager realness to the hosting role next year! Ah-ah we’re gonna party tonight!

Swedish blog finest.se are reporting that Alcazar are rumoured to be the frontrunners for the coveted job in next years’ contest. And the reasons behind the potential decision totes make sense.

And as Andreas told us earlier this year, Petra Meade is his BFF – she’s sure to have plenty of presenting advice for him.

As well as their involvement with Melodifestivalen, Alcazar also have connections with Eurovision. In 2006 Andreas was part of the pan-European group six4one which represented Switzerland with the Ralph Siegel song “If We All Give A Little”. Alcazar made their first Eurovision appearance in 2014 as the spokespeople for Sweden – the first time three people had been allowed to deliver points together.

Poll: Who should win the OGAE Second Chance Contest 2015? 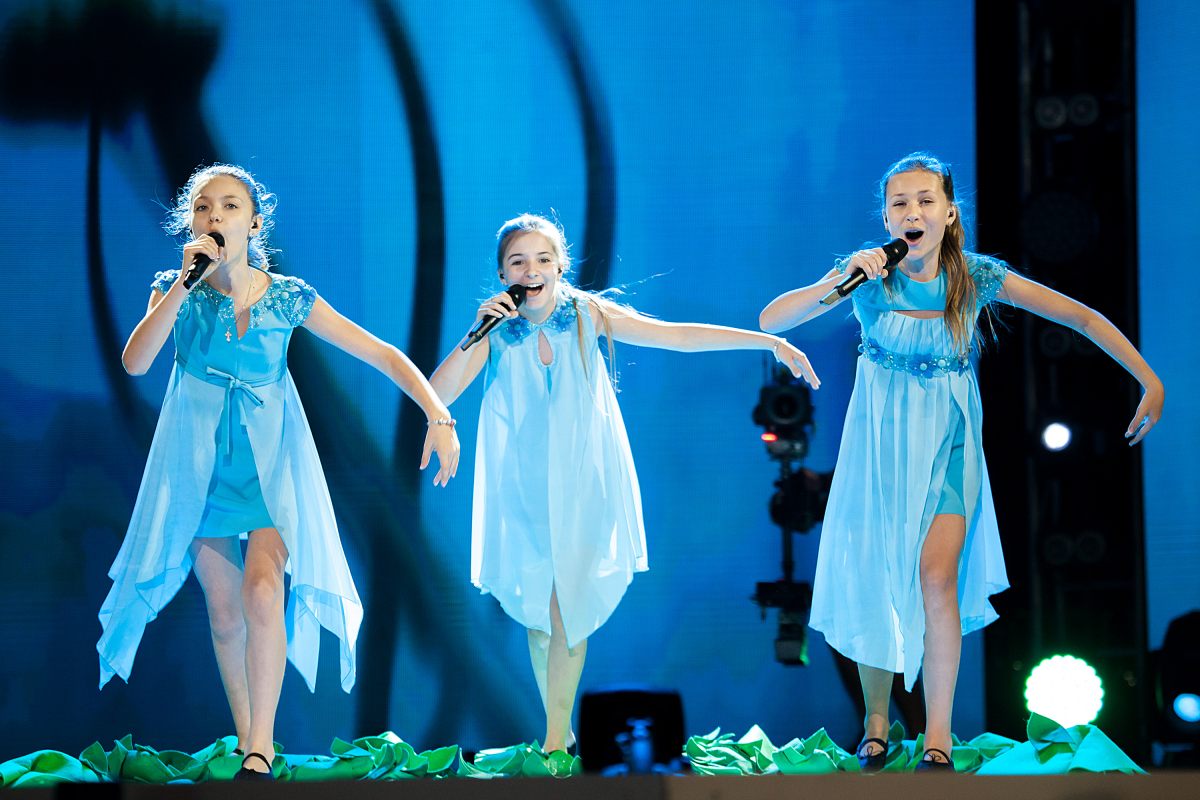 I’m all for either one or both of their last 2 winners (Måns and Loreen) hosting.

I think it’d be really fun to have Alcazar as the hosts. They can sing, dance, and really get the energy up in Stockholm!

Here’s who I would like to represent Sweden: Alcazar Molly Sanden Danny Saucedo Mariette Agnes Petra Marklund (September) Robyn Lykke Li (Will she follow rivers to Stockholm.) Andreas Johnson (Living to Die was fantastic.) Here’s who I want to HOST Eurovision: Sarah Dawn Finer Robin Paulsson Dolph Lundgren Gina Dirawi Petra MARKLUND (Not Petra MEDE.) Alex Skarsgård I love Petra Mede. I think she’s absolutely hilarious. But I think it would be kind of uncreative and slightly lazy to hire her to host Eurovision again. If she does, good enough so. I find that when the reigning champion is hosting… Read more »

I would rather Alcazar represent Sweden next year. I actually think they could give Sweden their 7th win in Eurovision (The tie breaker with Ireland.) next year.

Stick to singing instead.

HELL NO. That would be a massive step back. The contest has been getting more sofisticated as the years go on. None of that trash thank you.

I’d quite like the Melodifestivalen 2012 trio of Gina Dirawi, Sarah Dawn Finer (as Sarah not Lynda) and Helena Bergström. They brought so much to the shows and already work together well as a trio, plus they’re all experienced.

However there are lots and lots of people who would make good hosts in Sweden.

no thanks. I bet Sweden has relevant names to suggest for hosts, and maybe persons that it’s their job to host shows?

Alcazar are too cheesy and gay.

mods? hello? is anyone there?

Is everything in ESC should be related to gayness and else? I’m so tired with all those things and all Wiwibloggs article that always relate gay topic to most of articles. I thought i’d move to other ESC blog which is more relevant

#TeamAlcazar all the way. I think they’ll do a really good job. This year’s trio came in a bit dull rather than funny/acceptable/nice/likeable. As far as an entertainer doing it, it’s not a bad idea for me.

I’d rather see them or Måns, Sanna & SDF doing it. But keep the three people hosting thing alive, it’s good and most years since 2010 has been like the new norm.

it would be cool if it is true. I hope Christer Björkman chooses Alcazar.

@ And that was not out of the blue as I was refering to another member obviously but you were even too dumb to just notice that..
Oh Mei get your brain out of your @*s….Like you exactly wrote me to do the same myself..

@ Mei
Like i posted here so inapropriate comments??
Omg with you….Do me a favor please & just shut your sh**ty mouth you b**ch..

God Mario you have the worst comments ever. Not everything is about sex or being gay. Get your head out of your ass.

In my view, it would be a bad choice, and I hope I will not turn out to be true. Sorry, but Alcazar is associated with what I don’t like at Eurovision at all nowadays, i.e. kitsch and cheesy music. They would have been maybe more appropriate as hosts ten years ago, but not now. Basically, I can understand why so many fans here would support such a choice – the band has been very popular in Melodifestivalen. Still, I would prefer to see for example Mans and Loreen.

I would throw myself off a bridge of this happens. Can’t stand them or their music. Please SVT don’t screw this up.

Alcazar would be a very nice choice but i would love this trio: Sarah Dawn Finer, Petra Mede and Gina Dirawi

@ Well only Andreas is the gay homosexual one in the 3 membered Alcazar pop disco group so better just chill out & not get really stressed about our Vision finally embrace its gayness in full scale..

So, is ESC finally embracing its gayness in its full glory? Pathetic.

No, please don’t screw this up, SVT!

NO! I want to see Sarah Dawn Finer as the host!

perfect choice and the got the most important factor CHEMISTRY !!!
but can they speak french ???
would be amazing entertainers …

Alcazar would be fantastic! Absolutely fabulous hosts.
Petra was good but she’s had her turn. She can have the green room.
Lynda Woodruff would be best checking tickets at the front door.

Well Petra is amazing & did great job in Malmo’s Vision indeed..
But maybe it would be boring to have the same host presenting the EuroVision again for one more time after just 3 years only since 2013..
And note that Petra was chosen to be the hostess of the Greatest Hits Party in London this year 4 the 60 years of our Vision..
So it might be too much 4 picking Petra to host the 61st ESC of Sweden next year..
I just don’t know..

If it is true, Eurovision might have just got the craziness and fun it needs. Still prefer Petra Mede though.

To the people suggesting Mans or Lynda (please, no!) – there are a multitude of excellent professional television hosts in Sweden ready and willing to do the job, perhaps you’ve never heard of them, but they’re there.

They are not a good choice!!!The should better put “Lynda Woodruff” and Mans Zermerlow to do the hosting. And someone else with them.

Oh…Thats my bad… 😛
I really had thought that Alcazar were about to host the Melodifestivalen & NOT EuroVision..:P

Well to choose them of being the hosts of our Vision is another different story…
But…I’m not negative on them getting picked 4 the job..
I don’t mind at all.. 🙂
They will gonna do really good job i guess 🙂

OMG. No!! No jokes, a little bit of class, please. I’m for Måns Zelmerlöw all the way. We can party anyway. And by the way, the blog reporting this make their living spreading rumours. “Stir it up, lay it down”. That’s all.

No way, definitely not! They are like an early noughties pop group reject. Please no, they are so cheesy and fake. Zero chemistry. C’mon Sweden, do a professional production, dont make a big joke out of it just because yo will probably be hosting again in 2017 or 2018. Petra Mede, Mans Zelmerlow and Danny Saucido for the main shows and Sarah Dawn Finer (As Lynda Woodruff) for the green room.

It would be a pretty cool choice.

If Alcazar get chosen to be the hosts of Melodifestivalen then 3 acts are the hot favorites 4 hosting the upcoming EuroVision..
These are of course Mans ~ Petra ~ Sarah

Yeah why not…GreAtY choice… 🙂 They have so energy & they are fun 🙂 At least for Alcazar being the hosts of Melodifestivalen 2016 would be cool 🙂 They were Sweden’s points spokepersons last year in Copenhagen’s Vision.. They must be totally experienced to do this.. They might didn’t manage to win anytime from the 3 times that they compeated on Melodifestivalen but they finished on really high position all these three times.. They have met big success with their songs not only in Sweden but in Europe as well.. Songs like *Crying At The Discoteque* & *This Is The… Read more »

That would be great actually, it isn’t hosted in a giant discoball for nothing!xD

Hell yeah. Lets do this! Blame it on SVT, blame on Mans, we gonna PARTY TONIGHT!!!

Next year I mean.