Say what you will about Belarus’ government, but when it comes to Eurovision 2016, they are handing power to the people.  Today BTRC revealed that the winner of its national selection will be determined 100% by the televote. Bye, bye juries! The news comes following a meeting of the permanent members of the broadcaster’s Eurovision steering committee. The head of delegation firmly believes that an audience-only vote “is the most transparent method” and will produce “a worthy challenger” for Stockholm.

Last year Uzari & Maimuna placed third with televoters, but made it to Vienna by winning the support of the jury. They ultimately finished 12th in their semi-final.

Not the only change

As we previously reported, Gennady Davydko, the chairman of BTRC, has already said that Belarus will shift its focus to the Belarusian national language. Belarus will once again hold a national selection in order to pick its act for ESC. But unlike in previous years, the selection committee will give preference to songs with Belarusian lyrics. “We intend to look for next year’s song in the Belarusian language,” he said. “We aren’t excluding songs in English, Russian, French, or even in Hindi, but preference will be given to those in the Belarussian language.”

Are you pleased to see Belarus shift to a televote-only policy? Who do you want to sing for Belarus? You can let us know in the comments box below. 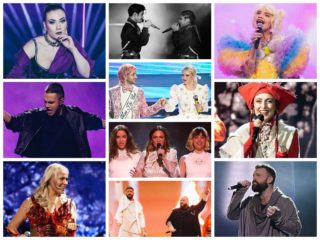 Televoters or juries … all of this is irrelevant if the main thing ain’t in place: some GREAT songs … but some countries, tv stations, fans seem to always focus their utmost attention to everything else.

Sounds too good to true, i’m not convinced, previous winners/songs have been replaced before.

Belarus was my favourite this year! Still am not over them not qualifying. While I love the shift to the Belarusian language (JESC 2014 last year was in the language and was also my favourite) I think the lack of jury will produce a bad song. I feel this change is due to Milki not winning the NF!

But the televote voted for a horrible song.

So Europe’s last dictatorship has figured out that the jury is too anti-democratic. If only the EBU could embrace democracy to the same degree Belarus does…

Muzzart ran ads during the commercial breaks (at least that’s what I’ve heard) and they finished 1st in televote this year… well, if Belarus is going to do this, then they’d better tighten their promotion rules!

Let’s just wait until Lukashenko decides the vote is “wrong.” (whatever “wrong” is)

I’m not going to hold my breath. There wasn’t one song that was Eurovision worthy in their last national final. They’ll still end up with an average song that won’t qualify, or somehow it will qualify but end up on the bottom.

What Belarus has to do now is to select those 10-15 songs in their NF wisely. Thez need to be of good quality. All of them. But, who the hell am I kidding, the winning act may change his/her song at the end. Ah, Belarus, your drama is never boring. 🙂

Down with this sort of thing.

Pure televoting … ummm … and that is going to change the game for Belarus because …? They are still going to face 50% juries at Eurovision and the televoters from every other country except their own … And Rybak forgot one detail: he owns his little cheesy Fairytale win in 2009 due not only to televoters but also the juries … how easily people forget things.

Should have had it last year tbh, hehe.
Hope for some more great songs like the last years 😛

I don’t think 100% tele voting is a good thing.
Novelty acts could win, it can be corrupted (remember the accusations that artists vote for themselves), and trashy acts like Mlki could win.

So that another group like Milki can win a ticket to Stockholm with a very average song? Oh well…

Belarus you can not scape away the scandals. Remember Alyona Lanskaya in 2012. Telovoting is not 100% clean