Malta’s Destiny Chukunyere bobbed her head, dropped some major attitude, and kept her vocals pitch perfect during her first rehearsal at Junior Eurovision 2015. The LED backdrop comes directly from her funky music video: it’s all bright colors, fun lettering, and pulsating soul realness. She stands on stage alone — with a voice that big, you really don’t need help — and does a good job connecting with the camera. She wore all black this morning with glittering silver shoes and a matching silver scarf providing the only accents. We suspect she has a surprise up her sleeve for her second rehearsal: wearing all black, she kind of disappears into the background which is quite dark.

The camera angles were initially underwhelming, but in subsequent takes producers revealed a few of their tricks. They panned in from behind the illuminated arches which flash “not my soul” — it adds real dynamism — and also from overhead, showing off the LED floor which at times matches the wall. The bridge sees a camera spin around Destiny who sings direct to camera. It’s a dizzying and delightful touch. The number ends with Destiny working the runway stage left. She wants to be among the people and with her fans! 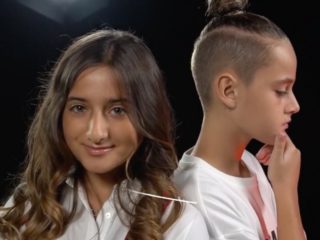